Frankly, watching Ridley Scott's Blade Runner is recommended to Prometheus analysts who wish to understand the genetic engineering of both treatments, more so that re-viewing the Alien films. (Of course, what might be happening on 10.11.12 - October 11, 2012 or November 10, 2012 - from the Weyland Corporation, remains to be understood.)

The term replicants is used nowhere in Philip K. Dick's writing. The creatures in the source novel are called Androids or Andies. The movie abandoned these terms, fearing they would sound comical spoken on screen. Replicants came from screenwriter David Webb Peoples' daughter, Risa, who was studying microbiology and biochemistry. She introduced her father to the theory of replication - the process whereby cells are duplicated for cloning purposes. (Peoples' is also known for his screenplays on Unforgiven and Twelve Monkeys.)

Replicants are slaves, and this movie is about slavery. As William Kolb writes in Blade Runner Film Notes: "Nexus is a Latin word meaning ‘to bind’ and refers to the tie between members of a group, e.g. members of a series. The replicants who arrive on Earth are literally and metaphorically the Nexus-6." 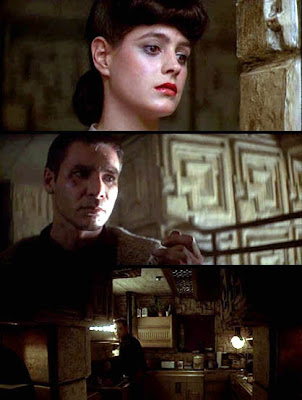 
Various random synchromystic tidbits that make Blade Runner all the more enjoyable to watch during this 30th year, include:

Philip K. Dick first came up with the idea for his novel Do Androids Dream of Electric Sheep? in 1962, when researching The Man in the High Castle which deals with the Nazis conquering the planet in the 1940s. Dick had been granted access to archived World War II Gestapo documents in the University of California at Berkley, and had come across diaries written by S.S. men stationed in Poland, which he found almost unreadable in their casual cruelty and lack of human empathy. One sentence in particular troubled him: "We are kept awake at night by the cries of starving children." Dick was so horrified by this sentence that he reasoned there was obviously something wrong with the man who wrote it. This led him to hypothesize that Nazism in general was a defective group mind, a mind so emotionally flawed that the word human could not be applied to them; their lack of empathy was so pronounced that Dick reasoned they couldn't be referred to as human beings, even though their outward appearance seemed to indicate that they were human. The novel sprang from this.

While the film is loosely based on Philip K. Dick's Do Androids Dream of Electric Sheep, the title comes from a book by Alan Nourse called The Bladerunner. William S. Burroughs wrote a screenplay based on the Nourse book and a novella entitled Blade Runner: A Movie. Ridley Scott bought the rights to the title but not the screenplay or the book. The Burroughs composition defines a blade runner as "a person who sells illegal surgical instruments."


In the strange Japanese advertisement shown on the side of a blimp, in which a Geisha-like woman is swallowing a pill, the loud speakers play a line from a Japanese Noh play, saying "Iri Hi Katamuku," literally "the setting sun sinks down." According to special photographics effects supervisor David Dryer the pills being swallowed are birth control pills.

Among the folklore that has built up around the film over the years is the infamous Blade Runner Curse, which is the belief that the film was a curse to the companies whose logos were displayed prominently as product placements. While they were market leaders at the time, many of them experienced disastrous setbacks over the next decade and hardly exist anymore. RCA, for example which at one time was the leading consumer electronics and communications conglomerate, was bought out by one time parent GE in 1985, and dismantled. Atari, which dominated the home video game market when the film came out, never recovered from the next year's downturn in the industry, and by the 1990s had ceased to exist as anything more than a brand. The Atari of today is an entirely different firm, using the former company's name. Cuisinart similarly went bankrupt in 1989, though it lives on under new ownership. The Bell System monopoly was broken up that same year, and all of the resulting Regional Bell operating companies have since changed their names and merged back with each other and other companies to form the new AT&T. Pan Am suffered the terrorist bombing/destruction of Pan Am Flight 103 and went bankrupt in 1991, after a decade of mounting losses. The Coca-Cola Company, although still tremendously popular, suffered losses during its failed introduction of New Coke in 1985. 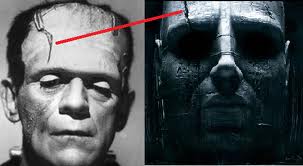 The (Frankenstein's Monster) giant head in Prometheus alludes to the fact the aliens & humans are Frankensteins, genetic engineers. Eldon Tyrell filled that role in Blade Runner, and Peter Weyland in Prometheus. The humanoid alien giants are too. 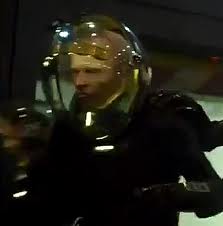 
Sources on linkages and symbolic connections in Blade Runner and Prometheus are to be found in the hundreds throughout the Internet, and specifically include various trivia authored by many contributors to IMDb and these movies' critics' websites. Additionally, Wikipedia has been used, when appropriate, for general information that is well-cited and generally known. Please do your own background original research, if you wish, to dig into any specific area discussed. For more insights on Prometheus, please see also here.

The term synchros (short for synchromystic practitioners) was coined by Loren Coleman at the Twilight Language blog to capture the spirit of the researchers, chroniclers, and bloggers who employ active synchromystic analysis, in the tradition of James Shelby Downard and other twilight language intellectuals (as noted here).

Synchros examine the world through a variety of methodologies, including the following:

Onomastics or onomatology is the study of proper names of all kinds and the origins of names. The word is Greek: ὀνοματολογία [from ὄνομα (ónoma) "name"].

Toponymy or toponomastics, the study of place names, is one of the principal branches of onomastics.

Anthroponomastics or anthroponymy, a branch of onomastics, is the study of anthroponyms (anthropos, "man," + onuma, "name"), the names of human beings.

Etymology is the study of the history of words — when they entered a language, from what source, and how their form and meaning have changed over time. In languages with a long detailed history, etymology makes use of philology, the study of how words change from culture to culture over time. The word "etymology" itself comes from the Ancient Athens ἐτυμολογία (etumologia) < ἔτυμον (etumon), “‘true sense’” + -λογία (-logia), “‘study of’”, from λόγος (logos), "speech, oration, discourse, word."

Posted by Loren Coleman at 5:10 PM

Loren,
From what I've read, the date 10/11/12, will be the release date of the Prometheus dvd. Apparently, the filmakers plan to continue viral marketing using the Weyland Corp. website at least until the dvd release.

I saw Prometheus yesterday, and despite its flaws I enjoyed it.

What I liked more about the movie is that the Engineers' look seemed to have been influenced by William Blake's paintings. For example, this one: Satan in Glory.