The ultimate Fayette Factor movie is on its way. 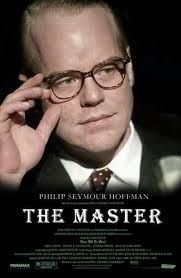 Coming sooner than you can imagine is The Master, directed by Paul Thomas Anderson. The movie reportedly is about "The Cause," a seemingly disguised religion that has been compared to Scientology.
It is due for release on October 12, 2012.
Philip Seymour Hoffman plays a character named "Lancaster Dodd." Dodd has a great deal in common with Scientology founder L. Ron Hubbard (1911–1986).  One item being mentioned on locations such as Wikipedia is that Hubbard "served in the U.S. Navy in World War II and after his release from the hospital founded the belief system" today called "Scientology" in 1952.
In The Master, 1952 is the year for the founding of the film's religion too.
That's L for Lafayette, by the way, in Hubbard's name.


How deeply will this film explore the amazing fabric that is there to examine?


Even one-third of the occult material available from the life of L. Ron Hubbard would be intriguing to view via Anderson's directing abilities:

In August 1945 Hubbard moved into the Pasadena mansion of John "Jack" Whiteside Parsons. A leading rocket propulsion researcher at the California Institute of Technology and a founder of the Jet Propulsion Laboratory, Parsons led a double life as an avid occultist and Thelemite, follower of the English ceremonial magician Aleister Crowley and leader of a lodge of Crowley's magical order, Ordo Templi Orientis (OTO). He let rooms in the house only to tenants who he specified should be "atheists and those of a Bohemian disposition."
Hubbard befriended Parsons and soon became sexually involved with Parsons's 21-year-old girlfriend, Sara "Betty" Northrup. 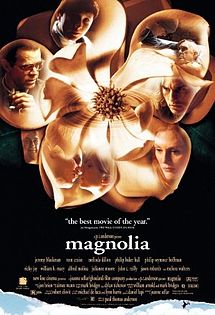 Paul Thomas Anderson is also the director of Magnolia, the 1999 film which has become a Fortean classic, complete with frog falls, Charles Fort book covers, synchronicity incidents, and more. My chapter examining the 1999 film more closely is entitled, "The Teleporting Animals and Magnolia," and is in my book, Mysterious America.
Posted by Loren Coleman at 3:23 PM

So they chose Columbus day as the release date, huh?

Subliminals are all over that "Magnolia" poster.

That is a Masonic "A" in the poster, resembling the compass and square.