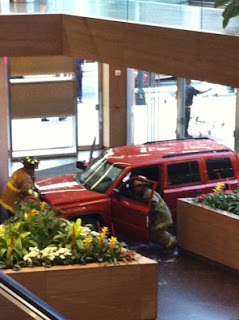 First responders arrive at the scene of a SUV that crashed into the lobby of a building at Connecticut Avenue and L Street NW, Washington, D.C., Friday evening, June 8, 2012. Photo courtesy: Maureen Mathis. 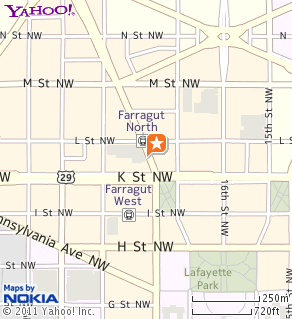 North of Lafayette Park (see "Fayette Factor"), the patio at the Connecticut Avenue location of Morton's The Steakhouse overlooks Washington D.C.'s infamous K Street Corridor, and the Bar is known locally as a relaxing retreat for the government elite. But the calm was disturbed Friday evening, about 7:30-7:45 pm. One floor below, chaos visited.

“I felt a crash,” said a female eyewitness who was in the bar area of Morton’s The Steakhouse. “I kind of heard it.” She said someone in their group asked facetiously: “Is the building collapsing? Should we try to get out?”

A vehicle had smashed through plate glass and into the building, one floor below the bar, on the southwest corner of Connecticut Avenue and L Street NW. It came to a stop at a building column in the lobby.

The woman, the double-initialed Maureen Mathis, a law student working in D.C. for the summer, said the red vehicle, apparently a Jeep, was in the lobby. Mathis said the man who appeared to be the driver struggled with building security officers, then with police. Mathias shared her photo of the scene with the media.

“Everyone said it was a miracle that no one was hurt,” Mathis said.

With its similarities to car bombings, the crash provoked a vigorous response. Members of the FBI's Terrorism Task Force and D. C. police were there quickly. Even though the FBI’s Joint Terrorism Task Force was at the scene, but there was no immediate indication late Friday of a terrorist link. The motive was unclear. Police said the car had been stolen.

D.C. Police Chief Cathy L. Lanier noted the crash was indeed done deliberately. One or more containers of gasoline were in the vehicle and that gasoline had been poured on or in it. Mathis mentioned to reporters she had seen one container of gasoline removed from the red vehicle. Investigators stated flatly that the spreading of the gasoline inside the vehicle had been done "intentionally."

The entrance to the Farragut North Metro station at that corner was closed after the incident while police investigated.

The Metro stop was named after David Glasgow Farragut (July 5, 1801 – August 14, 1870), who was a flag officer of the United States Navy during the American Civil War. He was the first rear admiral, vice admiral, and admiral in the United States Navy. He is remembered in popular culture for his order at the Battle of Mobile Bay, usually paraphrased: "Damn the torpedoes, full speed ahead!" by U.S. Navy tradition.
Posted by Loren Coleman at 9:36 AM