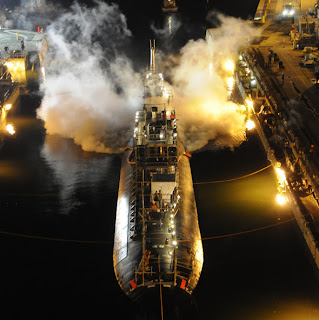 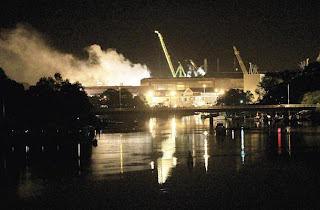 The Navy Times published this:


A Maine shipyard is investigating what caused a small fire outside a nuclear-powered submarine that was severely damaged by another blaze last month.
The fire was reported about 7 p.m. Saturday in the dry dock where the Miami is located, The Portsmouth Naval Shipyard said.
A shipyard employee doused the fire with a portable extinguisher before the shipyard’s fire department arrived, and the ship’s reactor was never in danger, officials said. No one was hurt. The shipyard did not release additional information.
The latest fire was reported less than four weeks after a May 23 fire heavily damaged the submarine while it was in dry dock for an overhaul. That fire damaged the torpedo room, crew quarters, and command and control areas in the front of the submarine, but the nuclear propulsion components at the back of the sub were spared.
The Navy has estimated repair costs at $400 million (see Miami repair estimated at $400M). 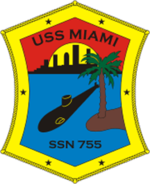 For more on the post-May 23rd regulations that were installed, see all of the article here.

The Portsmouth Naval Shipyard Fire Department responded to a report of another potential blaze aboard USS Miami on June 6, but it turned out to be a false alarm (see Firefighters respond to false alarm on Miami).

As I noted earlier (see here), the intriguing timing of the original fire of the USS Miami at the Maine shipyard, and the disruptive flights landing in Miami and Maine served as sorts of foreshadowing of some immediate weird incidents. These events were precursors to the wild but brief outbursts of synchromystic cannibal news that began in Miami.

In the wake of cannibals, what might be ahead as we rush to the naturally strange St. John's Day on June 24th, with its fires and Forteana?
Posted by Loren Coleman at 8:39 AM