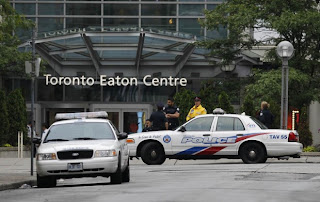 Update: Police said on Sunday, June 3, 2012, they believed they knew the identity of the shooter and said the victim, 24-year-old Toronto resident Ahmed Hassan, may have had some gang affiliation.

"Our investigation clearly suggests that this is a targeted shooting and not a random act of violence against the members of the general public," Brian Borg, a Toronto police detective,
said in a media briefing on Sunday.

On Monday, June 4, 2012, a suspect was reportedly arrested, according to police sources.


There was a shooting at the Toronto mall on Saturday evening, in which several people were wounded. Reports tell of a 13-year-old boy and a 20s-30s year old man being taken to local hospital. Latest media accounts tell of one dead, and seven wounded. The suspect has not been caught. 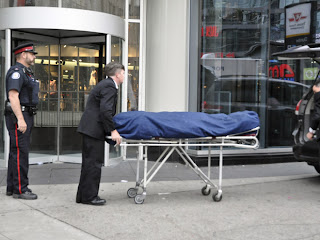 Canadian shooting incidents like this are rare, due to Canada's restrictive gun laws.


The Toronto incident revived memories of another shooting that happened just north of the Eaton Centre on December 26, 2005, Canada's Boxing Day holiday, in which a 15-year-old girl was killed and several other people were wounded. That shooting was believed to be gang-related.


On September 13, 2006, at Dawson College, Montreal, when Kimveer Gill, a 25-year-old shooter, opened fire, killing Anastasia De Sousa, 18, and wounded 11 other students. Police fired on him. Then Gill turned the gun on himself.

In 1989, a lone gunman targeting women killed 14 people at a Montreal university, an event that became known as the Montreal massacre. The École Polytechnique Massacre, also known as the Montreal Massacre, occurred on December 6, 1989 at the École Polytechnique in Montreal, Quebec, Canada. Twenty-five-year-old Marc Lépine (born of a French-Canadian mother and Algerian father), armed with a legally obtained Mini-14 rifle and a hunting knife, shot twenty-eight people before killing himself. He began his attack by entering a classroom at the university, where he separated the male and female students. After claiming that he was "fighting feminism," he shot all nine women in the room, killing six. He then moved through corridors, the cafeteria, and another classroom, specifically targeting women to shoot. Overall, he killed fourteen women and injured ten other women and four men in just under twenty minutes before turning the gun on himself. 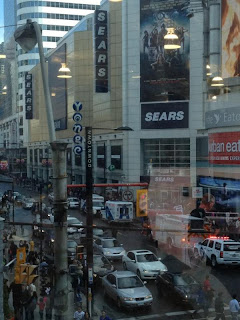 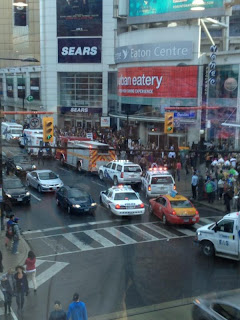 Brett Lawrie tweeted these images of the scene outside Eaton Centre.
The food court shooting at the Eaton Centre mall had one high profile earwitness, Blue Jays 3B Brett Lawrie. The afternoon game between the Toronto Blue Jays and the Boston Red Sox (the Sox won 7-4), left team members a bit of free time on their hands.

Lawrie (@blawrie13) was one of the first people to tweet about the shooting. His rapid fire messages gave some sense of the urgency of what he was experiencing.

Pretty sure someone just let off a round bullets in eaton center mall .. Wow just sprinted out of the mall ... Through traffic ...

People sprinting up the stairs right from where we just were ... Wow wow wow

This is serious .. Oh my god

The Eaton Centre mall is located in the heart of Toronto's downtown, and encompasses two city blocks along Yonge Street, stretching from Dundas Street in the north to Queen Street at the south. Subway trains were bypassing Queen and Dundas stations immediately after the shooting. The mall is a popular tourist destination, with more than 280 stores and restaurants. More than 50 million people walk through its doors annually.

By coincidence, Lawrie was involved with Major League Baseball's most violent, perhaps accidental, outburst of the young 2012 season.


In a game against the Tampa Bay Rays on May 15, Lawrie was ejected from a game after objecting to being called out on two consecutive strikes by umpire Bill Miller. The two pitches in question, thought to be balls by Lawrie, were shown to be outside the strike zone on instant replay. Lawrie started down the baseline, only to hear the strikeout call, and turned and yelled. 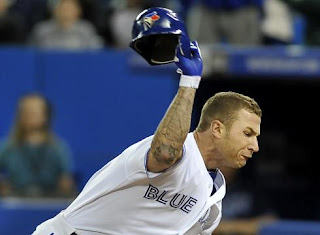 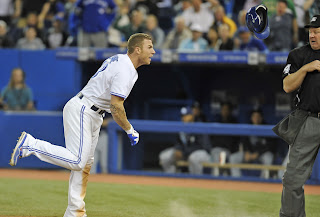 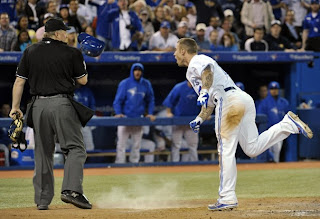 Miller then ejected him, and Lawrie threw his helmet on the ground. The helmet bounced and made contact with Miller. Manager John Farrell was also ejected after arguing with Miller. Lawrie was suspended for four games by Major League Baseball, and initially appealed the suspension but dropped the appeal on May 17.
Posted by Loren Coleman at 9:28 PM

In Czech Republic the Jay is called the 'policeman of the woods' as it very quick to sound the alarm against predators or the more benign humans walking in the wood.

What does Lawrie being tossed from a baseball game have anything to do with the shooting in the mall. Reporters have nothing else to fill the page with.

Big fire in NM started by lightning strike in Whitewater-Baldy. The community of Mogollon is mentioned which also lends its name to the Mogollon Monster

The 2005 Boxing Day Shootout is an important event in Canadian history because it occurred during an election.

The resulting moral panic (based on the unspoken racial-social dynamic of poor, black, gang-banger boys killing a rich, photogenic, teenage white girl) catapulted the Conservative party into power in Canada and they have remained there ever since. Electoral polling data gives serious statistical evidence to this correlation.