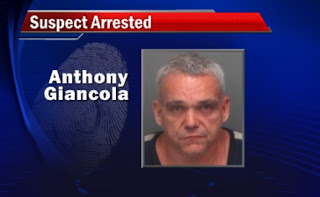 Anthony J. Giancola went on a rampage in Florida on Friday, June 22, 2012. When arrested by police, what he said was to the point:


Anthony J. Giancola...made this declaration, according to Pinellas Sheriff Bob Gualtieri:"You're going to be proud of me because I just killed 10 drug dealers."In Giancola's wake: four people stabbed, two fatally; two people severely beaten; and five others rammed by his car.The rampage, authorities said, began at 5100 35th Way N, a group home for the hearing impaired.Giancola, a 45-year-old former Tampa middle school principal busted for buying crack cocaine five years ago, stabbed four people there, authorities said.Justin Lee Vandenburgh, 27, and Mary Anne Allis, 59, were killed. Two others, both women, were injured.
...At 11:30 a.m., barely a mile and half away, Giancola pulled into the parking lot of Kenvin's Motel, an aged building on Haines Road with white cinderblock walls and peeling shingles and a reputation for prostitution. In two separate rooms, authorities say, Giancola found the motel's owners and beat them with a microwave.

Giancola continued on, crashing through a porch injuring two people, and purposely running over a kid on a bike, trying to back over him. All this until Giancola was arrested after K-9 dogs tracked him to a wooded area at 66th Street and 62nd Avenue North.

The carnage was widespread. The Ledger's Kameel Stanley wrote a long detailed article about the violence.

In terms of the name game, Bill Grimstad has been alerting his correspondents to an especially active "power name" of late: Nicholas. Intriguingly, in the midst of the name behind this outburst, within  Giancola exists Nicholas.

Here is how those linkages unfold:

Gianni = Italian: from the personal name Gianni, a reduced form of Giovanni, Italian equivalent of John.


John = English, Welsh, German, etc.: ultimately from the Hebrew personal name yọ̄hānān ‘Jehovah has favored (me with a son)’ or ‘may Jehovah favor (this child)’. This personal name was adopted into Latin (via Greek) as Johannes, and has enjoyed enormous popularity in Europe throughout the Christian era, being given in honor of St. John the Baptist, precursor of Christ, and of St. John the Evangelist, author of the fourth gospel, as well as others of the nearly one thousand other Christian saints of the name.

Nicholas = English and Dutch: from the personal name (Greek Nikolaos, from nikān ‘to conquer’ + laos ‘people’). Forms with -ch- are due to hypercorrection (see Anthony, below). The name in various vernacular forms was popular among Christians throughout Europe in the Middle Ages, largely as a result of the fame of a 4th-century Lycian bishop, about whom a large number of legends grew up, and who was venerated in the Orthodox Church as well as the Catholic. In English-speaking countries, this surname is also found as an Americanized form of various Greek surnames such as Papanikolaou ‘(son of) Nicholas the priest’ and patronymics such as Nikolopoulos.

Anthony = English: from the personal name Anthony, Latin Antonius. See also Anton. a vernacular form of Latin Antonius in Spanish (Antón), German, Swedish, Czech (Antoň or Anton, short forms of Antonín), and several other languages. This, with its variants, cognates, and derivatives, is one of the commonest European personal names. Many of the European forms have been absorbed into this spelling as American family names; for the forms, see Hanks and Hodges 1988. Spellings with -h-, which first appear in English in the 16th century and in French (as Anthoine) at about the same time, are due to the erroneous belief that the name derives from Greek anthos ‘flower’. The popularity of the personal name in Christendom is largely due to the cult of the Egyptian hermit St. Anthony (ad 251–356), who in his old age gathered a community of hermits around him, and for that reason is regarded by some as the founder of monasticism. It was further increased by the fame of St. Anthony of Padua (1195–1231), who long enjoyed a great popular cult and who is believed to help people find lost things. Source

The city of Pinellas Park, located in central Pinellas County, Florida, was founded by Philadelphia publisher F. A. Davis, who purchased 12,800 acres (52 km2) from Mason and Benjamin Harrison supporter Hamilton Disston around 1911.

Photo at top: BayNews9
Posted by Loren Coleman at 11:45 PM