Jerry Sandusky was found guilty on 45 of 48 counts at
the Centre County Court House in Bellefonte, Pennsylvania on June 22, 2012. 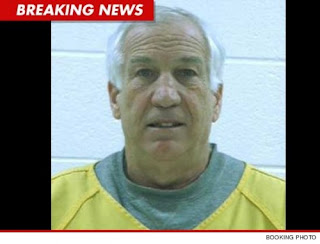 The Jerry Sandusky child sexual abuse scandal involves allegations made in 2011. The details of the incidents are horrific. Is a final act in sight? But, wait, was there a wider net that could have been thrown? I wrote earlier about whether there might be a large conspiracy here in "Does Sandusky Have Links To Hellfire Groups?" What reality is there to the hints of Sandusky scandal-linked suicides, which I discussed here?

The details of the case are well-known today, and concern charges against former Pennsylvania State University football assistant coach Jerry Sandusky and allegations of a university cover-up of those incidents. Sandusky, a longtime defensive coordinator under head coach Joe Paterno, retired in 1999 but retained access to Penn State's athletic facilities. A 2011 grand jury investigation reported that Mike McQueary, then a graduate assistant, told Paterno in 2002 that he had seen Sandusky performing a sex act on a 10-year-old boy in Penn State football's shower facilities. A holy spear in the cold water?

Paterno then reported the allegations to Penn State athletic director Tim Curley. In November 2011, Sandusky was arrested on 40 counts of molesting eight young boys over a 15-year period. By the time the trial started, the charges had reached over 50 counts.

Absolutely one of the best local Pennsylvania journalists to read (online and via Twitter) as the scandal and trial unfolded was Sara Ganim. The journalist best tracking this in the national media was Dan Wetzel. (Ah, just can't get too far from the Wetzel name game, I guess.)

In addition to the Sandusky-specific happenings, Curley and university Senior Vice President Gary Schultz resigned after being charged with failing to report the incident to police and lying to a grand jury regarding what they knew about the incident. Why the coverup? Is there a bigger picture that people are missing? Paterno and University President Graham Spanier were not charged, but both received criticism for their handling of the allegations. On November 9, Paterno announced he would retire at the end of the season, but hours later, he and Spanier were formally removed from their positions by the Penn State Board of Trustees. Paterno later died.

If you wish to read more of this history, see here, here, and here. If you wish to see how this scandal actually has now been dated back to, at least, 1995, see here. Regarding news that the victims were mostly young African-American males, for insights about that part of the story which has been ignored by the mainstrem media, see here. 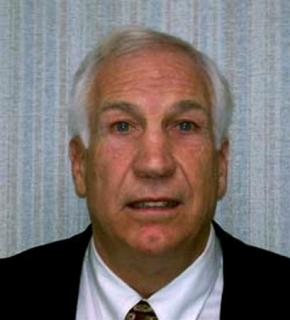 "The eyes are the window to the soul." ~ Ancient Proverb

Having worked as a psychiatric social worker, in the child protective and child welfare systems, I have been outraged by these events. Some of the testimony of the molested boys trying to be heard by adults who were supposed to have protected them has been the worst. Hopefully, good shall issue forth from these news stories in alerting people to how often such incidents do occur, and how we all need to protect our and other children from such predators.

As I read of the scandal, the phrase "Nittany Lions" was used frequently. I wondered about the alleged origins of why the school picked this name for their mascot. The "Nittany Lions" are a modern urban legend that was reinforced via an article in the Philadephia Inquirer of January 24, 2006. The news item was about three new mountain lion cubs from South Dakota being placed at the Philadelphia Zoo. The story is only the most recent felid-linked source of the supposed alleged origin of “Nittany Lion” being due to the last puma killed on the mountain named Nittany (at the end of Nittany Valley). What do we really know about this tale?

Is this the actual origin of the "Nittany Lion,"
the last mountain lion killed in Pennsylvania?

First, why "Nittany"? “Nittany” was around before Penn State, but it certainly has been used by the school (and half of the local businesses within 20 miles) for years.

What is the etymology of the term? The origins of "Nittany" are a bit obscure, but most likely the word comes from a Native American term meaning, "single mountain." Since a number of Algonquian-speaking tribes inhabited central Pennsylvania, the term can’t be traced to one single group. The description applied to the mountain that separates what is today Penns Valley and Nittany Valley, with its western end overlooking the community of State College and Penn State's University Park campus. The first colonial settlers in the 1700s adopted this term, or a variation of it, in formally naming Nittany Mountain (see William Ames' famed photograph of this location, here). Thus by the time Penn State admitted its first students in 1859, the word "Nittany" was already in use.

Following the emergence of the Nittany Lion mascot in the early 1900s, Nittany gained even more public prominence. Today, the word helps to define a host of places, services, and other entities in the Nittany Valley.

The standard line routinely goes something like this: "The Nittany Lion is the mascot of the Pennsylvania State University in University Park, Pennsylvania, USA and its athletic teams. It refers to the mountain lions that once roamed near the school, and to Mount Nittany, a local landmark. There is also a fight song played during sporting events on campus entitled 'The Nittany Lion.'"

The Nittany Lion mascot pumps up the crowd
at the 2005 football game versus Cincinnati at Beaver Stadium.

The Masonic connection is there, however. Well, at least, technically, although it is all about the name, not the Freemasons.

According to PSU sources, the mascot was the creation of Penn State senior H. D. "Joe" Mason in 1907. While on a 1904 trip to Princeton University, Mason had been embarrassed that Penn State did not have a mascot. Mason did not let that deter him: he fabricated the Nittany Lion on the spot and proclaimed that it would easily defeat the Princeton Bengal tiger. The Lion's primary means of attack against the Tiger would be its strong right arm, capable of slaying any foes (this is now traditionally exemplified through one-armed push-ups after the team scores a touchdown). Upon returning to campus, he set about making his invention a reality. In 1907, Mason wrote in the student publication The Lemon:


Every college the world over of any consequence has a college emblem of some kind—all but The Pennsylvania State College . . .. Why not select for ours the king of beasts—the Lion!! Dignified, courageous, magnificent, the Lion allegorically represents all that our College Spirit should be, so why not 'the Nittany Mountain Lion'? Why cannot State have a kingly, all-conquering Lion as the eternal sentinel?

These words later inspired the fight song known as "The Nittany Lion", which begins "Every college has a legend...".

Mountain lions had roamed on nearby Mount Nittany until the 1880s. The origin of the name "Mount Nittany" is obscure, the most commonly accepted explanation being that it is derived of Native American words (loosely pronounced as "neet-a-nee") named after the cougars that roamed the mountain or "single mountain" - a protective barrier against the elements. The name was readily accepted without a vote of the student body. In 1907, the first tangible lion symbols appeared with the placing of two alabaster African lion statues, left over from the Pennsylvania exhibit at the 1904 Louisiana Purchase Exposition, atop the columns at the main campus entrance on College and Allen streets. They were affectionately dubbed by the student body as "Pa" and "Ma." In the 1920s, a pair of stuffed mountain lions was placed in the Recreation Building to watch over athletic events. One of these original lions is now located in Pattee Library on the Penn State campus. About that same time, the tradition was established of having a student dressed in furry-lion outfits appear at football games.

The Lion Shrine
Given by the Class of 1940, the Lion Shrine is by sculptor Heinz Warnecke from a thirteen-ton block of limestone. The sculpture was formally unveiled on October 24, 1942.

In 1904, Joe Mason appears to have based the invention of the "Nittany Lion" on the African lion, not the mountain lions of Pennsylvania, but then, the urban legend around Penn State's "Lions" has a huge publicity relations machine behind it, even today. It will be working overtime as the verdict in the Sandusky trial comes in...
Posted by Loren Coleman at 9:26 AM

Perhaps they should now change their mascot from the Nittany Lion to the Scape Goat; as Sandusky appears to be symbolizing. No way he got away with all of this without others knowing and/or participating. Looks like they're going to get away without any accountability.

Dijango, yes, I discussed him here.


an article about Blade R unner and Minority Report.

Not so long after your post on Blade Runner.

Jason - can't believe he's a lone operator either.If it is the case, wonder if he'll live through the trial.

I have lived in the area, and the name is not as you say. There was a female native who fell in love with a white settler. She was dis-owned by her tribe and left with the white man. they were killed on a mountain side, where, to this day nothing will grow. the legend says it is their un-requited love that spilled with their blood and so the groundd too is barren.
That mountain side is visible as one drives to State College rte. 322

A number of strange things happened in the area in the mid nineteenth to early twentieth century, including two inexplicable plane crashes, several notorious and equally inexplicable murders followed by executions, yellow fever epidemics considered odd because of the climate and elevation, and the terrible Johnstown flood. You will find Lafayette on street maps in bellefonte, I believe.

Is it just me or does Sandusky bear more than a passing resemblance to Marshall Applewhite in some of the photographs?

I just saw the Marshall Applewhite photo.lol. He does look similar, but was not so evil.