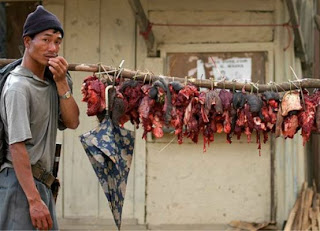 This is a new cannibal story. Due to the apparent blocking of the word "cannibal" (食人魔) by the Chinese government and/or media, the recent news of a cannibal serial killer has taken some time to be disseminated widely. (Revisit my recent overview of cannibals here.)

According to the Washington Post, on May 27, 2012, an arrest of 56-year-old Zhang Yongming in southwestern China occurred. He was accused of killing 11 people and dismembering, burning and burying their bodies to destroy the evidence. He allegedly attacked male victims walking on the quiet road near his home in Jinning county. The word "cannibal" was not used in the American story.

Details were graphically being given elsewhere (as per the photograph above).

An article in the Daily Telegraph said it all in their headline: "China's 'Cannibal Monster' Detained."

One critical sentence, tied to the headline, was this one:

Zhang, a loner who never talked to his neighbours, had previously served almost 20 years in jail for murder and was known in the village as the "cannibal monster."

Other details emerged in the story:


The man is believed to have chopped up their bodies and sold the flesh to unsuspecting consumers.
Police made the gruesome discovery during an investigation into the disappearances of male teenagers in Yunnan province in recent years, according to reports in Hong Kong and Chinese media…
…residents…had seen green plastic bags hanging from his home, with what appeared to be white bones protruding from the top.
Hong Kong newspaper The Standard said police discovered human eyeballs preserved inside wine bottles - "like snake wine" - and pieces of what appeared to be human flesh hanging up to dry when they entered Zhang's home.
Police feared that Zhang had fed human flesh to his three dogs, while selling other parts on the market, calling it "ostrich meat"...
Cannibalism is a particularly sensitive subject in China, where it was practised as a survival tactic during periods of mass starvation, for example in the wake of a failed industrialisation drive launched in the late 1950s.
Individual cases of cannibalism were also recorded during the Cultural Revolution from 1966 to 1976, when it was carried out as a symbolic act against perceived enemies of the communist cause.

"Individual cases of cannibalism were also recorded during the Cultural Revolution from 1966 to 1976, when it was carried out as a symbolic act against perceived enemies of the communist cause."

Reminds me of a passage in Mario Vargas Llosa's novel The Feast of the Goat.

After the assassins of Dominican dictator Rafael Trujillo are detained, they are tortured and set to starve until one day they are given a big bucket with a meat broth. Without thinking they plunge to the bucket and eat until the are filled; later one of their torturers return to their cell and throws at them the head of one of the conspirators' young son. The man died instantly of a heart attack :(

The spin here is known as meme-sub in the spook trade. The mega story of cannibalism in China goes under the rug. The Chinese cook soups and make pills out of abortuary products. They harvest laogai prisoner organs for profit.

Now if Winston Smith's job in the Ministry of Truth is promoting Big Government, then he needs a replacement meme for "cannibalism in China" as unapproved truth reaches Western masses. Remember, China is the model NWO state. So the replacement meme is: Look, we found a village monster! Your neighbors might be cannibals! Report on them! Don't you wish there were more government to get such monsters? Never mind those cannibal pills at herbalist shops.

To see how "arrests" are fake, look at the happy party shoot where Dominique Strauss-Kahn and his black femme accuser enjoy an evening. News stories about cannibal arrests make me laugh.

Recently, chinese in korea killed woman for the purpose of cannibal... He sliced the woman into 260 pieces and packed into plastic bag...

His name is Wu Yuanchun(吴原春).

there was a widespreading rumour on Feb of 2012 that there was a human flesh market in kyongkido, south korea, runned by chinese before the accident that chinese in korea killed a woman for the purpose of cannibal on march of 2012.