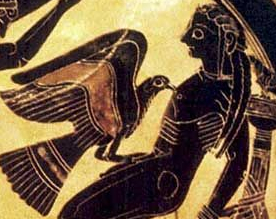 Coincidences? Synchronicity? A Maryland man was charged with killing another man and eating his heart and portions of his brain. Maryland, Miami, and many, many more, as, literally, cannibals abound. Now, a new movie opens named after a character who had his liver eaten every day. Science fiction becomes reality? Reality becomes science fiction?

The newest "cannibal attack" has occurred in Louisiana, in, yes, Lafayette Parish. (Read more about the powerful name game at the "Fayette Factor.") 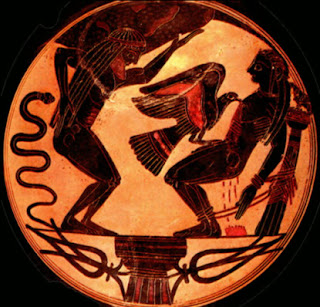 What is going on? What myths are being worked out in front of our eyes?

Prometheus (Greek: Προμηθεύς) is a Titan, culture hero, and trickster figure who in Greek mythology is credited with the creation of man from clay.  Prometheus stole fire from Zeus and gave it to the mortals, an act that enabled progress and civilization. He is known for his intelligence, and as a champion of mankind. 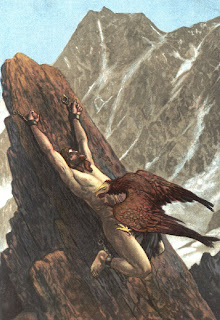 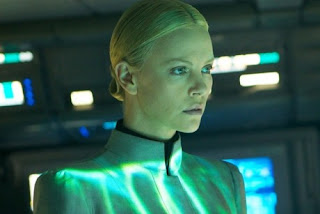 Charlize Theron plays Meredith Vickers
Today, is the date for the June 8th opening in the USA of director Ridley Scott's and producer Tony Scott's Prometheus.


In a review of Prometheus published in The Times of India, Allen O'Brien, TNN, notes one actor above all others, and additionally adds a note tied to our theme here:

The one standing tall is Noomi Rapace  (Elizabeth Shaw) who has her priorities -- religion versus science -- in place while she is out getting answers to phenomena unexplained. So what if she does not have the muscular frame and steely nerves of Alien's Riley (Remember Sigourney Weaver?); Elizabeth's willpower grows with every situation as she finally stands up to a cannibalistic alien force. Clap! Clap!

"Cannibalistic alien force"? Of course, the aliens aren't eating each other. They are eating humans. The term is being used incorrectly, but that's the way the word "cannibalistic" is employed sometimes. 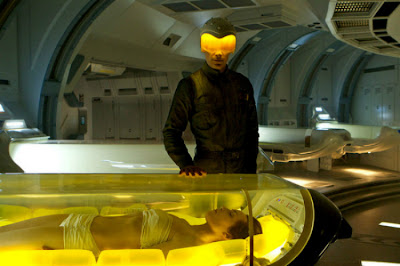 Sources on linkages and symbolic connections in Blade Runner and Prometheus are to be found in the hundreds throughout the Internet, and specifically include various trivia authored by many contributors to IMDb and the two movies commentary websites. Additionally, Wikipedia has been used throughout, when appropriate, for information that is well-cited and generally known. Please do your own background original research, if you wish, to dig into any specific area of interest to you.

Posted by Loren Coleman at 9:52 AM

Saw "Prometheus" this morning, and I don't see any particular cannibal connection, but to my eyes the film is very Fortean. The entire plot is built on the "we are property" belief, and, again to my eyes, it kept reminding me of William Bramley's "The Gods of Eden," but with humans deciding to fight back.

Thank you, Mark, for your insights.

I updated the posting with a little quotation from a review to point out the very overt "cannibalistic" theme found in Prometheus, in terms of the jargon of our times.

We should be talking about Sitchin because that's really what this movie is about. The giants genetically engineered humanity, tried to wipe us out with space monsters (the flood) and evidence of this is found in the art and monuments of ancient humans. In 2080-whatever it was this is such a novel idea, except in real life its been around since 1970 if not earlier. This movie means this idea is going more mainstream (as it slowly has been) whether it has any truth behind it is another matter. As for cannibalism and zombies....well...I would like to poo poo the whole thing and say it is all overblown B.S. but in David-Neel's Magic and Mystery in Tibet there is (if we take here reports as true) probably the best evidence of the walking dead,however that may work metaphysically. And this next part is tongue in cheek ok?: As novelty increases as we approach the Great Attractor who can say what strange surprises are in store for us? Life may look like Plan 9 From Outer Space soon!

Try the original Gemstone File - and I mean the original letters - for a continuing stream of the expression "eating liver".

Reminds me, too, of Resurrect The Dead On Planet Jupiter, which has slipped under the radar in regards to the passing away of A.C.Clarke.

Enki in tbe beginning, Enlil at the end of "Prometheus." Sitchin through and through.

Rarely go to the theatres these days so haven't seen it yet. Shades of Knights Templar occultism with the Giant Head placed within a temple-like complex in the promos and pics of the film.