"We're in the business of reporting the news, not creating it,"
says the skeptical editor Bill Rintels,
in The Parallax View. 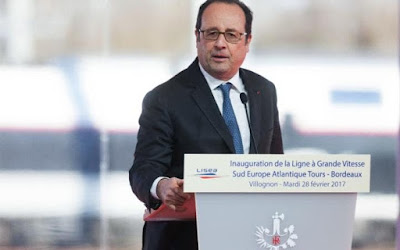 Like a scene from a modern conspiracy movie, President François Gérard Georges Nicolas Hollande was in the midst of a speech to inaugurate a new fast train line in the western town of Villognon when a shot suddenly rang out. The speech was briefly interrupted and commotion ensued.

"I hope it is nothing serious."

As it was revealed, a police sharpshooter had accidentally fired his weapon during a speech, injuring at two people.

Despite the shot, once his security team concluded he was in no imminent danger, France's Socialist leader continued talking, saying at one point: "I hope it's nothing serious."

"In fact, a police sniper stationed outside the marquee where the speech was taking place had unintentionally opened fire while changing position. One local report said the safety catch was unlocked and the gun discharged," noted the U.K.'s Telegraph.

One bullet passed through the thigh of the head waiter of a local hotel and ended up in the calf of an employee of a railway maintenance company, according to Pierre N'Gahane, state prefect of the Charente region.

Unconfirmed local media reports said that the sniper shot himself in the foot and could be seen jumping up and down.

"The sniper was on high ground when the shot went off accidentally," Mr N'Gahane told reporters. "We heard the noise, the president continued his speech. After, he came back down and entered the next room to talk to the people and to see the injured. He spoke to them for a bit and left as planned." 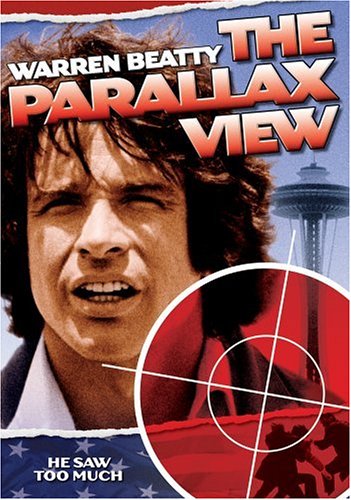 The Parallax View is a 1974 American political thriller film directed and produced by Alan J. Pakula, and starring Warren Beatty, Hume Cronyn, William Daniels and Paula Prentiss. The film was adapted by David Giler, Lorenzo Semple Jr and an uncredited Robert Towne from a 1970 novel by Loren Singer.
The plot centers on TV newswoman Lee Carter (Paula Prentiss), who is one of many witnesses to the public assassination of presidential candidate Senator Charles Carroll (Bill Joyce) atop the Seattle Space Needle. A waiter armed with a revolver is chased but falls to his death. Meanwhile, a second waiter, also armed, leaves the crime scene unnoticed. A congressional special committee determines that the assassination was the work of a lone gunman.

Three years later, Carter visits her former boyfriend and colleague, newspaper reporter Joe Frady (Warren Beatty). Lee tells Frady that she feels there is more to the assassination than was reported at the time. Six of the witnesses to Carroll's assassination have since died, so she fears she will be next. Frady does not take her seriously. Carter is soon found dead and her death is judged by the police to be either a voluntary or accidental drug overdose.

Waiters in the plot? A waiter was injured in France today.

Reminds me of another kitchen staff pictured in the midst of a June 5, 1968 assassination. 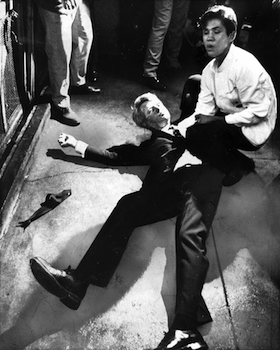 Boris Yaro's photograph of presidential candidate Senator Robert F. Kennedy lying wounded on the floor immediately after his June 5, 1968 assassination at the Ambassador Hotel. Kneeling beside him is 17-year-old busboy Juan Romero, who was shaking Kennedy's hand when Sirhan Bishara Sirhan fired the shots.
Posted by Loren Coleman at 7:34 PM

What strange behaviours during this incident. What a strange "passivity". Where were the body guards ? How could they know there wouldn't be other shots ?