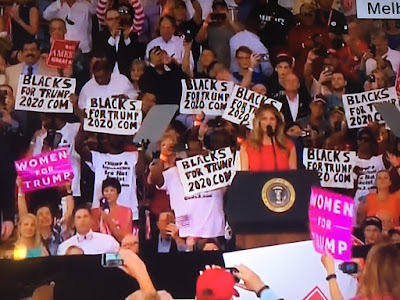 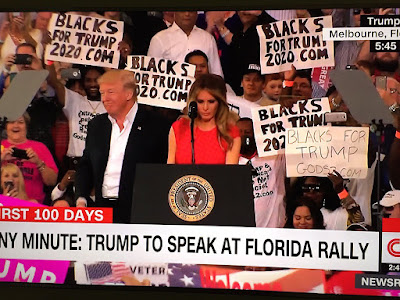 On February 18, 2017, Donald J. Trump had a campaign rally (above) in Melbourne, Florida. His advance team apparently allowed the "Blacks for Trump" people to sit right behind him.

Twitter went wild with positive tweets about this "outpouring" of AfricanAmericans supporting Trump.

But, once again, those surrounding Trump seem to not understand the reality of whom these indivuals are.

They have been around before (photo below) and many Trumpites didn't comprehend whom the "Blacks for Trump 2020" group was then either. 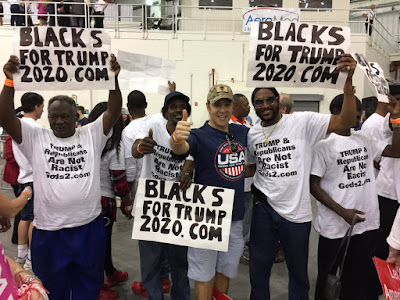 MSNBC's Rachel Maddow did a report on this story on November 2, 2016. See it here.

"The ‘Blacks for Trump’ Guy Is a Former Member of a Murderous Cult Who Thinks Obama Is the Devil" by Adam K. Raymond, October 26, 2016. New York Magazine.

It didn’t take an eagle eye to notice the “Blacks for Trump” signs just over Donald Trump’s left shoulder at his Tuesday rally in Sanford, Florida. The middle-aged white woman enthusiastically waving hers was particularly memorable. But the man next to her, a fringe political figure in South Florida who goes by Michael the Black Man, is the real star here. [Michael the Black Man, also known as Maurice Woodside or Michael Symonette.] 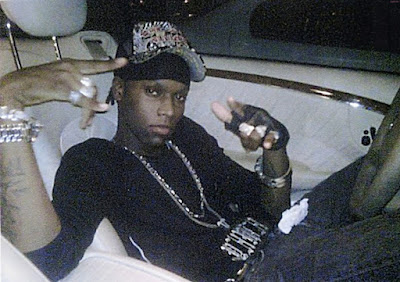 A former member of the murderous Yahweh ben Yahweh cult, Michael has found himself with front-row seats to several recent Trump events in South Florida, always waving his “Blacks for Trump” sign and wearing a shirt that says “Trump & Republicans Are Not Racist.” At Tuesday’s rally in Sanford, Trump took notice. “I love the signs behind me. Blacks for Trump. I like those signs. Blacks for Trump. You watch. You watch. Those signs are great,” he said.

Getting noticed by Republican pooh-bahs is nothing new for Michael. He appeared at a Rick Santorum event in 2012, where he declared Democrats “slave masters,” and has Glenn Beck’s seal of approval.

This success with the GOP is a credit to Michael’s fervent anti-Obama stance, which is less about policy than Michael’s belief that the president, whom he calls “The Beast,” is the Antichrist whose rise was foretold in the Bible. Not that he doesn’t disapprove of Obama’s policies, too. Michael told the Miami New Times that he believes the president’s backing of child support could bring about the extinction of the free black man.

Before he was winning attaboys from prominent members of the GOP, Michael ran with a vicious black-supremacist cult. In the early ‘90s, Michael and 15 other members of the Yahweh ben Yahweh cult were charged with conspiring in two murders, and even though his own brother testified that Michael stabbed a man in the eye with a sharp stick, he was let off by a Florida jury. In the decades since, he’s become a novel figure in South Florida, racking up criminal charges but no convictions and running a radio show that features his rants on “Demon-crats.”

The full spectrum of Michael’s political philosophy can be observed on his website Gods2.com, which he advertises on his signs at Trump rallies. It includes claims about Obama and Hillary Clinton being in the Illuminati, a video proving “that Hillary is in the KKK,” and more than a dozen personal videos related to an eviction and bankruptcy.

If Michael sounds more anti-Hillary than pro-Trump, he pretty much confirmed that stance when the Miami New Times asked him why he was voting Trump. After telling the paper he likes Trump’s plan to cut taxes, Michael added, “One reason is because Hillary’s last name is Rodham, and their family members are Rothchilds, who enslaved 13,000 slaves as collateral.” Later, he said, “I completely despise Hillary.” 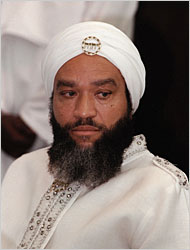 
Yahweh ben Yahweh, who, as the charismatic leader of a religious, black separatist sect in the Miami area was convicted of conspiring to murder white people as an initiation rite, died on Monday night or early yesterday in Miami. He was 71.
The cause was cancer, his lawyer, Jayne Weintraub, said.
Yahweh ben Yahweh, who wore a turban and flowing white robes and called himself the reincarnated Messiah, had started successful business enterprises and worked to rehabilitate neighborhoods in the Liberty City section of Miami and elsewhere. The mayor of Miami declared Oct. 7, 1990, Yahweh ben Yahweh Day.

Hulon Mitchell Jr. was born on Oct. 27, 1935, in Kingfisher, Okla., where his father was a granary worker and a Pentecostal minister. He was the first of 15 children and said he knew he was divine at age 3.

The motives of the "Blacks for Trump" group are not at these rallies to back Trump, but are their to support their own agenda.

I knew they were fake. My relatives were in that group, Yahweh Ben Yahweh. They were murderers