An infamous beheading incident of 2008 has a new development in 2017.

A man identified as Vince Li, a diagnosed schizophrenic, was found not criminally responsible for beheading and cannibalizing Tim McLean, his fellow passenger on a Greyhound bus in 2008. Will Baker, formerly known as Vince Li, has been granted his freedom. Manitoba’s Criminal Code Review Board has given an absolute discharge, meaning he is no longer subject to any conditions. 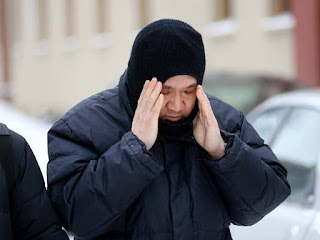 Will Baker leaves the Law Courts building in Winnipeg, after his annual criminal code review board hearing, on February 6, 2017.

Windigo can be the hairy hominoid, the cannibal giant, and the psychosis. The three are merging and swirling around in the recent story of the decapitation and eating of flesh on the Canadian Greyhound bus.

The Windigo (also known as the Wendigo, Windago, Windiga, Witiko, Wihtikow, and numerous other variants) is an unknown hairy hominoid tied to the legends and folklore of First Nations people linked by the Algonquin languages.

The Windigo is a bipedal hairy creature, equal to the Eastern Bigfoot, Stone Giant, or Marked Hominid in some classification systems, which is often said to have aggressive behaviors and a malevolent cannibalistic spirit into which humans could transform, or which could possess humans. Those who indulged in cannibalism were at particular risk, and the legend appears to have reinforced this practice as taboo.

Windigo Psychosis is a culture-bound disorder which involves an intense craving for human flesh and the fear that one will turn into a cannibal. Some ethnographers said this once occurred frequently among Algonquian cultures, though there is some sense that the psychological disorder may have been overstated and/or it has declined with Native American urbanization.

“Old Yellow Top,” a regional name for a Windigo, the original Forest Giant of cryptozoology, not psychology, drawn by Harry Trumbore in The Field Guide to Bigfoot and Other Mystery Primates.

In John Green’s Sasquatch: The Apes Among Us, the British Columbia researcher mentions the Cree in Manitoba call their Sasquatch the Weetekow, and the Saulteaux term them the Wendego. These are variations on the spelling of Windigo seen throughout Canada, but not on the hairy hominoid being described, as I discuss extenstively in Chapter 3, “Native Traditions,” in Bigfoot! The True Story of Apes in America, pages 26-34.

Writing in The Edmonton Sun, columnist Andrew Hanon points out that there is a strange overlap between a column he wrote on July 20, 2008, about the study of the psychological Windigo by Nathan Carlson, and the recent Greyhound bus decapitation and cannibalism incident of July 30.

Hanon writes on Monday, August 11, 2008, that there seems to be a “Horrifying coincidence in beheading.”


Nathan Carlson has barely slept since July 30.
“Ever since it happened, I haven’t been able to get it out of my head,” Carlson says haltingly. “I just don’t know what to think of it, quite frankly.”
The Edmonton ethno-historian is one of the world’s leading experts on Windigo phenomenon, and the recent horrific beheading and alleged cannibalism on a Greyhound bus bound for Winnipeg from Edmonton rocked him to his very core.
As the grisly details of Tim McLean’s last moments on Earth came to light in the following days, Carlson sank deeper and deeper into a fog of horror and revulsion.
Vince Weiguang Li is accused of abruptly attacking McLean, who by all accounts he didn’t even know — while McLean slept on the bus.
Up until a few days before the killing, Li held a part- time job delivering newspapers in Edmonton. He was well thought-of by his boss and considered a nice guy, if a bit quiet and shy.
On July 20 — just 10 days before the killing — Li delivered copies of the Sun that contained an extensive interview with Carlson about his research into the Windigo, a terrifying creature in native mythology that has a ravenous appetite for human flesh. It could take possession of people and turn them into cannibalistic monsters.


Below, Vince Weiguang Li, the 40-year-old suspect being transported by Canadian law enforcement personnel, and the headshot of his victim, Tim McLean.

More MySpace photos of Tim McLean, who called himself “Jokawild.”

Carlson documented several cases in northern Alberta communities where people believing they were “turning Windigo” would go into convulsions, make terrifying animal sounds and beg their captors to kill them before they started eating people.
In last month’s bus case, Li allegedly butchered McLean’s body, brandishing the victim’s severed head at the men who trapped him on the bus until police could arrive.
He was later accused of eating McLean’s flesh.
When he appeared in a Portage La Prairie courthouse on charges of second-degree murder, the only words Li reportedly uttered were pleas for someone to kill him.
A lot of his reported behaviour eerily mirrors the Windigo cases recounted in the newspaper feature that Li helped deliver to Edmonton homes just days before McLean was killed, one of the most gruesome slayings in modern Canadian history.
Several media reports called McLean’s killing unprecedented – an unspeakable, random attack the likes of which has never been seen in Canada.
But Carlson knows better.
“There are just too many parallels,” he says.
“I can’t say there’s definite connection, but there are just too many coincidences.
“It’s beyond eerie.”


As the following article is rapidly disappearing into the archives, so here is the full story mentioned above, for research purposes.

Sun, July 20, 2008
Evil spirit made man eat family
A look back at Swift Runner
By Andrew Hanon
On a cold December day in 1879, a man was hanged in Fort Saskatchewan, putting an end to one of the most horrifying killing sprees in Alberta history.
Swift Runner was executed for murdering and then eating eight members of his own family over the previous winter. He believed he was possessed by Windigo, a terrifying mythological creature with a ravenous appetite for human flesh.
It wasn’t an isolated case. During the late 1800s and into the 20th Century, fear of Windigo haunted northern Alberta communities, resulting in several grisly deaths.
Sun Media’s Andrew Hanon speaks with Nathan Carlson, one of the world’s leading authorities on Windigo, about Carlson’s personal connection to the blood-curdling creature.
Some call him a serial killer.
Others call him a desperate madman.
But right up until the trap door swung open and the rope snapped taut around his neck, one of Alberta’s most prolific murderers insisted it was an evil spirit that compelled him to butcher and eat his entire family.
Over the course of a single winter, he devoured his wife, six children, mother and brother.
MOST HORRIFYING
The man, a Cree trapper named Swift Runner, was hanged in 1879 in Fort Saskatchewan, the first legal execution in Alberta. The macabre case is considered by many to be the most horrifying crime in the province’s history.
But what most people don’t realize is that it was part of a much larger phenomenon that Edmonton ethno-historian Nathan Carlson calls Windigo condition, which haunted communities right across northern Alberta in the late 19th and early 20th Centuries and cost dozens of lives.
The Windigo (an Anglicized form of the word Witiko) is a mythological creature among native cultures from the Rockies to northern Quebec. It has an insatiable appetite for human flesh and wreaks destruction wherever it goes.
Carlson describes it as “the consummate predator of humanity.” It’s sometimes described as “an owl-eyed monster with large claws, matted hair, a naked emaciated body and a heart made of solid ice.”
“It’s extremely destructive,” he says. “The more it eats, the hungrier it gets, so it just keeps killing.”
Windigos can possess people, transforming them into wild-eyed, violent, flesh-eating maniacs with superhuman strength. Many native people in northern Alberta lived in terror of being possessed.
“It’s important to understand that cannibalism was repellent to the people,” Carlson explains. “The Windigo personified evil.”
The Swift Runner case caused an international sensation, making headlines in newspapers across Canada and the U.S.
According to accounts, he wandered alone into the Catholic Mission in St. Albert in the spring of 1879, claiming to be the only member of his family who didn’t starve to death over a particularly cold, bitter winter.
The priests became suspicious when they realized that Swift Runner, who weighed around 200 pounds, didn’t seem malnourished at all and was plagued with screaming fits and nightmares as he slept. He told them he was being tormented by an evil spirit, called Windigo, but said little else about it.
They reported their misgivings to police, who took Swift Runner to his family campground in the woods northeast of Edmonton, where they made a horrific discovery – the site was littered with bones, bits of flesh and hair. Some accounts claim that the larger bones had even been snapped and the marrow sucked out.
He eventually confessed that he shot some of his family, bludgeoned others with an axe and even strangled one girl with a cord. In some accounts, Swift Runner said he fed one boy human flesh before he too was killed.
‘THE LEAST OF MEN’
Before he was hanged, Swift Runner expressed extreme remorse. He told Father Hippolyte Leduc, “I am the least of men and do not merit even being called a man.”
Interestingly, Swift Runner is the only documented case Carlson can find of someone killing others because he thought he was possessed by a Windigo.
All other deaths he can document were cases of “Windigo executions,” where others have killed the person believed to be possessed. They were acts of self-preservation, attempts to protect their community.
In most of the cases, the victims themselves begged to be killed before they harmed their families.
In many cases, witnesses reported physical changes -bodies swelling and growing, lips and mouths enlarging. Some of the victims spoke of icy cold in their chests and an inability to warm up.
Carlson, who’s Metis, first heard about the Windigo from his grandmother, who told him about an incident at Trout Lake, where members of the community killed a man possessed by a demon that had been cursed and turned into a Windigo.
The story haunted him throughout his childhood, and after his grandmother died in 2002, he discovered an eerily similar story in an archived newspaper.
“I was somewhat confounded by the discovery of the newspaper account that seemed to confirm a story that had been in my family for almost 100 years,” he says.
Further research revealed that the man who was killed was also a distant relative of Carlson’s.
Carlson is now writing a book on the Windigo condition in northern Alberta and is negotiating with filmmakers about a documentary.

The Marked Hominid, another view of the Windigo of cryptozoology, not psychology, as drawn by artist Harry Trumbore in The Field Guide to Bigfoot and Other Mystery Primates.

Thanks to TC for the update link.
Posted by Loren Coleman at 1:59 PM

Despite humanity's progress, cannibalism just doesn't seem to go away.