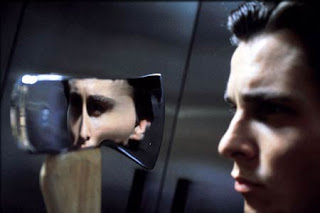 Violent movies can serve as models for violent behavior. This is a well-known fact, a subtheme of my book The Copycat Effect, and decades of research attest to popular culture inspired-murders, suicides, terror, and more. But the reality of breaking news events certainly makes it more than academic. The continuing saga of synchromystic cannibals now enters the overlapping world of films, culture, and killings.

At the end of the week, evidence mounted that Luka Rocco Magnotta, accused media-labeled "Montreal Cannibal" of 33-year-old Lin Jun, patterned segments of what he allegedly did via cinema inspirations. The primary film he used was American Psycho. 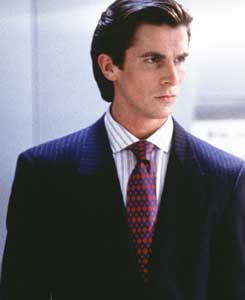 This is not the first time this specific story has been used as the model for murder. In Canada, the novel on which the movie is based, American Psycho by Bret Easton Ellis, published in 1991, was highlighted during the trial of serial killer Paul Bernardo. It was discovered that Bernardo owned a copy of the book and had "read it as his 'bible'."

Bernardo committed the serial rapes and murders that were characterized as "The Scarborough Rapist" and "The Schoolgirl Killer" (see here). Magnotta, then named Eric Clinton Newman, was born in Scarborough, Ontario. A few news stories emerged in 2007 claiming that Magnotta was in a relationship with Karla Homolka, the high-profile Canadian murderer, partner-in-crime and wife of Bernardo. But Magnotta denied in a "creepy" interview with reporter Joe Warmington of Toronto Sun that he had ever even met her. During the 2012 "cannibal" murder investigation, Montreal police initially announced that the pair had dated, but subsequently retracted the statement and acknowledged that they had no new evidence to corroborate the claim. (Suggested update by aferrismoon.) 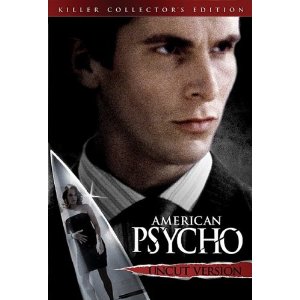 American Psycho is told in the first person by Patrick Bateman, a serial killer and Manhattan businessman, who commits bloody, violent dismemberments. The book's graphic violence and sexual content generated a great deal of controversy before and after publication. A film adaptation starring Christian Bale was released in 2000 and attained a cult following. Indeed, the "Uncut Version" of American Psycho is called the "Killer Collector's Edition."

One of the followers apparently was the 29-year-old Magnotta. 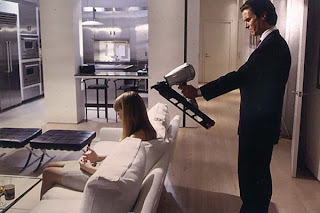 Patrick Bateman: Did you know that Ted Bundy's first dog,
a collie, was named Lassie? [laughs]
Jean: Who's Ted Bundy?

Magnotta's murder and the partial eating of his victim included clues to his movie inspirations, for he uses music from the movie to go with his footage.

AFP reporter Michael Thurston summarized what the police have discovered after analyzing the Magnotta-filmed "snuff footage":


The music playing in the background of the horrific Montreal murder video -- easily viewable online as recently as this week -- is from the 2000 serial killer movie American Psycho.
In the film, a wealthy New York banker, played by Hollywood A-lister Christian Bale, hides his alternate psychopathic ego from co-workers and friends as he acts out gratuitous fantasies.
They climax in a notorious scene in which Bale's character uses an axe in the frenzied slaughter of a colleague, set to the Huey Lewis and the News song It's Hip to be Square.
In the video, Magnotta appears to be filming himself on the night of May 24-25 killing Lin with a pickaxe [incorrect detail by Thurston - should be ice pick - LC], to a soundtrack of New Order's True Faith, which plays over the opening credits of American Psycho.
One of the videos of Magnotta which has surfaced since the slaying became public is entitled Luka Magnotta Official Theme Song, and is set the tune of True Faith. 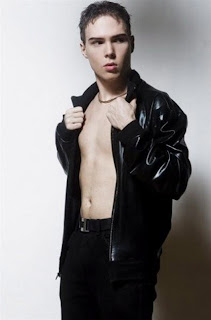 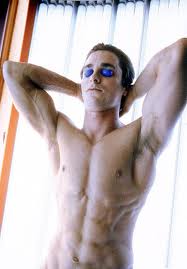 Magnotta may have even tried to appear as close to the looks of Christian Bale, as he could. 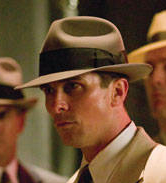 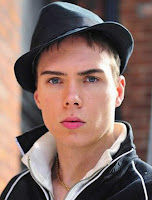 Like the ice pick murder at the beginning of Basic Instinct, after sexual intercourse, the method appears to match the scenario as it unfolds, shown in Magnotta's video, regarding how the Montreal victim was killed.

Police recently were investigating a literal link that Magnotta may have purposely left tying himself directly to Hollywood. In January 2012, the head, hands and feet of 66-year-old Hervey Medellin -- dismembered like the Chinese student -- were found in the Hollywood Hills, on a hiking trail leading up to the iconic Hollywood sign. Police "know that Magnotta was on the US West Coast" around the time of the killing and earlier in the week were looking to see if there is a link. 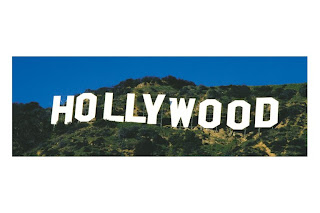 Los Angeles police released statements about Hervey Medellin, 66, the Hollywood sign victim, being, like Magnotta, openly gay (as if that even means anything, forensically). Medellin's head was discovered in Bronson Canyon Park on January 17, when a dog found a plastic bag that contained the head near the sign. The accompanying dog walker called the police, and investigators discovered severed hands and feet during the course of a two-day search.

But now, the LAPD say there is no link between Magnotta and Medellin's killing. Instead, an unsolved 2009 Miami murder case, involving Omar Laparra, 21, whose body was found in the Biscayne Bay, dismembered and floating in plastic bags, is being examined for a Magnotta link. The disposition of the victim mirrors that on the television program, Dexter, also set in Miami. 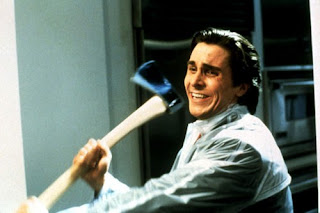 There is an idea of a Patrick Bateman; some kind of abstraction. But there is no real me: only an entity, something illusory. And though I can hide my cold gaze, and you can shake my hand and feel flesh gripping yours and maybe you can even sense our lifestyles are probably comparable... I simply am not there. ~ Patrick Bateman, American Psycho

Patrick Bateman: Wasn't Rothschild originally handling the Fisher account? How did you get it?
Paul Allen: Well, Halberstram, I could tell you... but then I'd have to kill ya.

Posted by Loren Coleman at 8:56 PM

Bernardo was the husband of Karla Homolka whom Magnotta has been linked with [ accurately or not].

Let us recall that the Zodiac Killer assuredly watched Charlie Chan at Treasure Island for his 'insipration'.

The murder weapon was reportedly an ice-pick, not a pick-ax. And the cannibalism is unconfirmed, as far as I know. Magnotta is supposed to have fed flesh to his dog.

Scarborough must be Canada's serial-killer capital! It was not only hometown to Magnotta and Bernardo but also military pilot and serial-killer Colonel Russel Williams. Anonymous police sources even state that Bernardo and Russel became 'pals' in Scarborough while they were both getting their economic degrees there in the mid-1980s.

Consider Patrick Bateman was
probably also getting an economic degree during that same time, it is worth noting that the movie version of America Psycho (directed by Canadian-born feminist Mary Harood) makes explicit that the monetary greed and shallowness of that era were fertile ground for misogyny and sociopathy.

[The website www.mittromneyispatrickbateman.com strongly suggests that we are still reaping the foul crop.]

Paul Bernardo and Karla Homolka also changed their last names in homage to a fictional serial killer when they adopted the surname "Teale" in phonetic tribute to Kevin Bacon's role of serial killer "Martin Thiel" in the 1988 film Criminal Law.

Synchromystically enough another Thiel caught my attention recently: uber-libertarian Peter Thiel, who after donating a few million dollars to Ron Paul's campaign appeared on the steering committee for the last week's Bilderberg meeting.

Conspiracy maven Webster Tarpley has been using Peter Theil as a talking-point to show the fallacy of Ron Paul worship. He also believes Theil represents a generation of predatory free-market "young wolves" who are replacing the old global elite of Rockerfellers, Kissingers and Brzezinskis.

The repeated use of "young wolves" in Tarpley's interviews caught my attention because both Magnotta and recent face-eater Rudy Eugene have first names meaning 'wolf' [Luka=Lupus (greek); Rudolf = wulf (german)]

The mass media meme last week was 'cannibal-zombie apocalypse' but the a closer reading shows the economic wolves are the ones baring their teeth.

The arts, whether Homeric poetry or latest 3D gory shocker, have always used blood and tears, horror and laughter, as potent lures and devices for emotional catharsis.

That the films inspire failed, self-marginalized individuals -- i.e. persons who lack neurotypical functioning in the areas of personality development and moral integration -- are, however, much more visceral, educational (if one wishes to use that word herein, but 'instructional' is a good word as well), and because one can review them without end, create self-delineating 'meme loops' wherein the brain is conditioned in the same manner, in the same ways, over and over.

When this involves psycho-deviancy as demonstrated in all of the above "hero worship" cases (again, "anti-hero" is a better word choice), the effect is akin to the Ludivico Treatment in "A Clockwork Orange" in reverse: one seeks to stim only the brain areas that have been conditioned to respond, as -- like the dogs in Pavlov's experiment -- the brain seeks pleasure from wherever it can obtain it, provided the effort to do so is repeatable and without much effort (at first, that is, until the addiction sets in).

I believe, in short, murder is a form of mental addiction, and that murderers clearly use violent movies and violent pornography to 'train and condition' themselves for their later acting-out.

When one can presumably by-pass and go 'direct neural jacking' (i.e. into the brain without the eyes, but via electrical) as we are doubtless headed, one wonders: what is the difference between copycats and live-alikes?

Increasingly, the lines between copies and live-alikes is so thin, so blurred, one wonders...

A great posting, thanks!