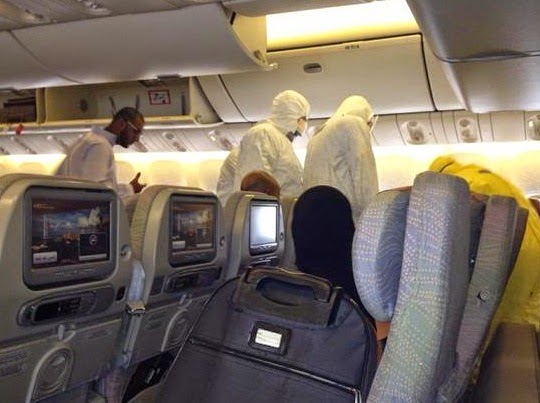 On Monday, October 13, 2015, at about 2:45 p.m, a Hazmat team boarded Emirates Flight 237 to tend to five sick passengers, all from Dubai. At least one individual was placed in a "protective suit" and removed from the plane.

The ill people had not traveled to West Africa, but recently to Mecca, before coming to the USA. The incident occurred at Boston's Logan Airport. Everyone on the East Coast usually just refers to the airport as "Logan."

The U.S. Centers for Disease Control and Prevention said there was no Ebola scare at Boston's Logan Airport on Monday after concerns were raised when five passengers with flu-like symptoms were removed from a flight that landed there.

"There was not an Ebola scare at Boston's Logan Airport," Shelly Diaz, a CDC spokeswoman, said.

Emergency crews in protective gear removed the passengers from Emirates flight 237 after it had arrived from Dubai on Monday. 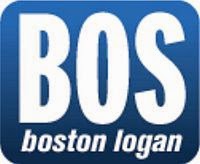 Why is this day unlike any other day?

As Nick DeLuca at BostInno pointed out, "According to an eerie TIME magazine article, the Ebola virus was first observed by the human eye on this day 38-years ago."

TIME began their article, "On Oct. 13, 1976, exactly 38 years ago Monday, Frederick A. Murphy, a CDC virologist and expert in photographing viruses peered into a microscope and saw what he describes today as a “dark beauty — [a] horror.”

Wikipedia says, "Reports conflict about who initially coined the name: either Karl Johnson of the American CDC team or Belgian researchers."

Peter Piot, at the Institute of Tropical Medicine, Antwerp in 1976.

Michael Hoffman, "a longtime student of Twilight Language," recently wrote about the naming of the "Ebola virus":

The following is taken from an October 4 (2014) interview with the Flemish virologist Prof. Peter Piot, said to be the "discoverer," in 1976, of the "Ebola" virus. He is currently the director of the London School of Tropical Medicine.
In an interview with England’s Observer newspaper, Piot states that victims of the pathogen were first infected in "Yambuku and the area around it," in what had been the old Belgian Congo. (In 1976 it was called Zaire; today it is again named Congo).
He gives the following account of how the virus was named:
Observer newspaper: You were also the one who gave the virus its name. Why Ebola?
Peter Piot: "On that day our team sat together late into the night – we had also had a couple of drinks – discussing the question. We definitely didn't want to name the new pathogen 'Yambuku virus,' because that would have stigmatized the place forever. There was a map hanging on the wall and our American team leader suggested looking for the nearest river and giving the virus its name. It was the Ebola river. So by around three or four in the morning we had found a name. But the map was small and inexact. We only learned later that the nearest river was actually a different one. But Ebola is a nice name, isn't it?"
Piot and an anonymous "American team leader" supposedly named the virus after "the nearest river," Ebola, which, as it turns out, was not the nearest river. This river-naming explanation is repeated by the Establishment media without question.

....Piot's enigmatic statement that "Ebola is a nice name" is bizarre; almost a hint pointing to a clue. [For more on what this may be about, please read here.]

The French surname Piot is derived from a personal or physical characteristic of the initial bearer, from "pion" indicating "a pedestrian, that is, one who walks on foot."

On July 16, 2014, I wrote "Hot Name Game of 2014: Logan." A mass killing, which occurred on July 14th, had the "coincidental" detail that one of the victims was a researcher of mass shootings. The place name where this event happened caught my synchromystic attention, for it was Logan, Utah. The multiple murders and suicide focussed my attention on the name Logan.

The incidents of the name "Logan" being spotted in violence situations this year have been intriguing.

On Friday, January 17, 2014, two students were wounded at 3:20 pm, during a shooting inside the Delaware Valley Charter High School, Logan, Pennsylvania. An 18-year-old female student was shot in the arm. The same bullet then entered a 17-year-old Tyler Lewis's shoulder.

On July 9, 2014, Ronald Haskell shot and killed six members of the Morman family of Stays in Spring, Texas. Haskell had previously lived and had domestic violence situations occur between himself and his then-wife (Melannie Kaye Lyon) in Logan, Utah (a Mormon community). Haskell lived in Logan, Utah, from July 2006 to November 2013, mostly with his then-wife.

In Chicago, Illinois, a driver struck a pedestrian walking in the Logan Square neighborhood, on July 16, 2014. 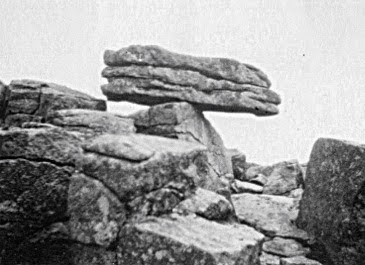 I pinpointed Logan as a "power name" in my 1983 (updated in 2007) book, Mysterious America: The Ultimate Guide to the Nation's Weirdest Wonders, Strangest Spots, and Creepiest Creatures:

"Logan" is another one of those words. Rocking logan stones are a part of ancient megalithic research. My brother [Jerry Dale] and I interviewed the Lowe family about the big birds' attempted abduction of Marlon from their front yard, in Logan County, Illinois. Another Logan County, this one in Colorado, has had an unusually high number of cattle mutilations and one 1975 mystery helicopter report. Logan County, Colorado, also has had an 1897 airship account, as has Logan, Ohio. Loganville, Wisconsin, sits but a stone's throw from the woods around Baraboo, said to be haunted by ghost elephants. A lake monster supposedly made an 1835 appearance in Logansport, Indiana. Logan Peak, near Huntsville, Alabama, the location of UFO, Bigfoot and mystery explosion reports, is a short distance north of Hobbs [="devil's"] Island. Logan, Kansas, saw some unexplained bird deaths in 1978. Logan, Utah was frequented by UFOs during the late 1940s and early 1950s. A May 1, 1954, flash of light was followed by an explosion and huge crater in Logan, Utah. In the 1980s, women were disappearing from Boston's Logan Airport and thus ending this list unended.


No surprises that Ebola and Logan have overlapped in 2014 on this special anniversary date. What's next?
Posted by Loren Coleman at 9:26 PM