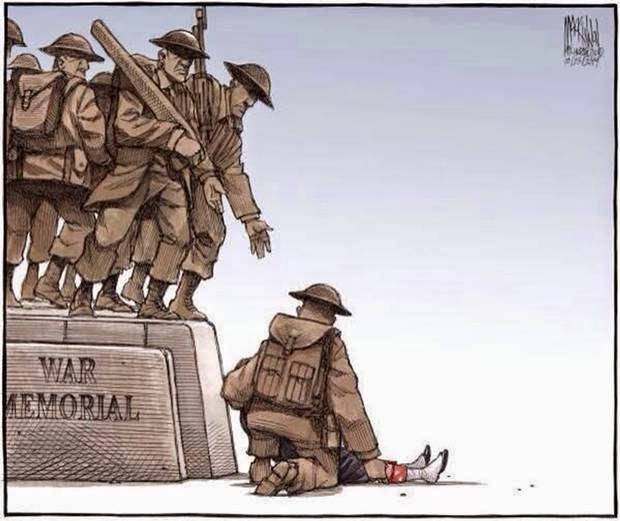 The day after...Halifax's The Chronicle Herald image by cartoonist Bruce MacKinnon is being called the "perfect tribute." 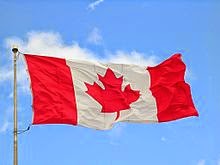 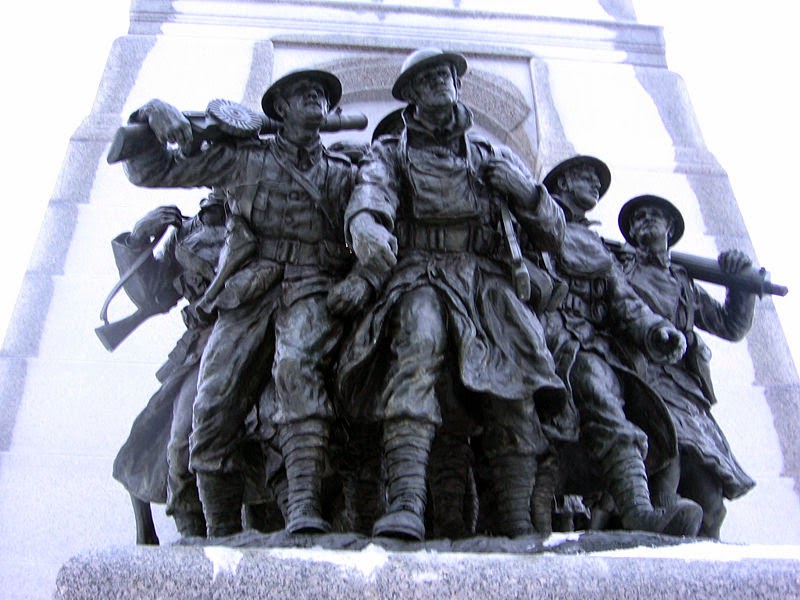 At least one person was shot this morning at a war memorial near Canada's Parliament in Ottawa.

The Canadian Broadcasting Corporation reported that a soldier was shot. Others have seen a body inside Parliament. 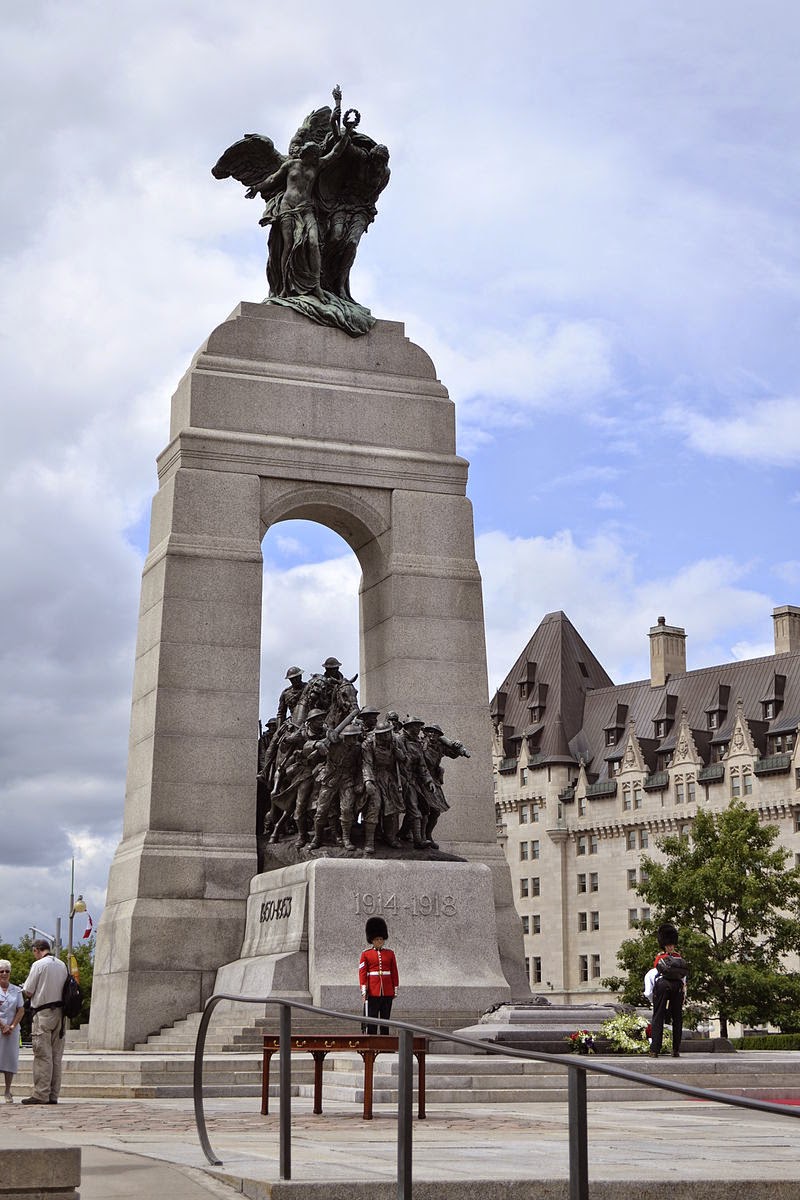 The active shooters ran towards Parliament Hill, got into the main entrance to the Canadian Parliament, fired dozens of shoots, and then moved through the hallway. Parliament went on lockdown, officials reported.

Various accounts discussed different parts of a confusing whole. The Red Dirt Report mentioned that there was a sighting of a "man with long black hair, his face covered by a white scarf with decals on it and wearing a black jacket."

A member of Parliament, Bob Zimmer tweeted that the "lone gunman is deceased."

The suspect has reportedly been identified as Canadian-born Michael Zehaf-Bibeau, was was killed in a Center Block shootout.

(But there are other early reports there may be other shooters - two or three. And that they may be on the Parliament's roof. All seem to be incorrect.) 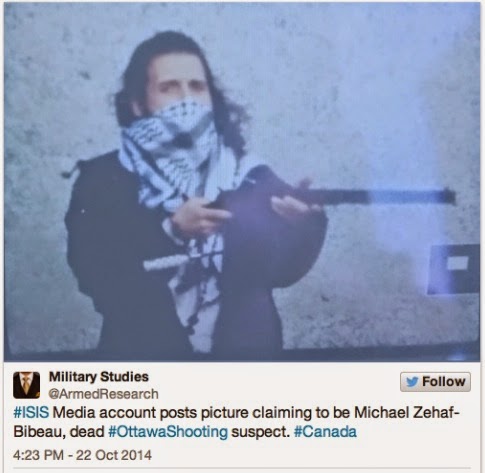 Michael Abdul Zehaf-Bibeau has been identified as the shooting suspect at Parliament Hill in Ottawa, Canada on Wednesday. Zehaf-Bibeau is a Canadian native born in 1982.

"Zehaf" is Algerian, so some are speculating he is Algerian. Bibeau (Bibaud, Bibaut) is a French nickname for a heavy drinker, from a derivative of Latin bibere, "to drink."

The soldier who died is said to have been a member of The Argylls of Canada - 91st Canadian Highlanders. 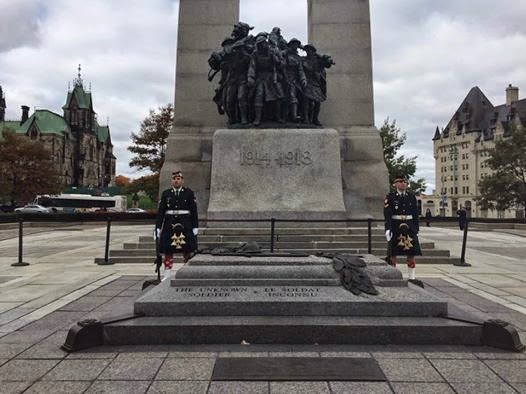 In a photo from this week, here is Cpl Cirillo (left), and Cpl Stevenson on Guard at The National War Memorial in Ottawa. Both are members of The Argylls of Canada. 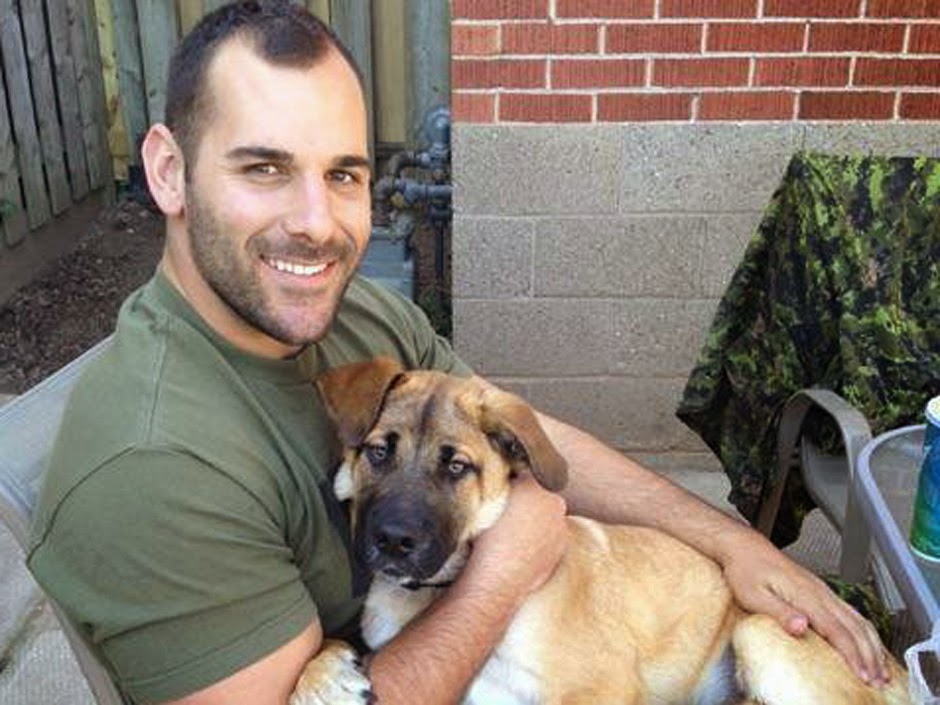 The soldier has been identified as Cpl. Nathan Cirillo, a reservist based out of Hamilton, Ontario.

The Canadian contribution to the bombing of ISIS or IS have been codenamed Operation Impact by the Canadian Department of National Defence. Canadian fighter jets left for the Middle East to join in airstrikes on October 21, 2014.

October 22 is the anniversary from 1964, when a Canadian Multi-Party Parliamentary Committee selected the design which becomes the new official flag of Canada. (h/t RS) 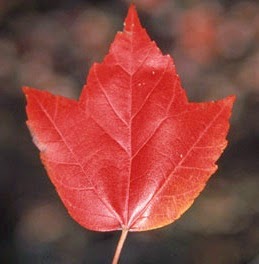 The three-lobed Canadian maple leaf is often compared to a trident. (h/t RPJ) 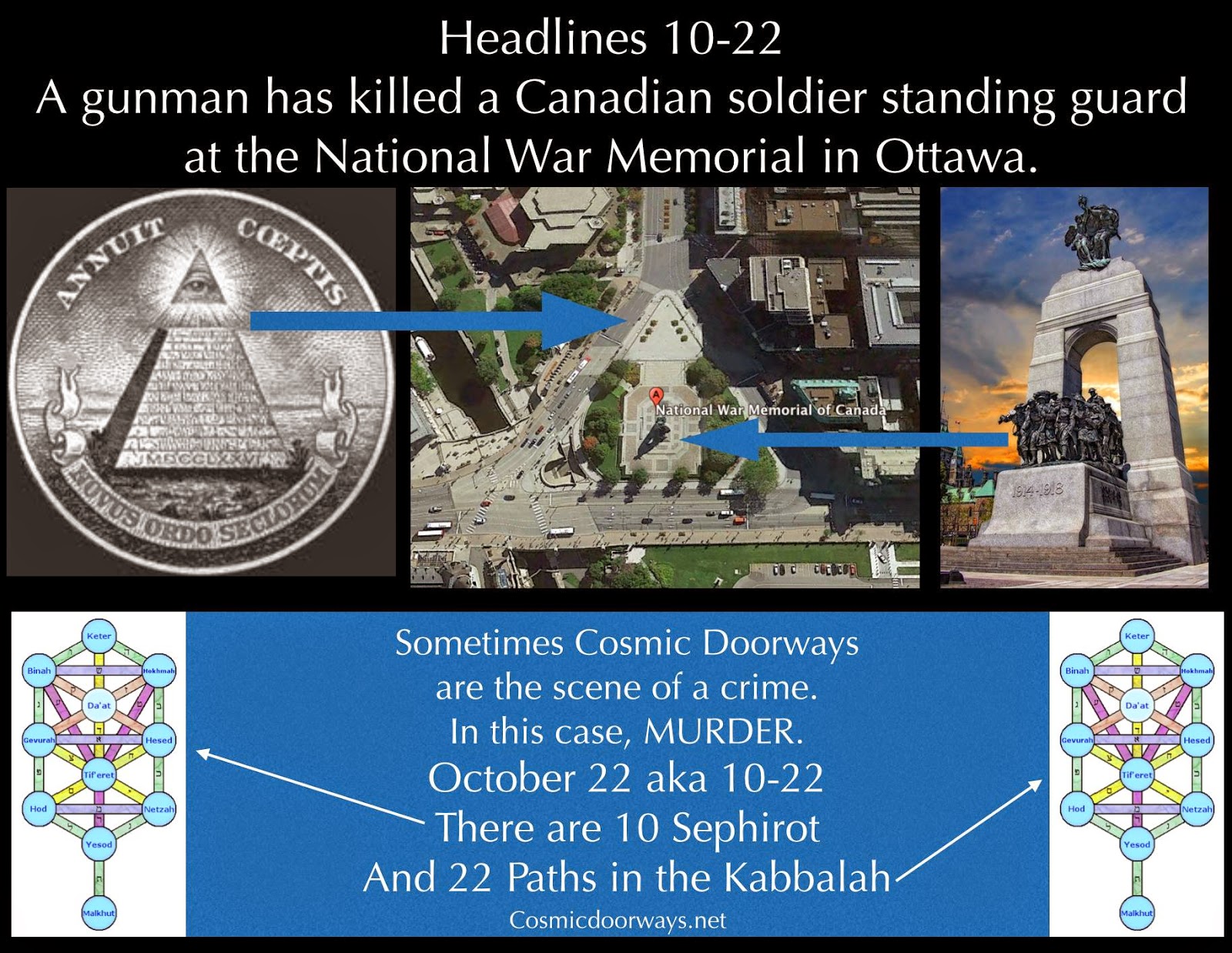 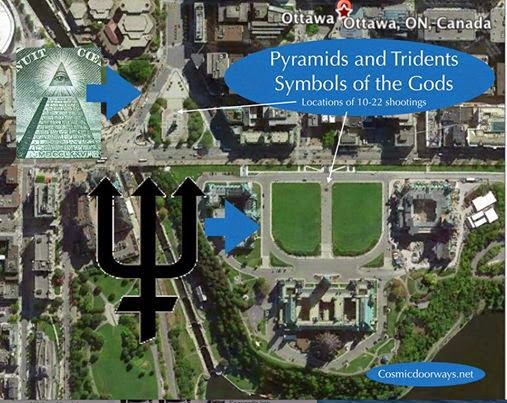 I think this is per Mark Gray.

There were two soldiers standing guard at the war memorial in Ottawa near Parliament, and a gunman shot one of them, a witness told CNN on Wednesday. Peter Henderson, a journalist, said other soldiers doing drills nearby ran to help the fallen soldier. Henderson said he knew the person shot was a soldier because of the ceremonial uniform the soldier was wearing.

There were "several shooting incidents in downtown Ottawa" on Wednesday morning, police said on Twitter. "Incidents occurred at National War Memorial, near the Rideau Centre and Parliament Hill." All Ottawa police buildings remain on lockdown and are closed to the public, police also said on Twitter.

There were "numerous gunmen" Wednesday morning at the Canada War Memorial shooting, said Marc Soucy of the Ottawa Police Service. Authorities are working to figure out if there were two or three gunmen, he said. Only one person was shot, Soucy said. Source.

There are reports that one soldier was killed at the War Memorial. One gunman was also killed, apparently, inside Parliament.

Officials are saying that the reports of an incident near the Rideau Center (mall) has nothing to do with the shootings at the War Memorial and Parliament.

+++
Today's events follows an incident on Monday, October 20, 2014, when 25-year-old Martin Couture-Rouleau ran over two soldiers. Couture-Rouleau was briefly detained at a Canadian airport in July 2013 when he sought to fly to Turkey. Police did not have enough evidence to charge him with seeking to join a terrorist group abroad and released him. 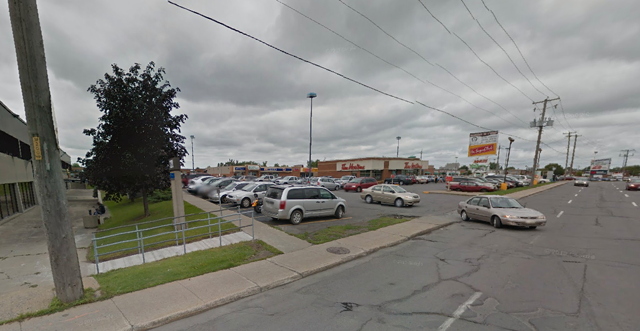 Couture-Rouleau was fatally shot by police after he struck the two soldiers with his car in a Quebec supermarket parking lot (shown above) -- a scenario which had been depicted only last month in IS propaganda. Police said Rouleau raced through a mall parking lot in Saint-Jean-sur-Richelieu about 11:30 a.m. Monday. He called 911 as this unfolded and told the operator that he was acting in the name of Allah.

The parking lot of the Tim Horton's where the solider was run down.

Late on Tuesday, Canada raised its national "terrorism" alert, officials said, after a soldier run over by a suspected jihadist died in hospital. That soldier's name is Patrice Vincent.

The Canada case appears to be a copycat of the murder of British soldier Lee Rigby in London in May 2013. Rigby was run over by two Muslim converts before being stabbed and hacked to death. 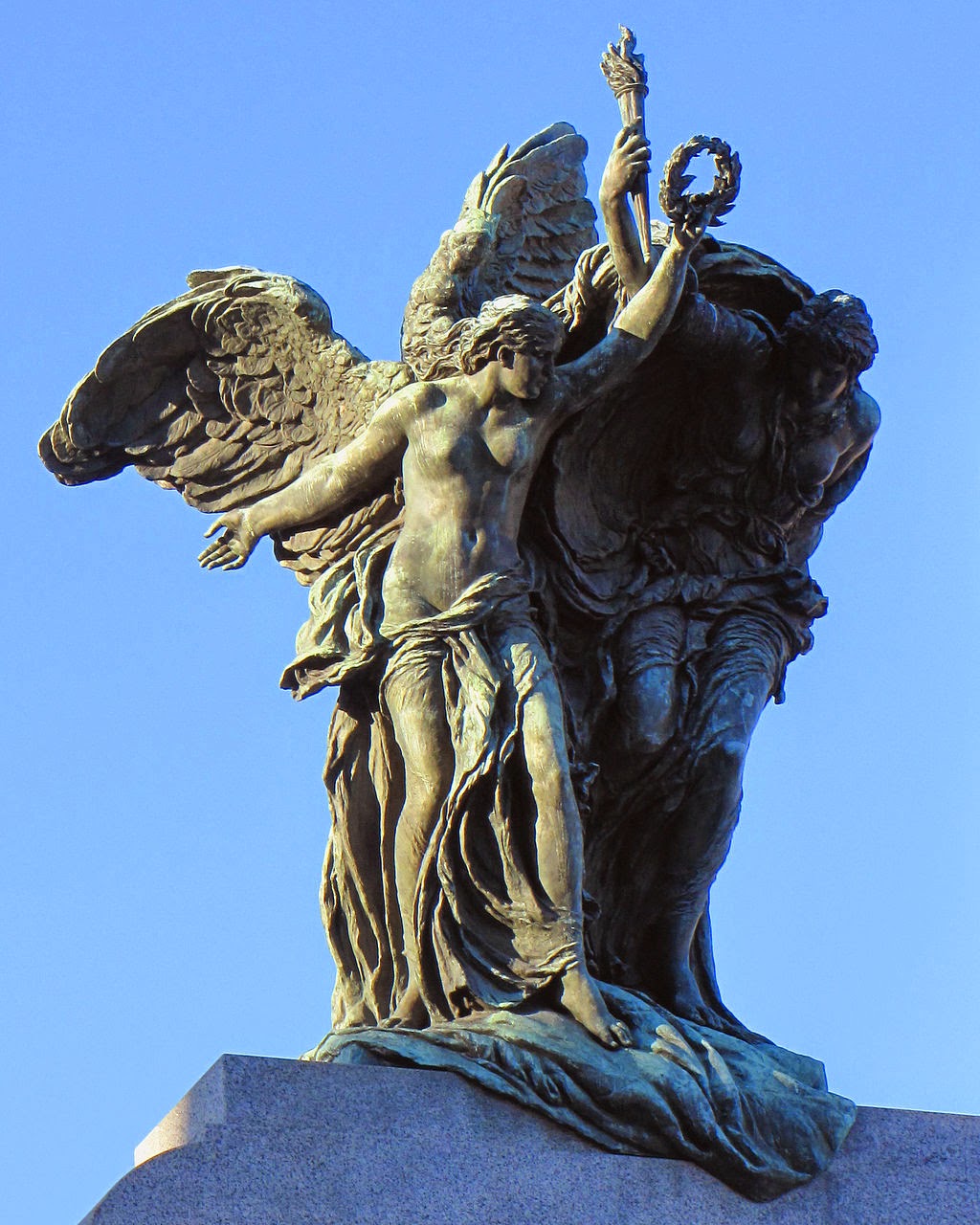 The statues at the top of the memorial symbolizes Peace and Liberty.

The National War Memorial is a cenotaph (surmounted by a bronze sculpture entitled "The Response") in stands in Confederation Square, Ottawa. A cenotaph is an "empty tomb" or a monument erected in honor of a person or group of people whose remains are elsewhere. The word derives from the Greek: κενοτάφιον = kenotaphion (kenos, one meaning being "empty," and taphos, "tomb"). 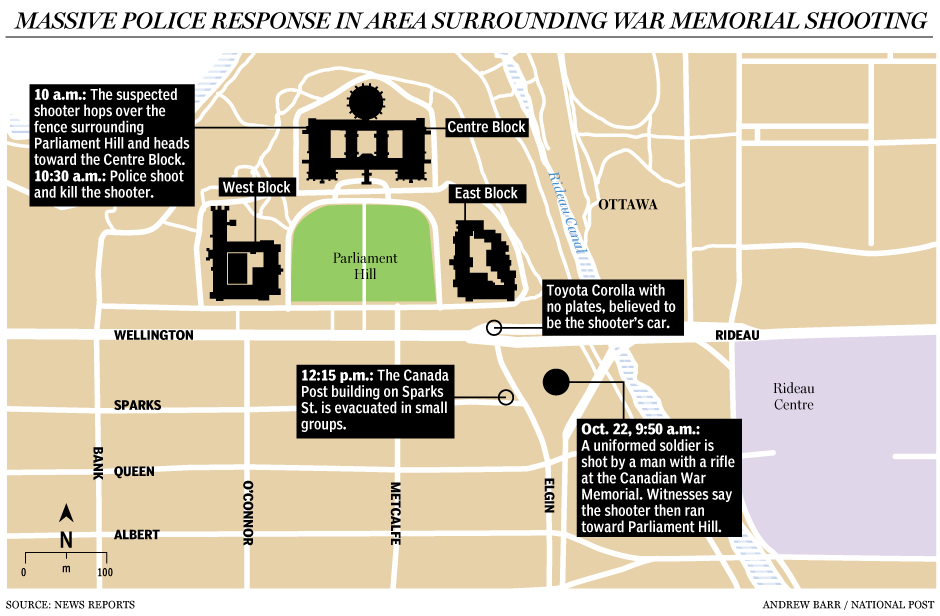 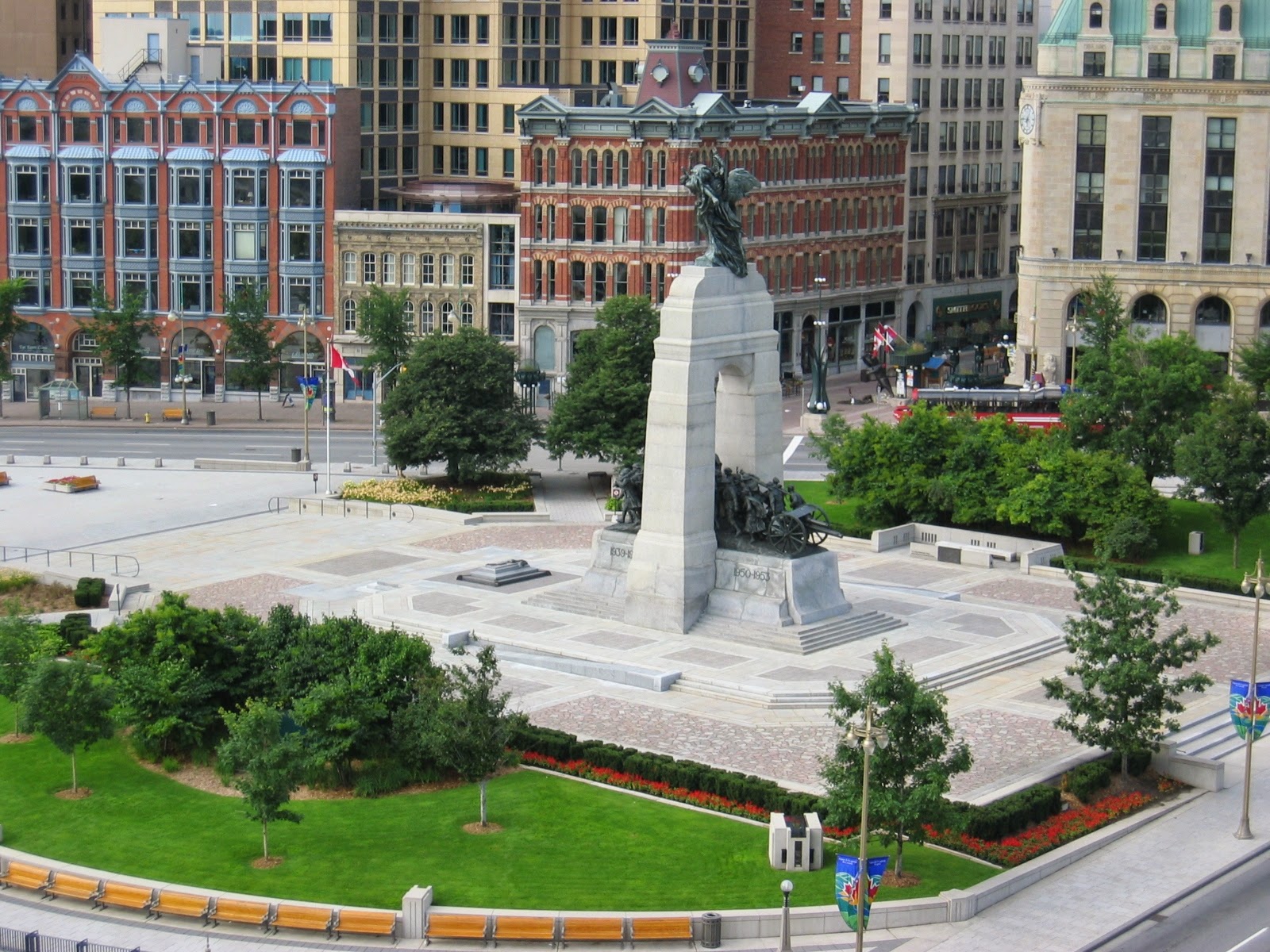 Is it a stretch to see the Maple leaf in the Canadian flag as a 'biological trident'?

It's like a fractal trident, three parts of a leaf splitting into three points. A 333.

The fact authorities believe there was more than one shooter, and that the Muslim/Islamic New Year is being recognized October. 24/25th this year, there may be more to come, sadly.

There are Police tweets on record that they saw, SAW snipers on the roof! SO there HAD to be more than one shooter. How did they get from the ground floor to the roof and then to the ground floor again?

All highly unorthodox and very suspicious. Especially considering that the units on guard duty at the Cenotaph switched back responsibilities on MONDAY from soldiers of the Royal Canadian Navy to soldiers from the Canadian Army!

What a joke... what happened to the well-dressed man on the older model black motorcycle they had been chasing... they lost at least one, maybe two other shooters... and now are covering it up.... I followed this on Ottawa police and fire scanners yesterday....