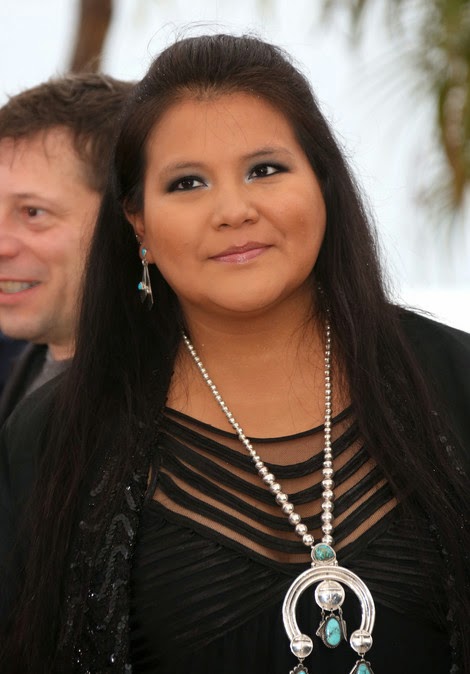 The Native American (Blackfeet) actress Misty Upham, 32, who has been missing since October 5, 2014, was discovered dead in a ravine in a Seattle woodland, close by her sister's apartment, on or near the Muckleshoot Nation, on October 17th. 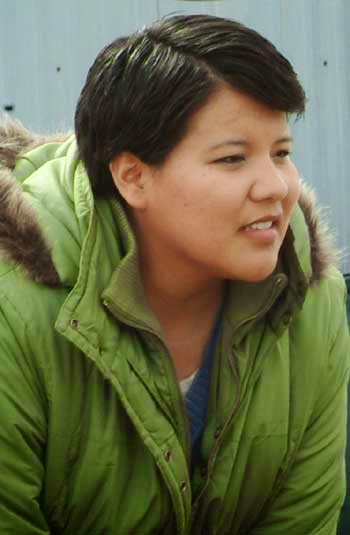 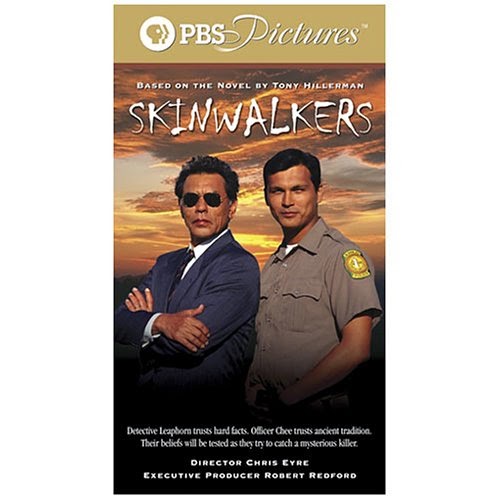 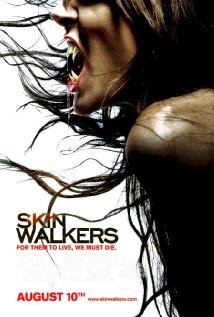 In some Native American legends, a skinwalker (in Dini/Navajo = yee naldlooshi) is a person with the supernatural ability to turn into any animal he or she desires. To be able to transform, legend sometimes requires that the skin-walker wears a pelt of the animal. In most cases, this pelt is not used in modern times because it is an obvious sign of them being skin-walkers. Similar lore can be found in cultures throughout the world and is often referred to as shapeshifting by anthropologists. I personally, as long ago as the mid-1960s, interviewed people who had encounters with what they assumed were skinwalkers, running beside their speedy cars, in Arizona and New Mexico. There is nothing funny about skinwalkers and shapeshifters to those who feel they have seen them.

The synchrocinema Skinwalkers is a 2002 mystery television film based on the novel by Tony Hillerman, one of a series of mysteries set against contemporary Navajo life in the Southwest. It stars Adam Beach as Jim Chee, Wes Studi as Joe Leaphorn, and Misty Upham as Nina. It was produced as part of the PBS Mystery! series.


Joe Leaphorn, a seasoned cop accustomed to the ways of Phoenix, Santa Fe, and Albuquerque, has returned to the Navajo Nation. Recovering from cancer, his wife, Emma, feels rejuvenated by her home's landscape and people. Leaphorn is less sure about their return. Well schooled in urban policing, he is soon confronted with a particular Navajo case: a mysterious killer who has a special antipathy for medicine men. He works with a partner Jim Chee, an FBI Academy grad who is training to be a traditional healer.
Roman George's body is found miles from his abandoned truck and surrounded by ancient symbols etched in blood. A local archeologist holds the key to the symbols he left behind, so Chee and Leaphorn pay him a visit at a nearby Anasazi ruins. There, these unlikely partners find further clues indicating that the murderer may be a "skinwalker," a Navajo witch with the power to shape shift, or change from human to animal, move with lightning speed, and to kill with curses. Fearing that his mentor, Wilson Sam, will be next, Chee convinces the medicine man to hide in a nearby motel.
As Chee juggles the day-to-day police work on the reservation, Leaphorn tracks down clues to the identity of the evasive criminal. More ancient symbols are found at an abandoned paint factory, where a local gang has been congregating. What do the signs mean? Who is sending these messages in blood? Could the murders be linked to the old Dinetah Paints scandal? Chee does not have much time to mull these questions over, as he soon finds himself in the killer's crosshairs. Source.


For a complete overview of the various theories related to Misty Upham's death, please see here. Most focus on a suicide or an accident. 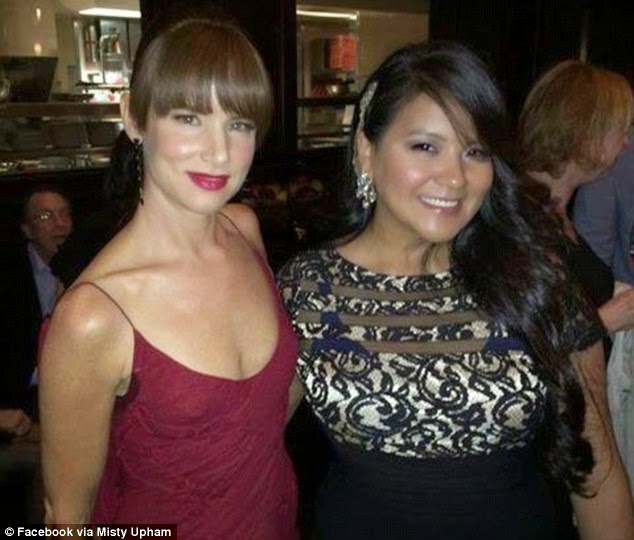 Some individuals, such as actress Juliette Lewis, feel a more sinister backstory may be in play. 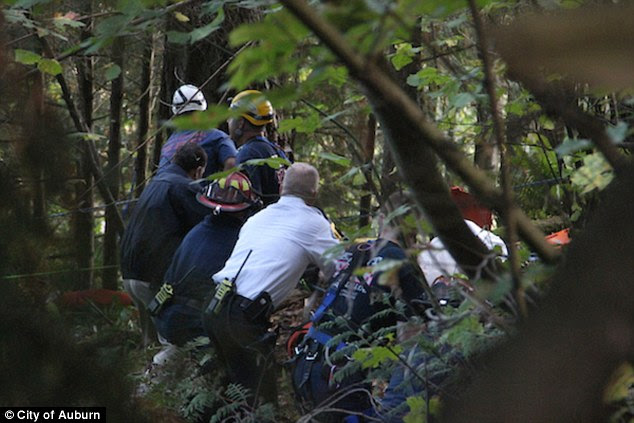 Her family claim that she tripped and fell down a hidden embankment while hiding from police. She was missing for 12 days until her body was found.

In summary, Misty Upham was apparently bipolar and suicidal, and may have taken her own life. She may have been fleeing what she felt was a police pursuit, and fallen, by accident, into the ravine. The family has some strong feelings about her death, of course.

The following is a statement from the family:


We would like to provide the following information to all of Misty's friends and family. We believe that Misty's death was accidental. She did not commit suicide.
We believe she ran into the wooded area behind her apartment to hide from the police.
The area in question has a hidden drop off and evidence suggests that she slipped and fell off of the steep embankment when she tried to get out of a view from the road.
She simply did not see the drop off. We searched near that area that evening she disappeared and missed seeing her purse by 25 feet.

I , Charles, went there after Fire Department officials recovered her body and you just can't see the steep drop until it's to late.
Misty was afraid of the Auburn PD officers with good reason. In an incident prior to her disappearance, the Auburn PD came to pick up Misty on an involuntary transport to the ER.
She was cuffed and placed in a police car. Some of the officiers began to taunt and tease her while she was in the car.
Because it was dark they couldn't see that we, her family, were outside our apartment just across the street witnessing this behavior.
They were tapping on the window making faces at her. Misty was crying and she told them you can't treat me like this I'm a movie actress and I will use my connections to expose you.
Then another officer walked up to her asked 'are you a movie star?, then why don't complain to George Clooney!'
After Misty arrived at the ER we went to see her and she has a swollen jaw, black eye and scratches and bruises on her shoulder.
I asked the ER staff what happened and they said Misty was brought in like that. Misty said she couldn't remember what happened but that’s why she feared the police.
I asked Misty to call the Auburn PD and ask to speak to the commander. When she was connected to, whom we believe was Commander Stocker she made a verbal complaint.
The official asked her 'what are you going to do about it?' She replied I'm doing it, I'm telling you so you do something about it.'
The APD official told her unless she wanted to file a formal complaint the matter would not be pursued.
The day the APD was called to do another Involuntary transport Misty left the apartment where she was staying.
When we tried to follow her Auburn PD officers told us they wanted to check for inside. We told them that Misty may have walked around the side of the apartment but they made us to go back inside.
They asked if we were hiding her and took time to search the apartment and get a description of what she was wearing.
By the time they finished Misty was gone. We believe that if we were not otherwise occupied we may have found Misty before she got hurt.
It is a tragic that Misty slipped and fell to her death trying avoid the police, it's tragic that she did not get the proper medication to treat her mental illness from her mental health care givers at Valley Cities Mental Health, it is tragic that the Auburn PD refused to help offer to find or at least change her Missing status to 'Endangered' to allow other agencies to get involved. But the real tragedy is this could have been prevented on a lot of levels.
We pleaded with the Auburn Police to help us find Misty but Commander Stocker made the decision that Misty did not fit the criteria of the Washington State Endangered Missing Persons Plan. This became a point of contention between us and the Auburn PD.
In a statement he gave to the press he said Auburn PD doesn't have any evidence that Misty is actually missing. He went to say that Misty packed her belonging and left her apartment. This was an inaccurate statement.
We believe that Commander Stocker had animosity against Misty due to a previous encounter. Why else would he refuse to allow common sense to prevail? Imagine a 32 year old woman with mental illness, without her medication, imagine she left in an unstable mental state, imagine for the first time in 32 years she lost contact with everyone for 11 days.
Now imagine she is Commander Stocker's daughter. Do you think this case would have been handled differently? Misty loved life, she had ambition, vision and a desire to make a difference in the world she lived in.
She tried to use her celebrity status to influence positive change and she became a living example of that endeavor. Now press reports are saying that Auburn police department found Misty.
The truth is the Native American community formed a search party and found her after several days of searching without the help of the Auburn PD.
We would like to thank the Muckleshoot Tribe and other Tribal volunteers for all their support in our time of desperation.
We would like thank all the wonderful supporters who could not be here but offered kind words and prayers. 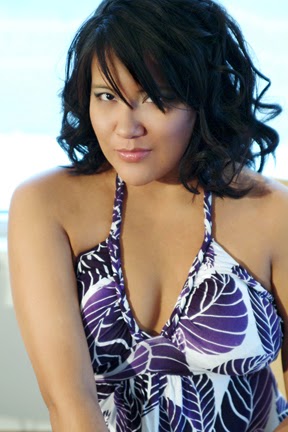 Posted by Loren Coleman at 8:59 AM