The Pied Piper of Hamelin 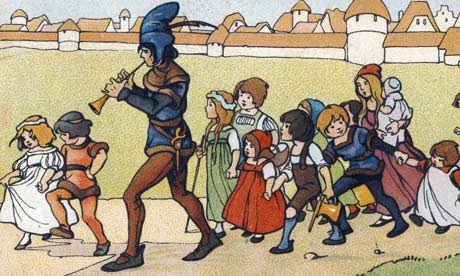 The new multicolored clothing on the stranger made people feel slightly uneasy. The man’s name, Bunting, was a reflection of his attire, the residents of the small Westphalian town were soon to learn. The tall, thin newcomer offered his services to the town council, and they readily accepted. Pest control was a serious problem in 1284 and this fellow Bunting said he could get rid of all the rats in town. Thus the beginning of the legend of the Pied Piper of Hamelin was born. Bunting did lure the rats with his mystical music into drowning in the Weser River, but the townspeople refused to pay him. The Pied Piper decided to collect in another fashion. On St. John’s Day, June 24th, Bunting returned to Hamelin and piped his haunting tune. Soon all one hundred and thirty children were enchanted into following him out of the town and into a cave in the Koppenberg Mountain. The entrance was sealed and the children were trapped forever.

The legend of the Pied Piper of Hamelin is said by some scholars to be based on truth. Others feel the story grew out of the Children’s Crusade of 1212 in which 20,000 young crusaders marched towards the East and were never seen again. Whatever its origin, the tale is a well known one, having been retold in many ways at various times. Robert Browning’s poem, for example, was written in the 1800s, and places the events of the Piper’s last visit to Hamelin on July 22, 1376. The town of Hamelin does exist, and perhaps the sinister character and deeds of Bunting did as well.

The above passage is from my book, Mysterious America, in my "Phantom Clowns" chapter because "Pied Pipers" continue to visit themselves upon the children in the USA and elsewhere.