On this date, June 11, in 1964, a World War II veteran Walter Seifert runs amok in an elementary school in Cologne, Germany, killing eight children and two teachers and seriously injuring several more with a home-made flamethrower and a lance.

On June 11, 1964, shortly after 9 o'clock, Seifert approached the schoolyard of the Catholic elementary school located at Volkhovener Weg 209-211, armed with a self-made flamethrower, a lance and a mace. The school consisted of one main building and four wooden barracks, each housing two classes with a total of eight teachers and 380 students.

As Seifert entered the school compound through the smaller of two gates he was observed by three crossing guards who mistook him for a mechanic trying to repair the gate's broken lock and asked him what he was doing there. Seifert ignored them and, after blocking off the gate with a wooden wedge, proceeded towards teacher Anna Langohr who was teaching a group of girls in sports at the schoolyard. When Langohr, who knew Seifert, asked him, if he could help them, he ignited his flamethrower and attacked her and the girls.

Seifert then went to one of the barracks, smashed in the windows with the mace, and aimed his weapon at the children in the classrooms, setting them on fire. He continued to attack the people running and jumping out of the burning building until his flamethrower ran out of fuel, whereupon he threw it away. When teacher Gertrud Bollenrath stepped out on the schoolyard Seifert fatally stabbed her in the chest with his lance and then approached the barrack where Ursula Kuhr and Mrs. Kunz were teaching. The two women tried to keep the doors shut, but Seifert managed to tear one of them open, making Mrs. Kuhr lose her balance. After she fell down the flight of stairs and landed on the ground in front of the building Seifert stabbed her in both legs and once between her shoulders.

Seifert then fled the school compound and swallowed E605, a poisonous insecticide, in hopes of committing suicide, but as the substance was diluted he did not die immediately. Chased by 20 to 30 people he ran towards a railroad embankment where he tried to fend off his pursuers with his lance. When police arrived at the scene at 9:38 a.m. he tried to stab one of the officers, but was eventually brought down with a shot in his leg. He was arrested and brought to the University Hospital in Lindenthal where he was questioned several times, before he died at 20:35 CET.

The attack had lasted for about 15 minutes. Ursula Kuhr died at the scene, while Gertrud Bollenrath succumbed to her wounds in hospital at 1pm the same day. Along with teachers Anna Langohr and Wiltrud Schweden twenty-eight students were brought to hospitals, some of them with burns to 90 percent of their body. Eight of the students succumbed to their wounds in the following weeks. Source. 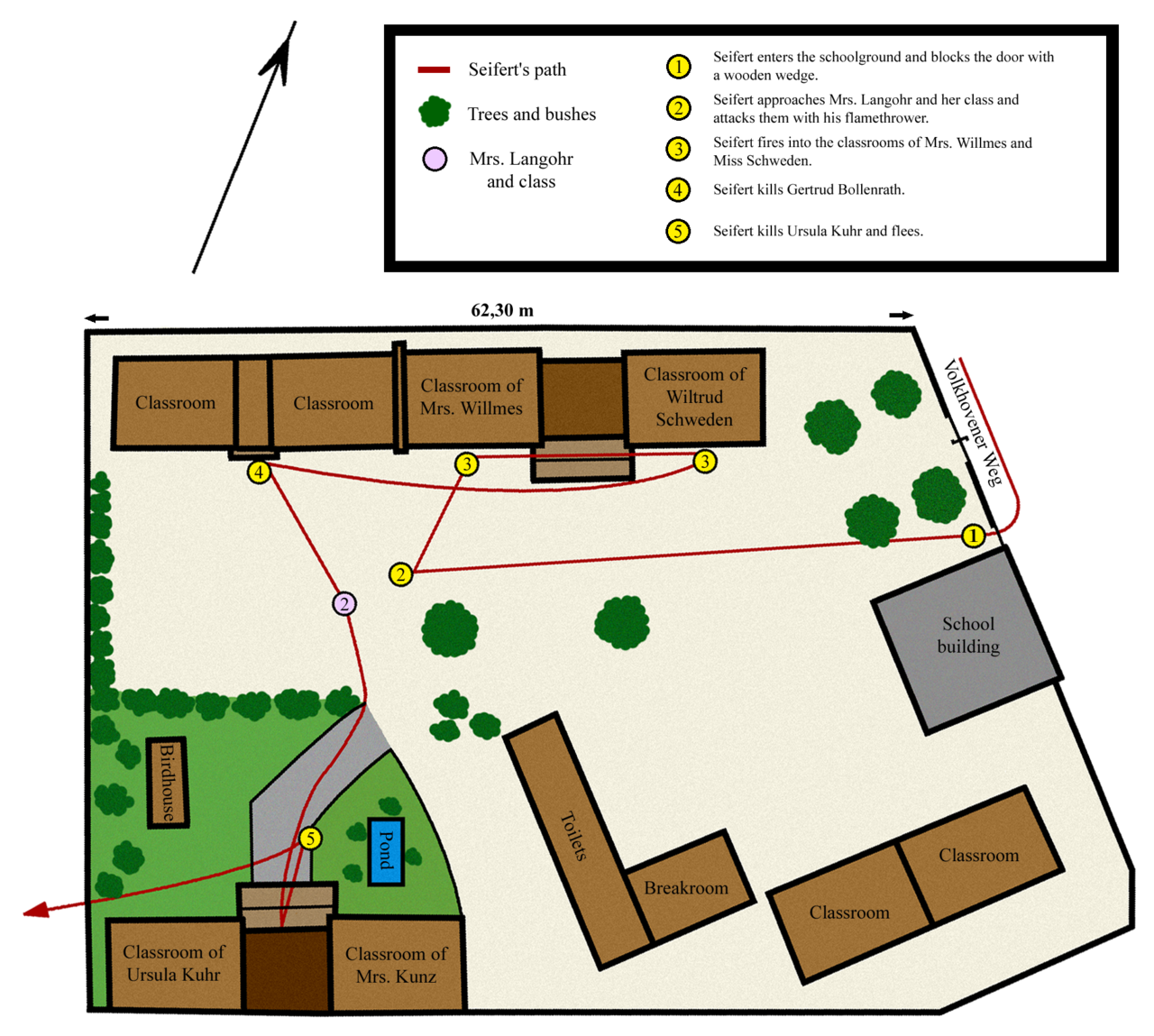 Posted by Loren Coleman at 6:31 PM