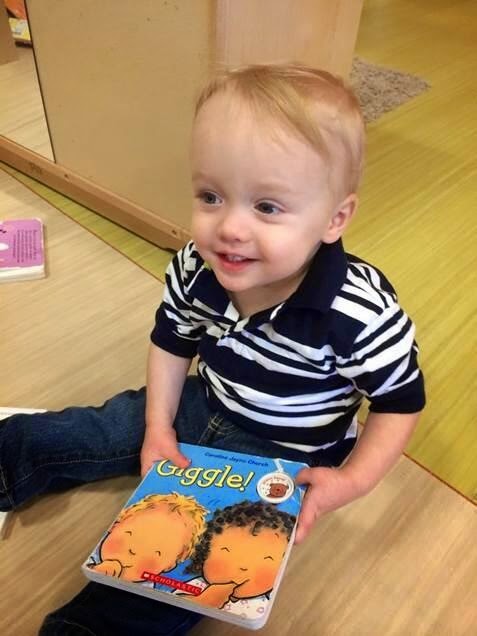 Some sad, weird stories are crossing my desk, about kids, about deaths, about this time of year, and, of course, once again, from the Atlanta area. Maybe there's someone out there who can see some patterns or meaning in all of this horrible news.

First, something seemed to be in the wind about the Summer Solstice, more so than normal, this year. There was a rash of stories, seemingly causing some Satanic smoldering about the dates June 20-25. See  "Satanists & Solstice Slayings." Of course, there was a hint of bizarreness just before the 21st on "Friday the 13th at Waffle House." Earlier, in May, a "Man Robbed A Waffle House With A Pitchfork."

The three Waffle House incidents - the pitchfork robbery at a WH, the killing of an on-duty policeman working as a security guard at a WH, and a WH employee shooting and killing a customer - all happened at Atlanta-area Waffle Houses. 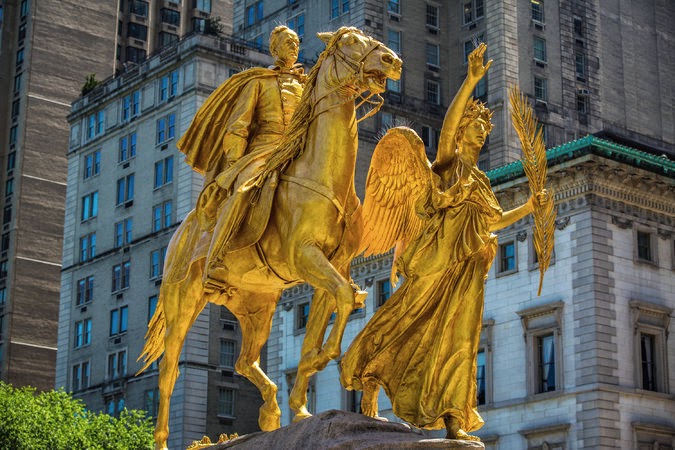 In a strange link to Atlanta and an old name game previously identified here (= Tecumseh), the William Tecumseh Sherman monument (above) at the Grand Army Plaza in New York City was in the news because it is losing its gold covering. Tecumseh also showed up in the news this week with a lightning fire in Tecumseh, Ontario; a horse being killed in a fire in Tecumseh, Oklahoma; and a shooting at the intersection of Gloster and Tecumseh streets in Pittsburgh, Pennsylvania, to name but a few examples. 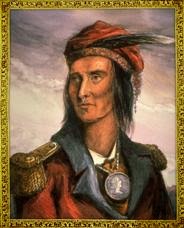 The Union general who burned Atlanta was named after the great Shawnee prophet Tecumseh.

When another human tragedy struck, late in June, it was no surprise that the Atlanta area was a focus again. A toddler had been found dead, and had apparently been left alone for hours in a hot car. The distraught father blamed himself and faced serious criminal charges.
But there is a bit of mystery here. What was the truth behind the incident?


Cobb County, Georgia, police imply there is more -- much more -- to the story.
"Much has changed about the circumstances leading up to the death of this 22-month-old [Cooper Harris, pictured at top] since it was first reported," Cobb County Police Sgt. Dana Pierce told CNN. He would not elaborate, citing an ongoing investigation, but his words made it clear this was not just another case of a young life left and lost to heat exposure in a hot car.
Shocking details in hot car death case
"I've been in law enforcement for 34 years. What I know about this case shocks my conscience as a police officer, a father and a grandfather," said Pierce.

Initially, Justin Ross Harris, 33, (pictured) told Cobb County police that he accidentally left his toddler son in his SUV on Wednesday. According to police, Harris told them he had forgotten to drop the child off at a daycare center, before going to work.
Harris initially told police he realized that he'd left the boy strapped in his car seat as he drove home Wednesday afternoon.
Investigators say patrol officers were in the area of the Akers Mill Square shopping center in the suburban Atlanta county when dispatchers received the calls from witnesses around 4:20 p.m.
"He kept saying, 'What have I done? What have I done?'" Dale Hamilton told CNN affiliate WSB-TV.
"Within moments of the first responders getting to the scene and doing their job and questions began to be asked about the moments that led up to their arrival at the scene, some of those answers were not making sense to the first responders," Pierce of Cobb County Police said.
On Thursday, Harris pleaded not guilty to felony murder and cruelty to children charges. He's being held without bond at the Cobb County Jail.
CNN spoke with the child's mother, Leanna Harris, on Friday. Harris says she's been advised not to discuss the case with the media.
"We have been in communication with the mother throughout the investigation. At this time, I'm not at liberty to discuss her involvement. That's a part of the case our detectives are working on," Pierce said....
According to the arrest warrant, the temperature reached 88 degrees in the area on Wednesday. Police said medical personnel believed the child had been in the SUV since 9 a.m., as Harris said.
But Pierce told CNN on Friday, "I cannot confirm that the child, as originally reported, was in the car at 9 a.m." ~ CNN

What's worse, there was another such death.


The [Atlanta-area] toddler's death was the second this week of a child in a hot car. On Monday, a 9-month-old girl died in Rockledge, Fla., after her father forgot to drop her off at her grandmother's house, leaving her in the back seat of his pickup truck for several hours as he worked at his job as a telephone solicitor for the Fraternal Order of Police.
As of Thursday, no charges had been filed against Steven Lillie, 31, of Cocoa, Fla. Rockledge Police say they still are investigating the death and allowing Lillie and his girlfriend, the child's mother, to grieve the loss.
"She's been in the car for hours, and I absolutely forgot about her," Lillie said during a 9-1-1 call Monday to police dispatchers. "She's not alive." USA Today. 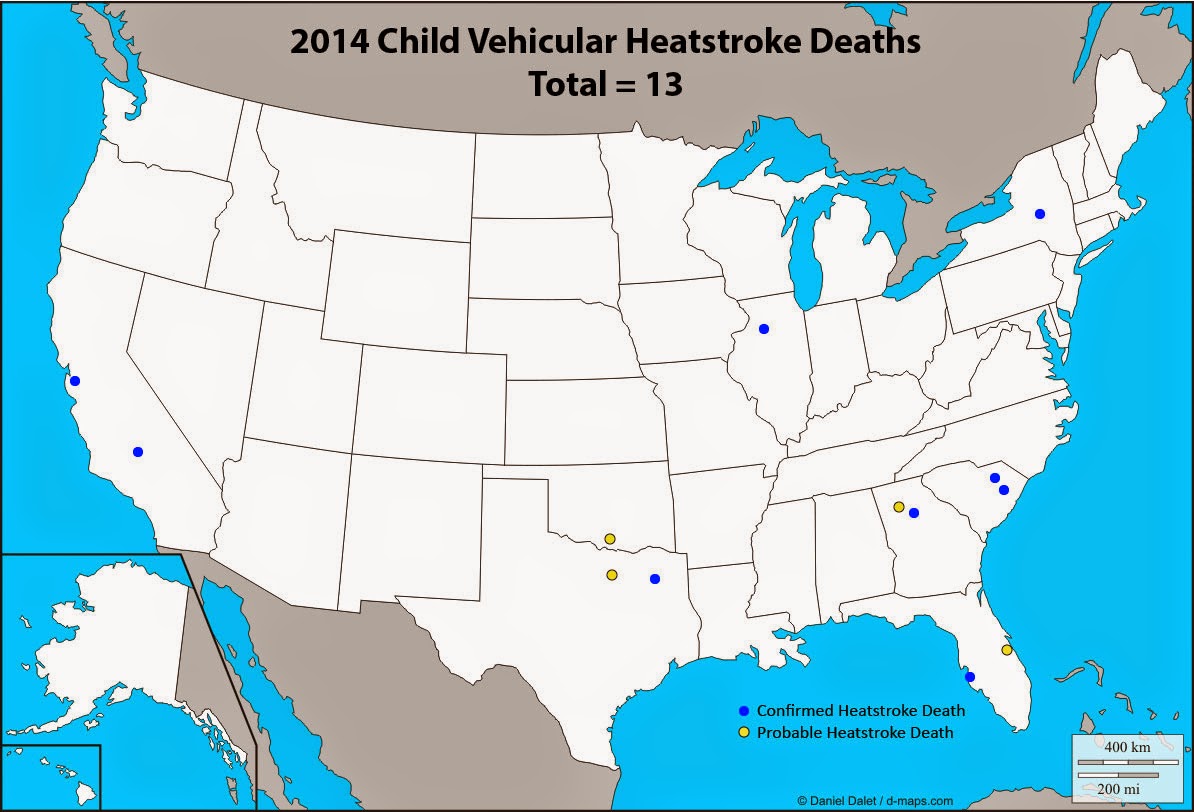 Thus far, in 2014, the following incidents have occurred:

"Suffer the little children" seemed a fitting headline for this posting.

But Jesus said, "Suffer the little children, and forbid them not, to come unto me: for of such is the kingdom of heaven." ~ Matthew 19:14, English Revised Version, The Bible

Just to clarify, as pointed out by RC in a comment to me, the use of the word "suffer" in the biblical sense means to "allow" as in "allow the children to come to me."

What is the paradox is how the meaning has changed for people from Stephen King (see at bottom) to the self-styled Satanists.

Meanwhile, the BeforeItNews folks wanted to turn everyone's attention to Denver, Colorado, over the Solstice weekend. There was talk of the sacrifice of a human child there, due to the Summer Solstice.

It was also pointed out that around the time of the Summer Solstice in 2013, in Midwest City, Oklahoma,


a toddler was held hostage [on June 17th] at Walmart, the suspected criminal claimed he was part of a Satanic cult.
News9 reported Sammie Lamont Wallace grabbed the two-year-old child at knifepoint and began speaking about the Illuminati and a satanic cult. Police said they began to research the things Wallace said, and found out that the day of the incident linked to a day of human sacrifice.
Police shot and killed Wallace after he began to make attempts on the girl's life. According to the police report they found religious writings in a notebook to validate his actions. See a report that further explains the story here.

"Suffer the Little Children" is a February 1972 short story by Stephen King.

As King developed the tale, it was one about a school shooting long before the modern era of such events.

The plot centers on a frightened third grade teacher, Miss Emily Sidley, who brings her deceased brother's gun to school. There she takes twelve of her students to a room and shoots each one dead. Soon, she is interrupted by another teacher, and stops before she can kill another student.

Miss Sidley is sent to a mental hospital after the murders, and eventually takes her own life.

In 1993, King wrote that the story had "no redeeming social merit whatever."

Later, Stephen King discussed the role of his book Rage (which also contains a school shooting) after the school shootings by Barry Loukaitis of February 2, 1996, in Moses Lake, Washington. Eventually King apologized for writing the book, saying he penned it during a troubling period in his life. He said he wished it never had been published. Finally in 1999, after Columbine, King told his publisher to pull it from publication and took it out-of-print. He told the Today Show’s Katie Couric: “I took a look at Rage and said to myself, if this book is acting as any sort of accelerate, if it’s having any effect on any of these kids at all, I don’t want anything to do with it, regardless of what may be the moral and legal rights and wrongs. Even talking about it makes me nervous.”

+++
H/T to Sibyl Hunter for some hints.
+++
For a followup, see Suffer The Little Children, Part II.
Posted by Loren Coleman at 4:26 PM

I've been following the Harris case in the news because the police are implying that it wasn't it accident. But if it wasn't an accident, what in the world was it? I don't even want to think about it.

Note: This all syncs with last week's Game of Thrones season finale entitled "The Children".

Today's update on the case:

"Two new details were added to a revised Cobb County criminal warrant Tuesday: Not only did Justin Ross Harris put his son in the car minutes before arriving at work on June 18, but he returned to his car hours later during his lunch break.

Harris placed his son, 22-month old Cooper, into a rear-facing child restraint in the backseat of his Hyundai Tucson after eating breakfast at a fast-food restaurant. He then drove to his workplace, a Home Depot corporate office about a half-mile away, according to the warrant.

The 33-year-old father returned to the car during his lunch break, opening the driver's side door "to place an object into the vehicle," the warrant states."

For a followup, see