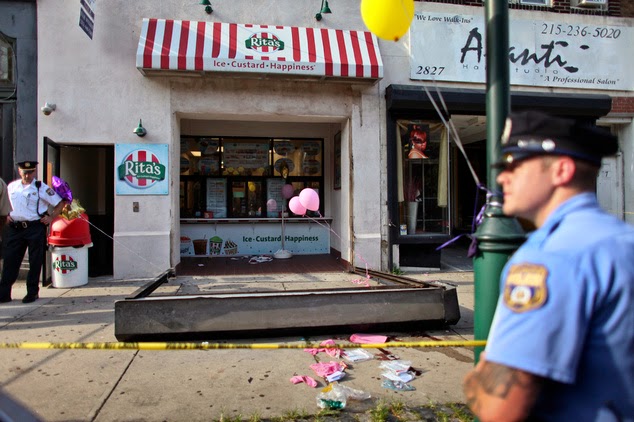 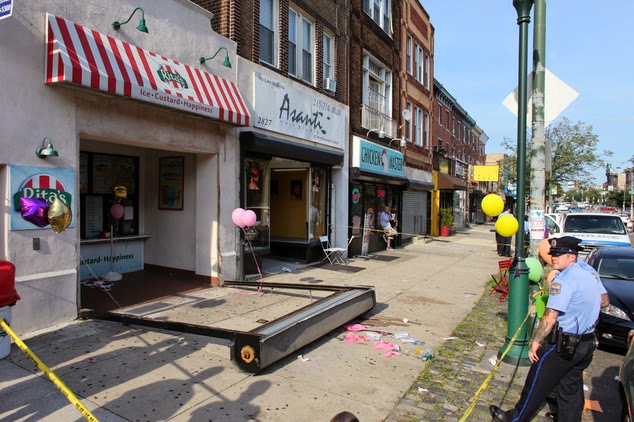 A 3-year-old girl (identified as Wynter Larkin) is dead after an accident occurred at a Rita's Water Ice Saturday afternoon [June 28, 2014].A security gate detached and came crashing down on the child shortly after 4 p.m. when she was standing outside a Rita's location at 2829 Girard Ave. in Philadelphia's Brewerytown neighborhood, according to reports.
An ambulance rushed the victim to Hahnemann University Hospital, where she was pronounced dead at 5:02 p.m., according to officials.
Police say the girl was with her mother attending a fundraising event for the Omega Psi Phi fraternity and the Alpha Kappa Alpha sorority when the tragedy occurred. (Read more at source.) 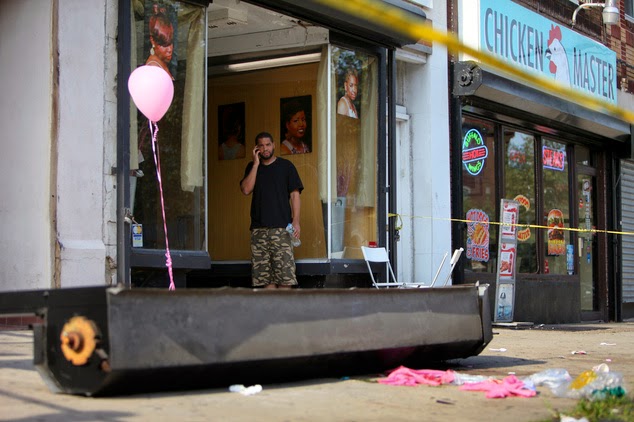 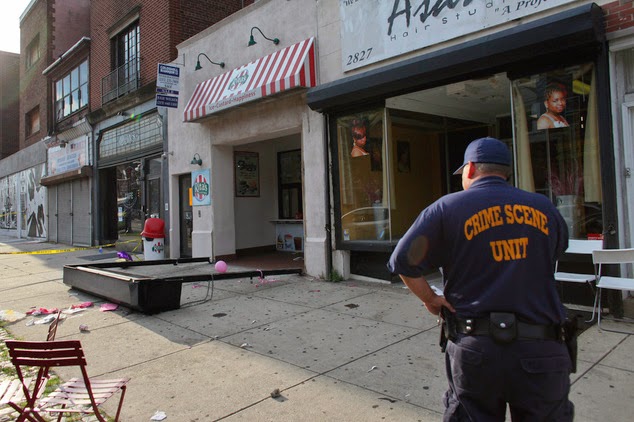 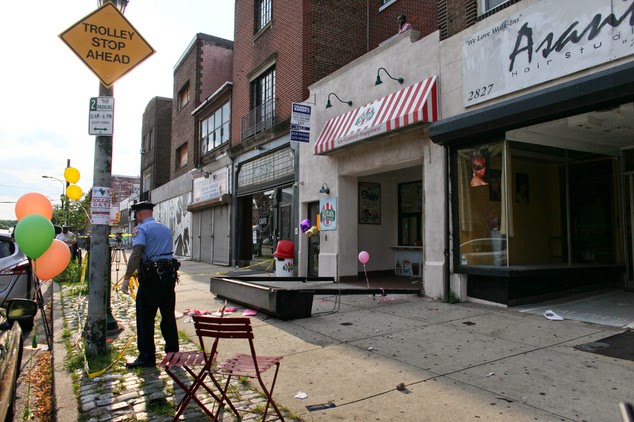 Photos from the scene show the black metal gate lying on the sidewalk, pink balloons still tied to it in front of the shop's red and white striped awning.
Several popped balloons appear trapped underneath the gate, which businesses typically roll down after hour to prevent crime. (These details were graphically mentioned in the Daily Mail.)

From the initials of the Greek phrase meaning, "friendship is essential to the soul," the name Omega Psi Phi was derived. That phrase was selected as the motto. Source.

Alpha Kappa Alpha (ΑΚΑ) is the first Greek-lettered sorority established and incorporated by African-American college women. Membership is primarily for college educated women, but not all members have attended college. The sorority was founded on January 15, 1908, at Howard University in Washington, D.C., by a group of twenty students, led by Ethel Hedgeman Lyle. Source.

In an update of an earlier "Suffer The Little Children" item about the child who died in a SUV in the Atlanta area, CNN reported:


The suspect in a Georgia toddler's death told police he used the Internet to research child deaths inside vehicles, a search warrant said.
The father, Justin Ross Harris, 33, has pleaded not guilty to charges of murder and second-degree child cruelty in the death of his 22-month-old son, Cooper Harris. The boy died after he was left seven hours in a sweltering SUV on June 18.
"During an interview with Justin, he stated that he recently researched, through the internet, child deaths inside vehicles and what temperature it needs to be for that to occur," according to a sworn statement in the warrant from a police officer. "Justin stated that he was fearful that this could happen."
According to search warrants from a Cobb County magistrate court, investigators seized a number of items from the father's home: An iPhone 5, Hyundai car, home laptop computer, computer tower, a Google Chromecast Internet searcher and other electronic devices.


Leanna Harris, the mother of a Georgia toddler who died locked in a hot car, has told authorities that she previously researched such deaths and how they occur, according to a police affidavit.

^^^^^^^^
In a followup on another earlier report, "Solstice Missing Teen Found Dead in Maine," details have emerged about his slaying:

Three young men, one of them from Sanford, Maine, face the possibility of life in prison after being charged Thursday [June 26, 2014] with the premeditated stabbing death of a teenager whose body was dumped last weekend in Lebanon, Maine.
Zachary Pinette, 18, of Sanford appeared Thursday in Dover District Court to be formally charged with the first-degree murder of Aaron Wilkinson.
His co-defendants, Michael Tatum, 21, of Barrington, New Hampshire, and Tristan Wolusky, 18, of Rochester, New Hampshire, appeared from the Strafford County Jail through a video link.
The three are charged with killing Wilkinson outside his house in Madbury, a small town next to Dover. Pinette drove them there from Maine after midnight on Saturday, and held a machete as the other two stabbed Wilkinson with knives and then the machete, according to documents filed by prosecutors.
The documents say that at 1:30 a.m. Saturday, Pinette aided Wolusky and Tatum in committing first-degree murder. The documents also say that Tatum stabbed Wilkinson with a knife, and that Wolusky used a “knife and/or machete.” Source.

It may not be a coincidence that this killing took place a few hours before the Solstice.

See also, "The Pied Piper of Hamelin."
Posted by Loren Coleman at 9:22 AM