According to information from a self-styled Greek Satanist and accused murderer, he was plotting a new killing for the Solstice this weekend. Is there something in the wind?

Let's look at some recent disturbing news in this realm. 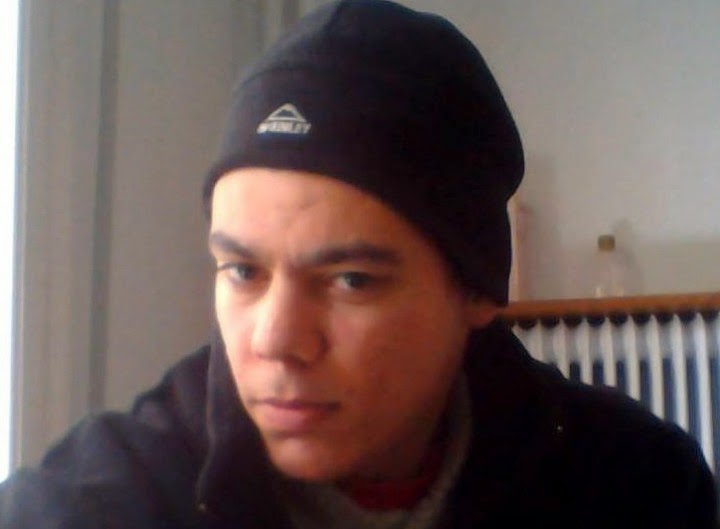 On June 16th, Satanist Papageorgiou, an actor's son, was arrested in Greece on suspicion of ritually killing a homeless woman in an Athens public square and planning a second murder for this weekend’s summer solstice.

A police statement said the Greek suspect confessed to killing the woman with a heavy stone during a pre-dawn “ritual Satanist ceremony” in the seaside Glyfada suburb.

Glyfada (Greek: Γλυφάδα, pronounced [ɣliˈfaða]) is a suburb of Athens, situated in the southern parts of the Athens Metropolitan Area. The area, which is home to many of Greece's millionaires, ministers and celebrities, stretches from the foot of the Hymettus mountain to the Saronic Gulf. It is the largest of Athens' southern suburbs. This fashion-conscious suburb is known in Greece for its upmarket cafes, well-known restaurants, boutiques and cosmopolitan summer clubs; Glyfada has also been called "Knightsbridge-on-Sea," "Hellenic Hamptons," or the "Beverly Hills of Greece."

The 41-year-old woman was found dead on April 20, 2014, Orthodox Easter Sunday, with severe head injuries. A nearby bench had been daubed in blood with Satanist insignia. Blood on a makeshift altar?

The suspect's arrest on Monday, was also in Glyfada. Police identified Papageorgiou by references to the killing on social media, DNA analysis and a fingerprint on a plastic bag containing the murder weapon, found in a nearby trash container.
The suspect allegedly told police that he had intended to carry out another ritual killing on the day of the summer solstice, but it was unclear whether or not he had selected a prospective victim yet, according to the Associated Press. 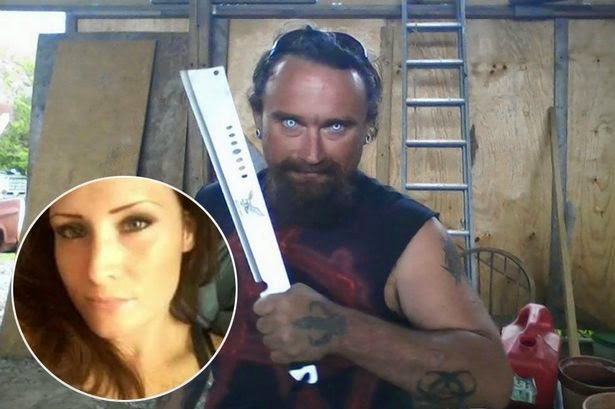 In Coffee County, Tennessee, devil worshipper Gregory Hale (pictured), 37, met Lisa Hyder, 36, on June 6, then attacked her later that same day, beheaded her and put her hands and feet in a bucket, before eating her.

The ex-slaughterhouse worker was arrested and quickly he admitted killing her and eating part of her body. Suspected cannibal Hale’s Facebook page is filled with images and descriptions of blood, gore, killing, and the metal band Slayer.

In one bizarre passage, two months ago, Hale talked about eating a vegetarian, writing: “would tha vegetarian taste like that fake soy meat like they got in sum fast food places???”

Gregory Hale noted he wished he could have met serial killer and rapist Richard Ramirez, known as the Night Stalker, who died in a California prison in June 2013.

Hale was arrested on June 8th, after he asked a friend to help dispose of Hyder's body.

A friend said the former slaughterhouse employee was a self-proclaimed satanist who was fired after his boss found him carrying out a ritual with animal parts.

Hale is being held in jail on a high bond and is due to face court on June 23, charged with murder and abuse of a corpse, reports the Daily Mirror. 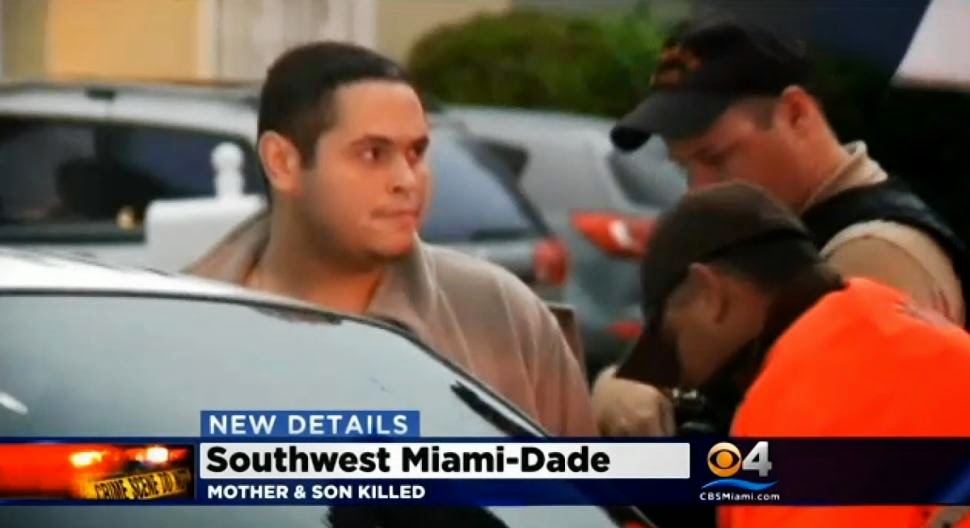 Ronnie Candelaria was arrested in Florida for the shooting deaths of a mother and her son.

The 21-year-old Candelaria is accused of the double murder in a SW Miami-Dade home. Candelaria said he wanted to kill the male victim because he believed he “was the Devil.”

Ronnie Candelaria allegedly shot and killed Gale Sikora and her son Anthony Sikora while they were inside their home in Arbor Courts on June 12, 2014, around 4 a.m. 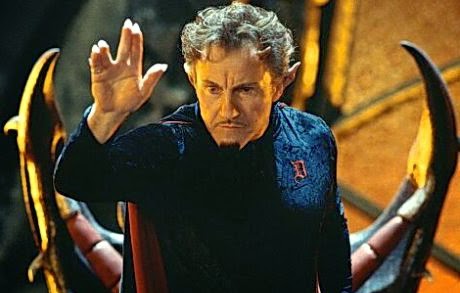 According to the arrest affidavit, the defendant went to the victims’ home to kill the male victim “because after watching the movies The Punisher, The Punisher-War Zone, Little Nicky, and the series Breaking Bad, he believed the male victim was the Devil.”

Little Nicky appears to be a conscious play on the moniker Old Nick, which is a colloquialism for the Devil. In the film, Nicky (played by Adam Sandler) is one of the three sons of the Devil. Two of Nicky's siblings say that Nicky's mother is a goat and torment him by controlling his body with their minds.

Claims of mind control is a theme throughout many of these Satanic killings.

Candelaria means "Candlemas" in Spanish, ultimately derived from Spanish candela "candle." This name is given in honor of the church festival of Candlemas, which commemorates the presentation of Christ in the temple and the purification of the Virgin Mary.

Among some conspiracy theorists, there is a notion that Solstice killings, murders, and sacrifices have been conducted against Hollywood celebrities and within other circles. While it may be healthy to take all of those kinds of thoughts with various grains of salt, let's, at least, register some of these thoughts here for the stake of the record.

(BTW, about those grains of salt...it is a common superstition that requires you to toss a pinch of the spilt salt over your left shoulder, into the face of the Devil who lurks there.)

While others wish to bring in the Illuminati to this discussion, it appears to be enough to look at this long list of solstice deaths, and thus stay with just the data, first.

One well-publicized solstice murder event was of the startling killing of five children by Andrea Pia Yates, on June 20, 2001, in Clear Lake, Texas. Yates was quoted as saying:


"It was the seventh deadly sin. My children weren't righteous. They stumbled because I was evil. The way I was raising them, they could never be saved. They were doomed to perish in the fires of hell."

She also told her jail psychiatrist that Satan influenced her children and made them more disobedient.

Discussions about such deaths appear to make an association with Solstices (summer and winter), and are often said to be on the 25ths of the months.

Brittany Murphy, who died on December 20, 2009, at the young age of 32, is listed as a "solstice sacrifice." Here is an eleven-minute video containing such a claim (and this is a claim that is that of the video producer, and not necessarily of this author).


Nevertheless, I would say, as a word of caution, various actors and actresses may wish to think twice about going to an Atlanta-area Waffle House on the Summer Solstice this year.
Posted by Loren Coleman at 3:53 PM

A few associations conjured up by the Brittany Murphy video.

- Brittany, the region in France where witchcraft was still in full bloom, according to an article in the Charleston News and Courier of October, 1903.

- Simon Monjack, the alleged handler who died five months later. Monjack reminds one of Montauk, the alleged mind control base, and hijack. Monjack died on the fateful date 23. At the time of her death, Brittany Murphy was 32.

- Thora Birch, co-actress in her film Deadline. Birch: the birch tree is associated with the Tír na nÓg, the land of the dead and the Sidhe, in Gaelic folklore, and as such frequently appears in Scottish, Irish, and English folksongs and ballads in association with death, or fairies, or returning from the grave (http://en.wikipedia.org/wiki/Birch#Culture)

- Thora: Thora or Tora is a Scandinavian female name (from the Old Norse Þóra)

From a sync post I wrote on 3/14/14:
There’s an amusing scene in the devilish, 2000 Adam Sandler comedy Little Nicky, where Nicky is talking with some pals and one of the Satanic metalheads gleefully plays some Ozzy Osbourne backwards on a turntable and asks Nicky about it.

Nicky dismisses the song and blows their minds when he pulls out a Chicago album and plays their 1970 hit “Does Anybody Really Know What Time It Is?” – backwards – and a voice is heard saying “I command you, in the name of Lucifer, to spread the blood of the innocent.” Another metalhead in a Motorhead T-shirt smiles and says “Oh my god, Chicago kicks ass!”

Indeed. The fern-bar faves have a dark side. Well, maybe not today. I saw a “reconstituted” Chicago play a show here in Oklahoma City and, well, lets just say that the two remaining members of America (“A Horse With No Name”) blew them off the stage. Chicago had seen better days. Perhaps a deal was made with El Diablo? Peter Cetera, pick up the white courtesy phone …

Anyway, back to Chicago and their brassy, upbeat hit “Does Anybody Really Know What Time It Is?” and its significance. It actually was recorded in 1969 and was first featured on their debut album Chicago Transit Authority. A great fusion of rock and jazz, when such sounds were becoming popular.

I bring up this song only because it featured prominently in last night’s “dust devil dream.” As I recall it, I am in an amphitheater surrounded by people I know (“You were there and you were there …” – oddly, Judy Garland’s version of “Somewhere Over the Rainbow” appears in Little Nicky). I am singing “Does Anybody Really Know What Time It Is?” and remembering every word, while I’m getting help with the harmonies from friends. It was actually a very exciting moment, singing that song.
- See more at: http://www.reddirtreport.com/dust-devil-dreams/does-anybody-really-care-about-time#sthash.AUES0I9m.dpuf

April 20th also marks A.Hitler's birthday. The Golden Dawn party in Greece seems to have elements of magic, via the name, and nazism, their badges and salutes.

In Czech 'sykora' = a titmouse, a type of bird.

"There's Something About Henry"
http://www.whale.to/b/henry.html

Diablada puneña during the Fiesta de la Candelaria in Peru: