Two separate travel-related incidents have occurred, both around 6 a.m. this Friday morning. One involves a bridge collapse and the other a FAA traffic control tower. Both appear to link to name games you have read about here. 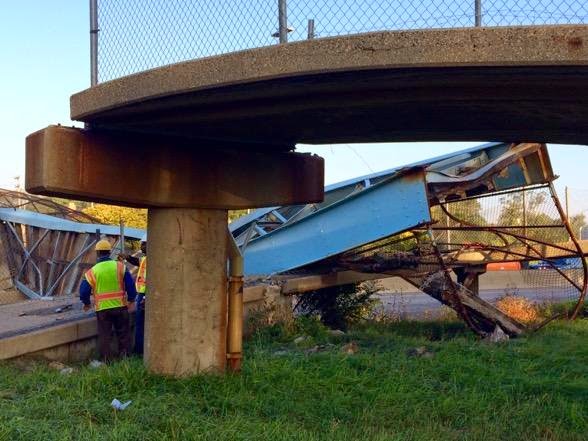 One person is dead, the driver of a waste-hauling truck on Friday morning, September 26, 2014.

The truck hit the Cathedral Road pedestrian bridge over Detroit's Southfield Freeway (M-39), which caused it to collapse, near West Warren Ave, near Warrendale.

Reports about the collapse came into police about 6 a.m. The waste-hauling truck's boom was extended too high to go under the bridge.

"When the boom struck the bridge, it actually pulled the bridge down with it," Michigan State Police Lt. Michael Shaw observed.

No one was on the bridge when it fell.

The driver was taken to a hospital and died. He has been identified, late in the day, as 54-year-old Stanford Michael Doll of Almont.

The Southfield Freeway (M-39) was closed from Interstate 96 to Joy Road. 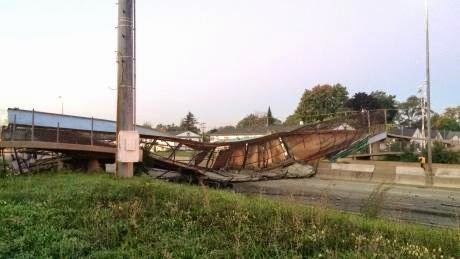 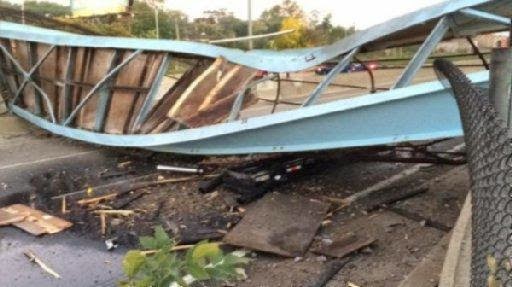 In a bizarre twist, Lions quarterback Matthew Stafford was on the scene mingling with observers after his car was stopped by the bridge collapse.
One of Detroit’s biggest sports stars was quickly — and safely — picked up by a member of the team’s security, a spokesman later confirmed, saying Stafford was uninjured.

Detroit Lions quarterback Matthew Stafford escaped danger early Friday morning, as his car would have soon been the one under the bridge. (The football player's nickname is Matty Moonball.)

Roop Raj of Fox 2 and others report the sixth-year pro was right near the bridge when the accident occurred: 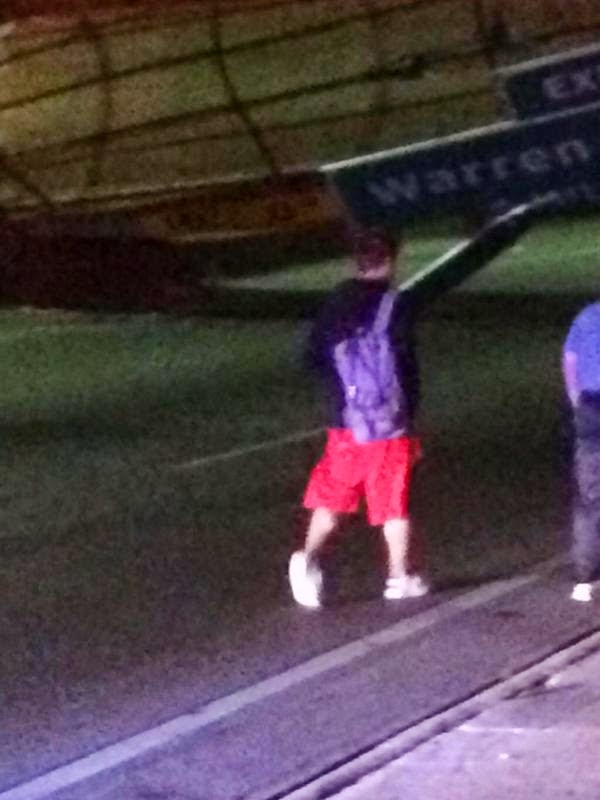 Please note, also pictured above, to the upper right, is the partial sign reading "Warren," a power name. In my 1983 book, Mysterious America, after discussing the special weirdness regarding name games, I wrote: "Cryptologic or coincidence? Jim Brandon should be credited with calling attention to the name Watts/Watkins/Watson, and its entanglement with inexplicable things. Some other names involved in mysterious events pinpointed by Brandon are Bell, Mason, Parsons, Pike, Vernon, and Warren. The influence of such names as Mason, Pike, Warren, and Lafayette, for example, issues, in some cryptopolitical and occult way, from their ties to the Masonic tradition."

WWJ’s Charlie Langton, reporting live from the scene, said, “The pedestrian overpass is totally down, smashed to bits, the sign for Warren Avenue is smashed to bits. It’s just a mass of concrete and metal, it’s incredible.” 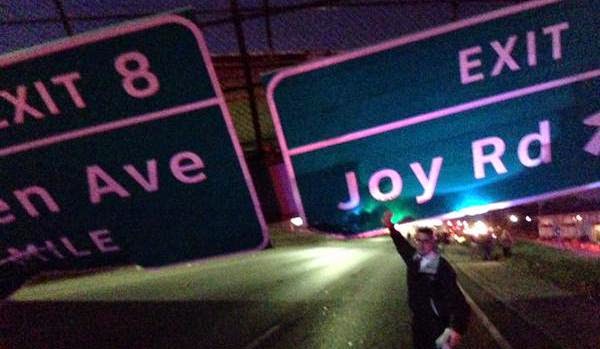 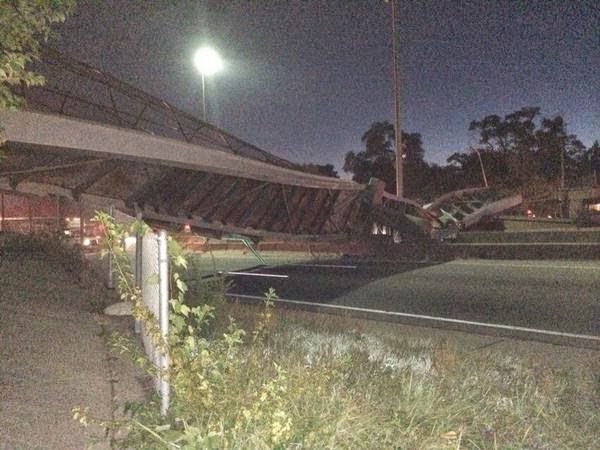 Meanwhile, also in the Midwest, all Chicago air traffic was stopped early today after a deliberately set 6:00 am fire at a Federal Aviation Administration air traffic control facility in the Chicago suburb of Aurora, an FAA spokeswoman says. 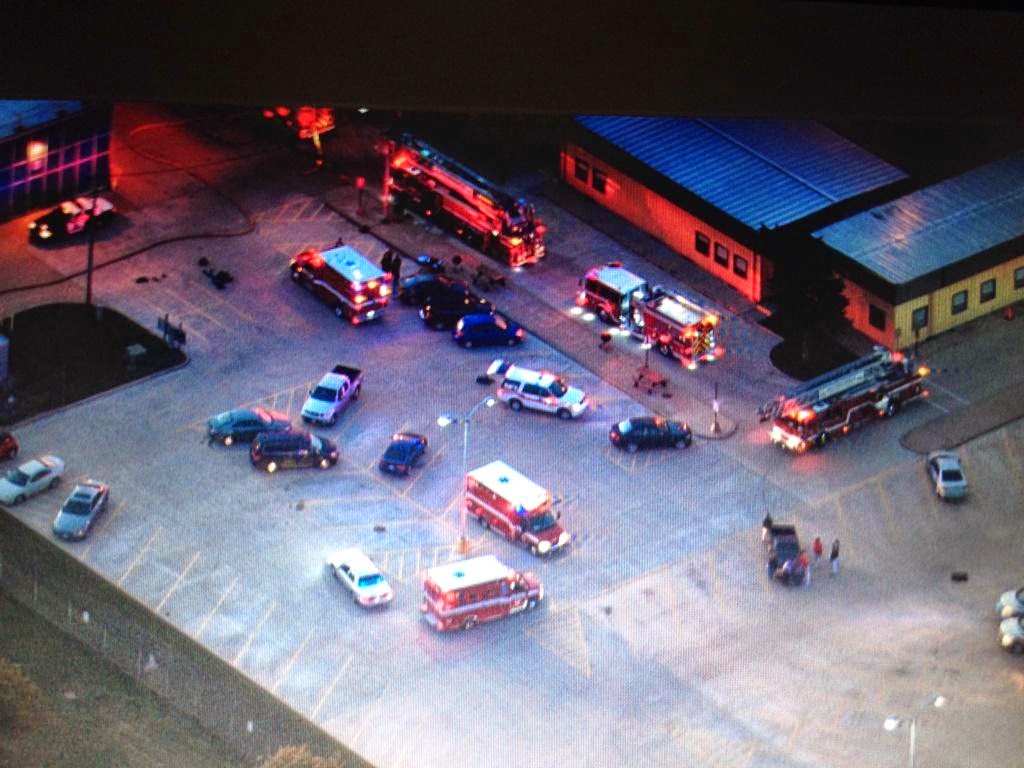 Air travel for thousands of people across the country was thrown into disarray Friday morning after a fire closed a major Chicago-area air traffic control center that directs traffic across a large swath of the Midwest.
Mystery surrounded the interruption, as authorities reported not only that a fire closed the Federal Aviation Administration control center in Aurora, Illinois, but also that a man was found with self-inflicted wounds there.
Responders found a person suffering from cuts to at least one wrist, two law enforcement officials told CNN, citing initial reports from investigators. The person is being treated and questioned about the fire, which appears to have been intentionally set, the officials said. Investigators believe the person tried to commit suicide, the officials said.

The fire is not believed to be a terrorism act, Aurora Police Chief Greg Thomas told reporters. It appears to have been set by a contract employee, he said. Two people were injured: the male suffering from self-inflicted wounds and a man, 50, who was treated at the scene for smoke inhalation, Thomas said. CNN


Planes destined for Chicago-area airports, including O'Hare and Midway, won't be allowed to depart until at least 10 a.m. CT (11 a.m. ET) because of the fire, the FAA says. The Chicago ground stop will likely create a ripple effect for travelers around the nation.

There's also breaking news out of Moore, Oklahoma, of a workplace violence event, involving a beheading. I will deal with that separately, in another posting, later.

And meanwhile the Eric Frein case just gets weirder:

Although Mr. Frein, 31, of 308 Seneca Lane, Canadensis, was not sighted at the historic inn, police said he was known to visit the resort when it was open. It closed in 1991.

"(There is) no specific reason as to why it is being searched," said state police spokesman Trooper Tom Kelly in an email Friday morning.

And as for the Buck Hill Inn, where they seem to have sent the SWAT team for no particular reason:

In 2000, the Buck Hill Inn was used as a location for MTV's Fear, and several liberties were taken with its history, including claiming that Buck Hill Falls was the site of 73 murders, the suicide of one maid, and one room being built on ley lines, as well as ghost sightings. Obviously, none of this has been proven to be true, yet the Inn still has rumors of being haunted from the local residents.

In July 2003, The Buck Hill Inn was reported on fire due to arson. Two men were arrested and were both charged with arson, trespassing, burglary, criminal mischief, risking catastrophe, and other offenses.

Ah. I had sent you a link about the Chicago fire because of the Aurora connection, but I see you were already aware of it ;)

In any case, it's an interesting 'merge' between the Red Dawn of 2012, and the Trident stories of this year involving air travel.