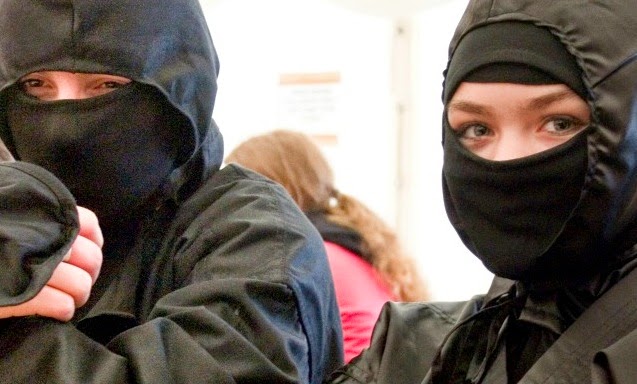 On a quiet location near the corner of 9300 South and 4800 West, West Jordan, Utah, what seemed like the beginning of a home invasion was caught in progress by the home owner. But it quickly turned into something unexpected.

Two sister wives, apparently married to a polygamist, were disguised as ninjas. They were discovered trying to break into the home of a 15-year-old girl who was due to testify at their shared husband's rape trial. The women, armed with stun guns and knives, reportedly tried to abduct the teenager from her West Jordan home in Utah.

Everyone involved - the suspects and the home’s occupants - are all part of an extended family, reportedly. The two ninja women claim to both be married to an uncle of a child living at the home.

Hearing a sound, then silence, a male relative of the targeted girl said:

I went to the bottom of the stairs and saw a couple of ninjas coming down. They were all dark gray or black, and they had black rubber gloves on and masks. All I could see was their eyes. My adrenaline was pumping so bad. They grabbed for me and one of them covered my mouth, and the other grabbed my throat, but they were both pretty small so I threw them back and started shouting to get anybody awake that I could.

The two ninja-clad women, aged 18 and 22, allegedly assaulted the home's two adults, but the homeowner managed to subdue one attacker without using any weapon, then subdued the second woman, who had a stun gun, by using a samurai sword.

Is there a samurai/Ninja subculture in Utah that most of us are unaware of?

Police do not believe the women and the uncle belong to a polygamist church.

Law enforcement authorities are not releasing any names to protect the privacy of the teen rape victim. If a name game is being played, it remains hidden for now.

The beginning of the 4800 West block, in West Jordan, Utah,
where the incident occurred.


Some past Ninja episodes have been deadly and criminal.

In 2013:
A ninja in Sioux Falls, South Dakota who put a man in a chokehold and stole his backpack. Once police tracked him down, the ninja ran and was soon arrested, but not before busting up a cop's knee.
A ninja in Uniontown, Pennsylvania who stole a woman's cellphone as she was unloading groceries in her driveway.
A ninja in Vancouver, Washington who busted into a bar with an expandable baton and demanded money from the cash register. When the bartender told him it was empty, the ninja left.
A ninja in Houston who cut a hole in the top of a Walgreens, repelled down and stole a bunch of Hydrocodone. He remains at large.
A ninja in Santa Cruz, California who threatened his neighbor with Chinese throwing stars and nunchuks that he was "swinging wildly in the air." 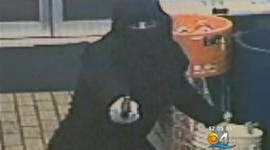 Surveillance video at a convenience store in Dania Beach, Fla. on Friday, Sept. 7, 2012 allegedly shows one of two men who have been on a robbery spree in Ninja garb
CBS MIAMI

On the 1st of September 2008, in Johannesburg, Morné Harmse, an 18-year-old matric pupil (one who is in the final year of high school in South Africa) allegedly killed a fellow student with a sword. Harmse apparently had envisioned a widespread bloodbath in his school. A follower of the band Slipknot, he had on a Corey Taylor-styled clown mask, three swords, including a smallish Katana and a Sekizo Ninja sword, in his belt, and gloves. He beheaded one fellow student and injured three others. Source.

On the 11th of October 1991, five days before the Luby's Cafeteria massacre, there was a highly publicized "going postal" situation tied to the US Post Office in Ridgewood, New Jersey, which left 4 dead. The killer in that case, Joseph M. Harris, was arrested wearing a gas mask and bullet-proof vest, and also dressed in black military fatigues, black combat boots and a black silk Ninja-style hood, with a 9-millimeter Uzi handgun, a .22-caliber machine gun with silencer, a samurai sword, three hand grenades and some homemade bombs. Source.

Posted by Loren Coleman at 3:41 PM