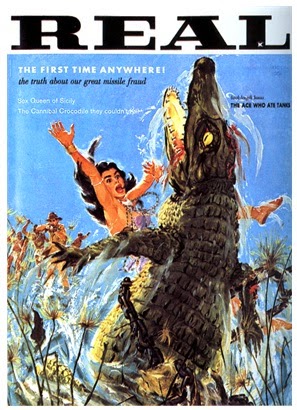 On the afternoon after September 11, 2014, a woman from Bangkok died by suicide when she jumped into a crocodile pit at Samut Prakan Crocodile Farm. She had carefully removed her shoes before jumping into the water below. The "taking off and neatly placing shoes" behavior has been observed frequently by suicidal individuals jumping from bridges and buildings. 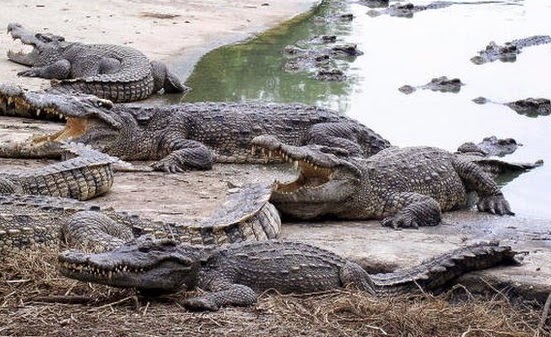 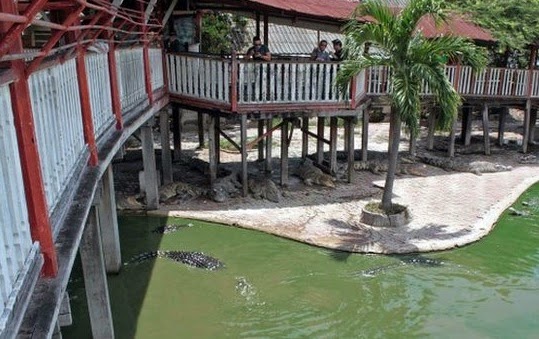 This Bangkok pit contains hundreds of adult crocodiles, and the Samut Prakarn Crocodile Farm and Zoo houses a reported 100,000 crocodilians. Wanpen Inyai, the 65-year-old depressed woman from Thailand's Min Buri district, reportedly knew what she was doing, as much as anyone who dies by suicide can.


"A similar incident allegedly took place in September 2012, when a man lodged a complaint with the Crime Suppression Division after his wife went missing. He suspected she jumped into a crocodile pond because she had planned to visit the farm before she disappeared. That case is still a mystery as the crocodile farm has declined to comment," reported the Bangkok Post.

Ms. Wanpen's "death mirrored that of a woman who killed herself in 2002 the same way at the same farm, and another suicide reportedly took place a decade before that," said the BBC.

There, it turns out, have been several suicides by crocodile.

The Indian Express published an account on September 6, 2012, in which the 36-year-old wife of Sunai Jisathra, was seen by workers at this same crocodile farm to have "jumped intentionally" into the crocodile pit. Source.

1990: A woman climbed the fence at the same crocodile farm, Samut Prakarn, and was swarmed by crocs as hundreds of tourists watched in horror. [LA Times]
1994: Following the death of President Felix Houphouet-Boigny of the Ivory Coast, a man declared that without the president life wasn't worth living and jumped into the crocodile-infested moat outside the presidential palace in Yamoussoukro. Crowds watched for two days as the crocs chewed on his body. [Glasgow Herald]
2002: Again at Thailand's Samut Prakarn croc farm, a depressed woman waded into the crocodile pit. A spectator later said, "The moment the crocodile grabbed her body, she even hugged onto him. It was horrifying." [The Nation]
2011: A South-African farm worker, depressed after a fight with his lover, waded into the crocodile-infested Lepelle river. No one saw him actually being eaten, but someone later reported seeing a human leg dangling out of a crocodile's mouth. [Daily Mail]

There could be many more.

Crocodilians include crocodiles, alligators, and in total, 23 different species. There is only one place in the USA to see all 23 known species - St. Augustine Alligator Farm Zoological Park.

While extremely rare, near fatal interactions with American crocodiles (Crocodylus acutus) do occur. American crocodiles are dangerous to humans; attacks in Mexico, Costa Rica, and Panama are not unprecedented. In May 2007, two instances occurred within one week of children being attacked and killed by this species—one in Mexico just south of Puerto Vallarta and one in Costa Rica. Even this year, on August 24, 2014, a man and his female companion were swimming in a canal in Gables by the Sea, a community in Coral Gables, Florida, when they were bitten in the shoulder and the hand by an American crocodile. 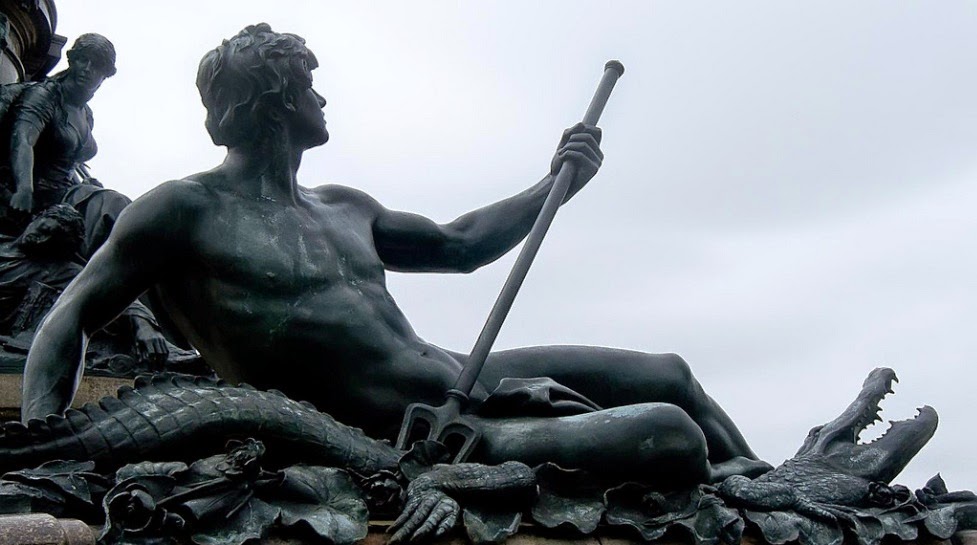 Youth with trident personifying a thriving new country spears an American alligator on the Washington Monument in Eakins Oval; photographed near the Philadelphia Museum of Art, Philadelphia, Pennsylvania.


Cable television has institutionalized "Shark Week," in which programming and documentaries take the "fear factor" within humans regarding sharks and translate it to the small screen. Of course, it all goes back, during our modern era, to Jaws, for before the successful movie Steven Spielberg made in 1975, there was Peter Benchley's 1974 book Jaws.

They seem to have not discovered "Croc Week," or "Gator Week," per se, yet.

Beginning in 1976, when the first records in Florida started, fatal alligator attacks have been on the increase. Some occur in the late summer and early fall. For example, on September 28, 1977, George Leonard, 52, was killed by an alligator while swimming in the Peace River Canal, Charlotte County, Florida. On September 10, 1978, Philip Rastrelli, 14, was killed by an alligator while swimming across the Hidden River Canal of Bessie Creek, Martin County, Florida.

But still, shark attacks generally get more attention by the media. 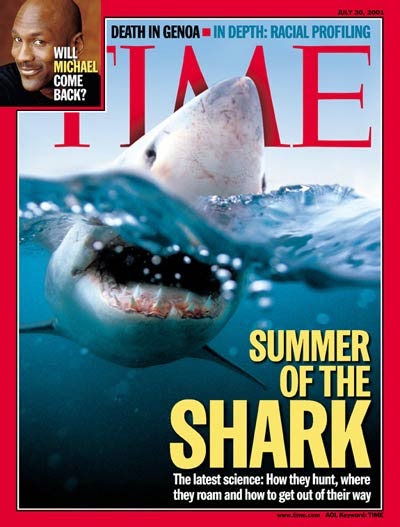 There seemed to be so many shark attacks on humans right after the turn of the century that Time declared, in the Northern Hemisphere, at least, that 2001 was experiencing “The Summer of the Shark.”

But there was something more sinister waiting in the wings. First, however, the "Summer of the Gator" was about to happen.

In my earlier twilight language book, The Copycat Effect: How the Media and Popular Culture Trigger the Mayhem in Tomorrow's Headlines (NY: Simon and Schuster, 2004), I noted:


The summer of 2001 began quietly enough, with local newspapers in Florida talking about some deathly events, which before it was over, had everyone wondering if every lagoon in the Sunshine State was crawling with human-eating alligators. At first, the stories were only of local interest. On May 4, 2001, an 8-foot alligator in a Venice pond killed Samuel Wetmore, 70, near his home in Sarasota County, Florida. On June 23, 2001, little Alexandria Murphy, 2, wandered from her Winter Haven back yard, then was dragged into Lake Cannon in Polk County, Florida, by a 6 1/2-foot gator and killed.

Then all hell broke loose, with the media engaging in epidemic reporting, taking up the thread of 'gator and crocs as the next big new threat on the horizon. Alligators were popping up everywhere. By the end of that month, I had accounts crossing my desk of out-of-place caimans, alligators, and crocodiles being seen and caught in downstate New Hampshire (a 2.5 ft caiman), Central Park New York City (a 2 ft caiman), and on the same day, June 27, 2001, from Buffalo, New York (a 4 ft alligator caught) and off an island in the middle of the Rhine River, Germany (a 5 ft “crocodile” sighted but not caught).

The alligator attacks concentrated in Florida, however. On Sunday, July 1, 2001, a human arm that “appeared to have been bitten” off by an alligator, was found in a canal west of Fort Lauderdale, Florida. The rest of the body could not be found. A sort of high sad comedy was reached when the Florida papers published this kind of remark from a member of the Broward County Sheriff’s Department: “We're sure if they survived and they're missing a right arm, they would have come forward by now. Detectives have no idea what happened with this body part, whether it was some sort of accident and the person was eaten by an alligator and this is what's left.”

During the next week in July, echoes of the Florida ‘gators were heard in the Midwest again. Authorities were reporting the sightings of three alligators near Andrews, Indiana, in the Wabash River close to the Highway 105 bridge. No one was hurt but armed officers were trying to locate the critters.

Back in Florida, Tammy Woehle, 22, was out walking her dog, Lady, before dark, on Big Talbot Island, near Jacksonville, when an 8-foot-long alligator attacked her, according to a report from July 9, 2001. The gator grabbed and ripped part of the muscle out her leg, and pulled her to the ground. The news accounts almost made you feel the gator was a sneaky bastard because it crept up to her as she stood on a sandy beach, away from the water’s edge and away from high grass. She escaped with a six-inch wound on her thigh. Before the attack, the Florida Fish and Wildlife Conservation Commission had held a news conference to calm the public. They had noted that the seven alligator attacks in Florida in 2001 were slightly below average. Talk about bad public relations timing. The media would have nothing to do with it. The Woehle attack was widely reported, and it was clear to the public, from what they were hearing in the press, this was a dangerous summer. Then drumbeats announced that a much more sinister danger was lurking just offshore.

A few pages later, I wrote:

Ellen Steele, 81, heard the screams of her 81-year-old husband Robert on September 11, 2001, and couldn’t do anything to save him. But most people never heard about Robert, and how an 11-foot-long alligator near Sanibel, Florida, fatally attacked him as he walked his dog that day. There was something much larger on the media horizon that day. On September 11, 2001, four jet airliners, with Flight 11 being the first, were involved in the largest single homicidal-suicidal effort in history to bring bloodshed, death, and terror to the core of American society.


The State of Florida’s “Alligator Attacks – Fatal” sheet has this:


Robert Steele, 82, was attacked near his house on Rabbit Road in Sanibel on September 11, 2001. Steele was walking his terrier on a narrow path that ran between two wetland areas close to JM “Ding Darling” National Wildlife Refuge when a 10’9″ gator attacked him and dragged him into the water severing his leg. FWC officers destroyed the gator. Another six-foot alligator was also removed.

Robert Steele is no longer a forgotten deaths of 9/11. 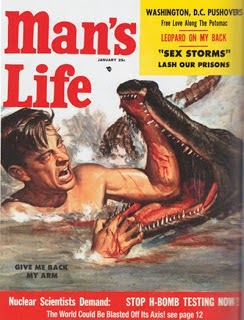 Email ThisBlogThis!Share to TwitterShare to FacebookShare to Pinterest
Labels: 11, 9/11, Alligators, Crocodiles, Florida, Robert Steele, Summer of the 'Gators, Summer of the Shark

It should be noted that the Gables by the sea attack is the first recorded and verified incident of an attack on human beings by an American crocodile in North America. Attacks and fatalities by the species are not uncommon in Central American countries where people traditionally have had a much closer daily interaction with the water environment of the animals. As a boy living in Gables by the sea we never saw crocodiles. Their appearance in urban areas has only become common since the rebounding of the species due to protection over the last 20 years.

I'm not sure if it was ever "authentic", but the "Faces of Death" movie series showed a poor parachutist landing at an Everglades Gator Farm and being reduced to bits. I think these movies were later debunked though.