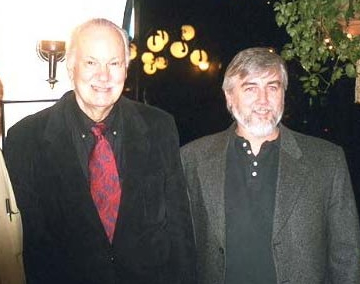 John A. Keel knew that it wasn't about "predicting" as much as "looking for patterns." As we come out of this "recession," it is good to recall his insights.

At Fortfest 1992, John A. Keel discussed his research findings (mostly ufological & hints of the cryptozoological) keyed to "pivotal years," e.g. 1848, 1968, 1973, and 1975. In the last 60 seconds of this video, Keel was asked about the interrelationship of Forteana and economic collapses.

After Keel's 1975 book was adapted into the 2002 film, The Mothman Prophecies, "Mothman" became a household name. However, among a select few, it was John Keel that was the star, not the monster. One of our own had crossed over and had a big tent Hollywood movie made from one of his books.

In January 2002, when the film was first released, Fortean historian and author Jerome Clark said that he felt a sense of sincere pride for John Keel when he saw Keel's name flash on the movie theater screen. It was a good moment.

Among the press, the Point Pleasant Daily Register shared this: "As several celebrity deaths have swept the nation in recent weeks, perhaps the closest to the area is the death of John Keel." 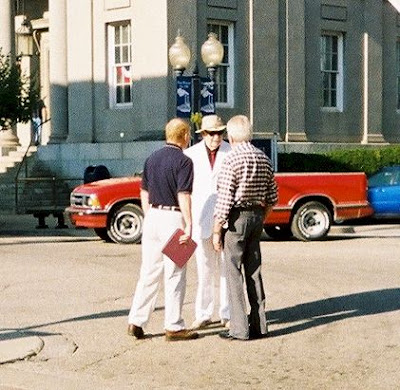 Certainly a focus among the Fortean, cryptozoological, and ufological communities, it was good to see in the days following Keel's passing a new awareness of him in the mainstream media:

Garuda: Harbinger of Doom, from an Indian postcard, being sold by a New York City vendor on a walk home from Keel's apartment. Credit: Doug Skinner.

At top, at his birthday party in 1994, John A. Keel is the Fortean/demonologist, the man in black, shown with Fortean/cryptozoologist Loren Coleman, in a photo by the Fortean/anomalist Patrick Huyghe.

He, I'm feeling pretty smug about myself, for having been born during a major UFO wave on a "pivotal year" (Oct 3rd, 1973). So I guess my condition as a Fortean student was pretty inevitable ;-)

I put this page together for Phyllis Benjamin and INFO after Keel's death:

A very nice tribute to Keel! Thanks, Loren.

Brian Jones produced an album by the Master Musicians of Jojouka in Morocco, also known as the Pipes of Pan. Oh, hello Professor Pan...

Excellent blog about John Keel that reprints his newsletters and whatnot. Very well done:
//www.johnkeel.com/

Anybody interested in this material needs to Google: The Cross, The Rabbi, and The Skinwalker

Those not having done so should read all of John A. Keel's works starting with "Our Haunted Planet" through to "The Eighth Tower." There is something about his works that, with the aging provided by time, after reading them causes the mind to perceive deeper with sharpened sight/insight.