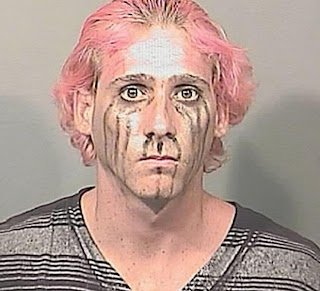 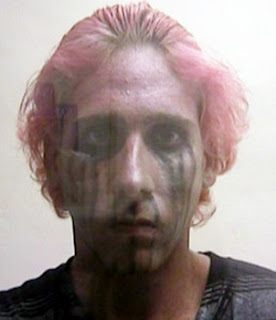 An allegedly unstable Joker copycat (who use to live in a trailer park named Aurora) was arrested on September 5, 2012, after he walked into a Melbourne, Florida movie theater dressed as the "infamous Batman villain, The Joker," reported the media on Wednesday. 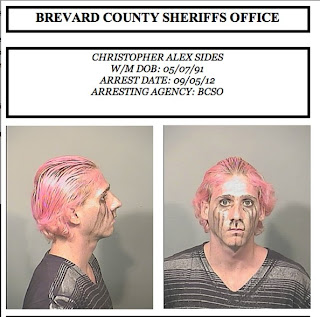 The individual is being held in the local jail's mental health ward. He was identified as 21-year-old Christopher Sides of Cocoa, Florida, and was arrested on a warrant for a previous felony charge. 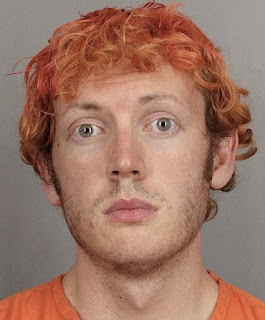 WFTV learned Sides has been involuntarily committed for mental health issues three times in the last three years. Sides was arrested Wednesday morning after theater-goers reported a man wearing Joker-like makeup at the Premiere Theater on West Hibiscus Boulevard. The caller said the man was pacing outside the theater before entering the building. Police said they confronted Sides as he was leaving through the front doors of the theater. According to police, Sides had purchased a ticket to see The Expendables 2.

Police said they learned Sides, who had bright pink hair and white and black face paint, had a warrant for his arrest for failure to appear on a previous misdemeanor charge. He was taken into custody for the warrant and transported to the Brevard County Jail. Police said Sides made no threats at the theater and was cooperative with officers. He did not have any weapons on him, police said. However, Sides gave investigators no explanation for his hair and face paint and claimed he had no knowledge of the massacre in which James Holmes is suspected of killing 12 people in an Aurora, Colo., movie theater during a screening of The Dark Knight Rises in July.

WFTV was there when Sides was taken to jail. Reporter Kevin Oliver said Sides was grinning ear-to-ear with makeup running down his face, even sticking his tongue out at WFTV's camera. WFTV's Renee Stoll spoke with some of Sides' friends Wednesday night. One man said he doesn't think Sides would be capable of hurting anyone, while othersdisagreed, calling him unstable, with a past to prove it. "I didn't think he was that type, but I knew he was weird," said one friend.

Former neighbors of Sides said they could never forget a neighbor like him. They said he caused a lot of trouble before he was evicted. "He dressed like a female. He walked around like a girl," said Trina Kitchen.

"I cleaned this unit out and there were sex toys in here and everything, so he was weird," said former neighbor David Springer.

"He was very unstable, swinging samurai swords. He's had a lot of confrontations with a lot of the neighbors," said former neighbor Joe Astrologo.

But one friend of Sides said he is just misunderstood. "He was never a violent person, just an exhibitionist is the best way to put it. [He] liked the attention," said Sides' friend.

(Thanks to Chris, Travis, and Doug for initial news tip.)
Posted by Loren Coleman at 11:21 AM

WFTV's video news report mentions that Sides at one time resided in a mobile home park called Aurora Park:
http://www.wftv.com/news/news/local/man-dressed-joker-arrested-movie-theater/nR32g/
Also, the bail amount of $5,555 seems odd. Interestingly, 5555 is the Thai text-speak equivalent of LOL, as five is pronounced "ha" in Thai. So 5555 = "Ha ha ha ha!" The Joker laughs at us again.

{Ahem} that would be "Sir SE".
LOL! (though oddly appropriate to the context I'm following)

Sometimes in the calendrics syncs you can use the resulting numbers to confirm.

In this case I use the 195 of the simple gematria value of CHRISTOPHER SIDES as a "checksum" value. Which I compare to the corresponding date in the calendar.

I break it as a date to 19/5
(Richard C Hoagland followers can chime in there!)

I can't put my finger on it, but it seems creepy to me that an iconic character like the Joker, that has spanned multiple generation is thought to have red hair. Jack Nicholson sported Green hair when he was the Joker. Even those who grew up watching Cesar Romero as the Joker would remember his GREEN hair.

This is great example of a copy-cat, even copying the wrong hair color.

Aurora (Jeanne-Marie Beaubier) is a fictional character, a Canadian superheroine in the Marvel Comics universe. She is the twin sister of Northstar and the former lover of Sasquatch. She has also been in a relationship with Wild Child. Sasquatch (Walter Langkowski) is a fictional character, a superhero in Marvel Comics' universe. He first appeared in Uncanny X-Men #120 and was created by John Byrne. So an Aurora & Sasquatch connection.

The Northstar character, as a young adult, belonged to the Front de libération du Québec, a terrorist organization that sought the creation of an independent Québec state. This resonates with Richard Bain's recent shooting in Montreal. Richard Bain's lodge is located on the shore of Lake Wade, which brings to mind Wade Michael Page, the gunman who attacked the Sikh Temple last month. Watching these events unfold reminds me of zooming in on a fractal.