The traditional Warlocks' logo is the Phoenix.

Recent activity regarding the City of Phoenix was detailed here on Friday. 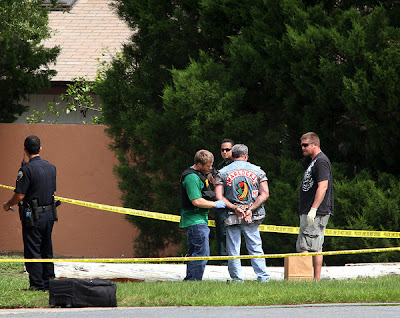 
The Orlando Sentinel reports that the Warlocks were founded in Orange County in the late 1960s by Navy veteran Tom “Grub” Freeland. The club now has chapters throughout the U.S., England and Germany.
Members of the Pennsylvania Warlocks motorcycle club came to Florida to establish a chapter in Seminole County earlier this year but are not associated with the Florida Warlocks. According to records, the four men who were charged in the shooting are associated with the Pennsylvania club.

Law enforcement members talk to a man with a version of the motorcycle gang Warlocks logo on his jacket at the Veterans of Foreign Wars (VFW) Post in Winter Springs, Florida on September 30, 2012. Photo: Jacob Langston.

On Sunday morning, September 30, 2012, at the VFW Post 5405, 420 North Edgemon Drive, Winter Springs, Florida, a shooting broke out. It has left two people dead and one critically injured. Authorities think all three victims were motorcycle-club members.

What was to be a charity run by a motorcycle club at the VFW Post turned ugly at 10:40 a.m. when riders were having breakfast and armed men came in and began shooting. A number of armed men started firing, according to witnesses at the scene who reported hearing up to 50 shots fired. The name of the other biker club was unknown, at press time.Witnesses claimed other Warlock affiliates came to the post during the incident.

Authorities have detained numerous individuals and gathered a number of weapons. Details are sketchy as to what exactly happened.

The Warlocks have made headlines around the central Florida region several times in recent years:

•In August 2012, the club's Melbourne headquarters was destroyed by a suspicious fire.

•In February 2012, a Windermere police officer was fired after authorities learned that he had been a member of the Warlocks and had a history of drug arrests.

•In 2011, three men thought to be Warlocks were removed from a Winter Park movie theater during a showing of Machine Gun Preacher after one of them was reported to be carrying a knife.

•In February 2011, a probationary member of the group was sentenced to life in prison for a 2009 shooting in Orange County.

•In 2003, an undercover operation by the ATF resulted in 34 arrests of Warlocks and Hell's Angels in six states, including Florida.

The Warlocks are #6 on the list of the "Top 10 Notorious American Biker Gangs."


The Warlocks Motorcycle Club was founded in 1967 in Florida, USA by ex-US naval servicemen serving on the USS Shangri-La aircraft carrier. It is a "one-percenter" motorcycle club with chapters in various parts of the United States, UK and Germany. Established by Tom "Grub" Freeland, an ex-US Navy sailor, on the outskirts of Orlando, Florida in 1967, its Mother Chapter is still based there. They have over nine chapters in Florida, five in South Carolina, four in Virginia, three in West Virginia, one in New York, two in Lincolnshire, England, two in Germany and one in Canada. There are also several Nomads who live and work in states that don't have Warlocks chapters. The club's insignia is a blazing Phoenix between a top and bottom rockers, and their colors are black, red and yellow and mottos include "Our Business is None of Your F**king Business" and "Warlocks forever, forever Warlocks" ("W.F.F.W."). ~ Source. 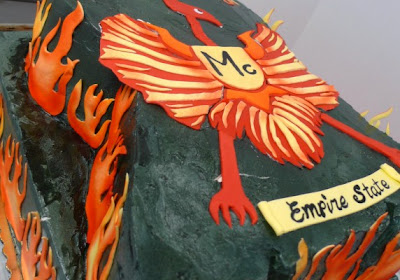 Although the Phoenix is the Warlocks logo, some in the media incorrectly identify the club's insignia as a Harpy, a legendary winged creature in Greek mythology.

For a phoenix reference side by side with a false representation of a harpy, see:
Shakespeare, The Tempest, Act III, Scene iii:
Sebastian: "...in Arabia there is one tree: the phoenix’ throne; one phoenix - at this hour reigning there."
Later...
[Thunder and lightning]. Enter Ariel like a harpy claps his wings upon the table, and, with a quaint device, the banquet vanishes]
Prospero: "Bravely the figure of this harpy hast thou performed, my Ariel; ...Of my instruction hast thou nothing bated... My high charms work, And these mine enemies are all knit up in their distractions. They now are in my power..." ~ Sent in by MB

The biker/phoenix link brings to mind the previously discussed Johnny Lewis tragedy. Lewis (a redhead who bore a slight resemblance to James Holmes) was well known for portraying a biker in the television program Sons of Anarchy. He was raised as a Scientologist, and acted in Scientology training films. The "Birthplace of Scientology" is Phoenix, Arizona. During Lewis' rampage, he performed the witchy (warlocky) act of dismembering a cat.
It gets syncier: The recently released film The Master, a thinly disguised critique of Scientology, stars Joaquin Phoenix, who portrays Freddie Quell, a character who rides a motorcycle. ~ Enki

One of the Columbine massacre survivors has recently created a support group for victims of mass violence. He is calling it "Phoenix999." ~ Starviego

On May 2, 2012, a neo-Nazi militia leader Jason "J.T." Ready killed four people and himself in Gilbert, Maricopa County, Arizona. Previously, he would gain publicity from bringing his Border Guard organization to an Occupy Phoenix rally.

Jared Lee Loughner was a military recruit at Military Entrance Processing Station in Phoenix, Arizona. His shooting at Democratic Representative Gabrielle Giffords' rally in Tucson on January 8, 2011, left 19 shoot, six dead, including a judge and the granddaughter of the former manager of the Chicago Cubs.

A mass shooting occurred at the Phoenix campus of the South Mountain Community College resulting in three people wounded on July 24, 2008.
Posted by Loren Coleman at 11:59 PM

The biker/phoenix link brings to mind the previously discussed Johnny Lewis tragedy. Lewis (a redhead who bore a slight resemblance to James Holmes) was well known for portraying a biker in the television program Sons of Anarchy. He was raised as a Scientologist, and acted in Scientology training films. The "Birthplace of Scientology" is Phoenix, Arizona. During Lewis' rampage, he performed the witchy (warlocky) act of dismembering a cat.

It gets syncier: The recently released film The Master, a thinly disguised critique of Scientology, stars Joaquin Phoenix, who portrays Freddie Quell, a character who rides a motorcycle.

Here is one more: A few days ago, in his post "Season of Suicides: Of Phoenix, Fox and Paradoxes," Loren posted information about Andrew Engeldinger's mass slaying/ suicide at Accent Signage Systems in Minneapolis, Minnesota. In 2002, the L.A. based neo-psych band The Warlocks released their Phoenix EP, which has a song called "Minneapolis Mad Man." (There is a personal sync here, too. The British musician Sonic Boom has recorded with The Warlocks. My old band Interstellar Policemen once opened for Sonic Boom at a club a few hundred feet away from Loren's museum in Portland, Maine.)

These are two different clubs, both named Warlocks. One club wears a harpy on the back patch, the other club wears a phoenix. The two clubs are from different parts of the US. Just FYI.