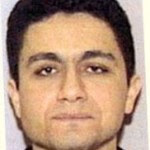 The mystery of what Mohammed Atta was doing in Portland, Maine, on 9/10/2001 has been compounded by the disappearance of most of the locations that Atta visited that last evening of his life. 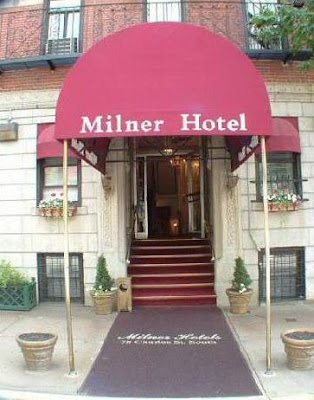 As you may recall, Atta on September 10, 2001, picked up another 9/11 terrorist, Abdul-Azzia Al-Omari (or Alomari), at the Milner Hotel (78 Charles Street South) in Boston. 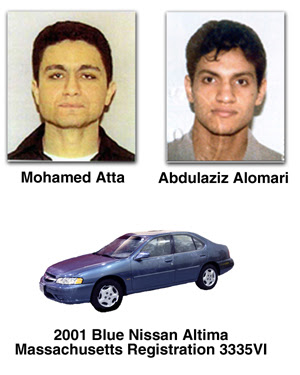 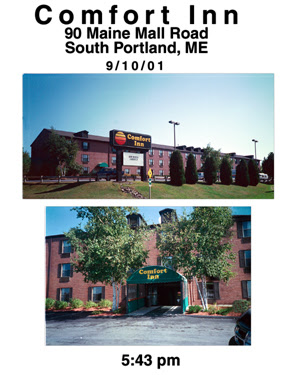 Financial records and bank video show Atta and Al-Omari made two ATM withdrawals in Portland, and the men were reportedly spotted at an area Wal-Mart, allegedly purchasing box-cutters, as well as in the parking lot of a Pizza Hut restaurant. The ATM was down the road from the Comfort Inn, at a gasoline station in South Portland, and the local Wal-Mart was in Scarborough, a short 10 minute drive down that same road from their motel. 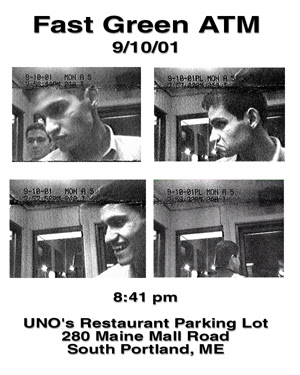 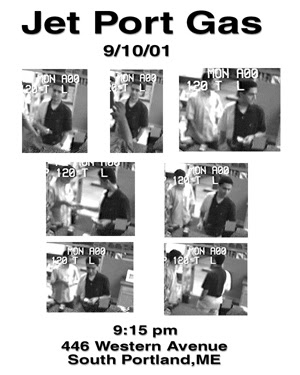 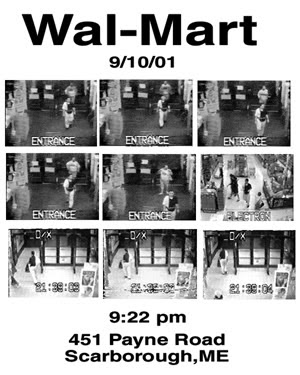 Specifically, a local article detailed their movements on September 10, 2001:

After checking in at the motel, Atta and Alomari were seen several times between 8 p.m. and 9:30 p.m. Between 8 and 9 p.m., they were seen at Pizza Hut; at 8:31 p.m., they were videotaped by a KeyBank automatic teller machine, and videotaped again at 8:41 p.m. at a Fast Green ATM next to Pizzeria Uno.

At 9:15 p.m., the two stopped at Jetport Gas on Western Avenue, where they asked for directions, and at 9:22 p.m., Atta was caught on videotape in the Wal-Mart in Scarborough. The FBI reports he spent about 20 minutes there. 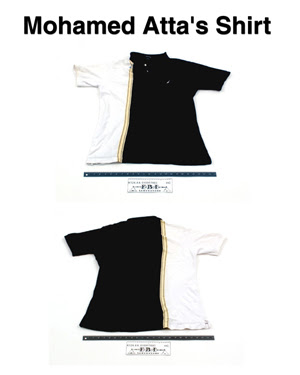 Also published was a ...

8: 41 p. m.: The suspects are photographed by a Fast GreenATM in the parking lot of Pizzera Uno restaurant, 280 Maine Mall Road.

In eleven years, businesses close, open, and close, of course. Intriguingly, the physical links to the visit to the Portland area of Atta and Al-Omari have, with the exception of the Comfort Inn, mostly vanished as separate entities or have been physically torn down.

One of the first to go was the Fast GreenATM. It was removed and a nearby gasoline station was torn down, soon after 9/11. Today, a jewelry store sits on the site.

The Key Bank driveup no longer exists, as it was in 2001. The Wal-Mart on Payne Road, Scarborough, closed, although other Wal-Marts continue successfully in the Portland area. The Pizza Hut is gone too.

The Comfort Inn remains, although there are various rumors that no one is allowed to check into Room 232, anymore, where Atta and Al-Omari stayed, or that the room number has been changed.

On the morning of 9/11, Atta and Al-Omari drove to Portland International Jetport (below) and boarded a 6 a.m. commuter flight to Boston's Logan International Airport. 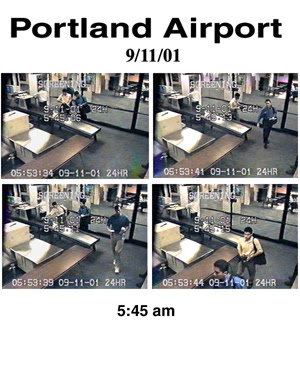 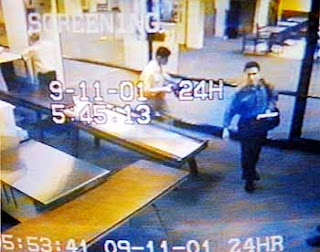 At Logan, they boarded American Airlines Flight 11 on a passenger plane, which, for them, would continue on to the World Trade Center's Twin Towers.

Even today, the reason behind Atta and Al-Omari being in Portland, Maine, remains a riddle.
Posted by Loren Coleman at 2:18 PM

Probably meaningless, but the license plate # on the MA tag: 3335VI:

Again, probably coincidence, but sorcery does place importance on numbers.

This is interesting. But can't you just go to the hotel and ask them about the room thing? That need not be hearsay. Have similar things happened elsewhere I wonder?

I live in the area where this all occurred. I was little when 9/11 happened but learned about it in school. The Walmart building still stands and a Mardens went in its place. About two years ago it moved across the street into a brand new building that was bigger so it was a Super Walmart! Pizza Hut along with every other business in the plaza were slowly demolished before and after the events of 9/11. Now nothing sits there and plans to build have always failed. The only plan I recall is moving the Best Buy from the mall to the lot. Pizza Hut now is serving customers in another building, next to the old Borders which is now Books a Million! The ATM at UNO's is still there but probably newer. I think the drive thru bank part has returned but I can't be sure!

"On the morning of 9/11, Atta and Al-Omari ... boarded a 6 a.m. commuter flight to Boston's Logan International Airport. "

That was a Colgan Air commuter flight. And it was on a Colgan aircraft that 911 widow Beverly Eckert, and critic of the official story, lost her life in the crash of Colgan 3407 near Buffalo on 2-12-09.

And now they too are gone, having recently declared bankruptcy.

The Comfort Inn remains, although there are various rumors that no one is allowed to check into Room 232, anymore, where Atta and Al-Omari stayed, or that the room number has been changed.

A strange rumour, as anon says above, someone should check it out in person. If I lived anywhere near, I would.

When I read that thing about the hotel room, I thought it sounded very Stephen King. Then I remembered that all this takes place in Maine ...

Well what's done is done. I hope the devil has a blowtorch poking up their ass as we speak.

They say that there is comfort in numbers, so perhaps we should take a synchromystic look at these Comfort Inn numbers. Atta and Alomari took Room 232 at the hotel located at 90 Maine Mall Road. 232 90 Th is the most abundant isotope of thorium, a radioactive element. Some skeptics of the official 9/11 storyline have noted that thorium was aberrantly discovered in dust samples taken in Manhattan after the WTC attacks, and have speculated that fission bombs were involved. Thorium was, of course, named after the Norse god Thor, and Brooklyn rapper Mighty Thor has a track called "911 WTC Memorial."

This is the first Tuesday 911 I recall noticing. The kind weather in the midatlatic brings the day back clearly. I feel 11 years is more significant than 10 with its mawkish anniversaries anyway.

Also, fighter jets have been flying over my house for 3 months. This never happened per 911 and hasn't happened since, til now.

@Anonymous 2:11:
I do believe this is the first Tuesday anniversary. And it is a marvelous day, weatherwise, here in NYC, just like in 2001. I usually read/do the Times x-word on my commute to Lower Manhattan, but today I just reflected. I expected jets to hit the nearly complete WTC building all over again. I