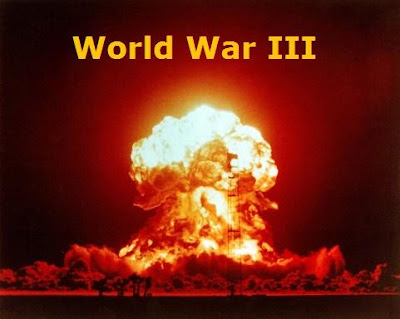 Okay, okay. No reason to go overboard. There is no need to think World War III is around the corner, despite what appears to be a blogosphere full of people seemingly hoping it is going to break out any day. Yes, really, that's what I see out there.

But, seriously, these are rough times, with many regional wildfire wars really to spark widespread chaos.

Of course, I have always found the worse hidden costs of our wars in Iraq and Afghanistan are the suicides of our returning soldiers - and less documented - the suicides of subcontractors - and the covert mass violence situations from both. But more on that some other day.

Is it going to stop soon? Not if you listen to the prophets of the web....

General Wesley Clark has detailed his story, several times, of being told of the seven countries that would be invaded in his near future:


Then there are the Biblical quotes to which people point, often: 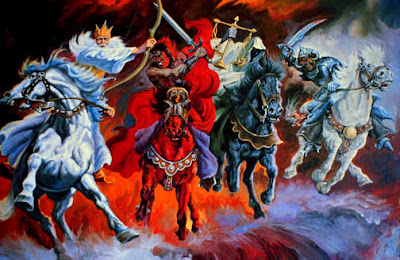 Then another horse came out, a fiery red one. Its rider was given power to take peace from the earth and to make men slay each other. To him was given a large sword.

And ye shall hear of wars and rumors of wars: see that ye be not troubled: for all these things must come to pass, but the end is not yet.

Others have had other ideas:

Map of World around Iran

In the Danube and of the Rhine will come to drink
The great Camel, not repenting it:
Those of the Rhône to tremble, and much more so
those of the Loire,
and near the Alps the Cock will ruin him. 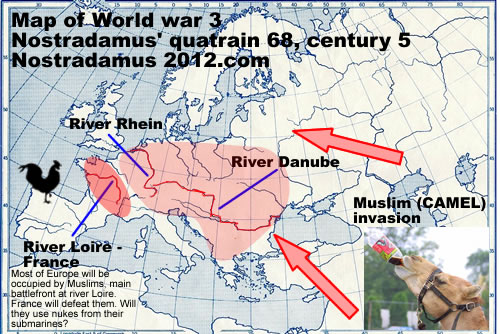 
Perhaps it is not that bad, but certainly, all the indicators are that...

Posted by Loren Coleman at 9:24 AM

I remind myself of the Olympics. Didn't almost everyone think SOMETHING was going to happen during the Olympics?

(Although there is the possibility that something bad really DID happen during the Olympics but it was SO bad that nobody is telling anybody about it.)

Or, the 'something' that did happen was a world wide Temple ceremony unmasked. That's something. In our face big.
Here's a show that goes with the 4 Horsemen: http://youtu.be/YEhsESJLbmQ

I don't agree with all of "End of the Age.TV" teachings, but a show of his did help motivate constructing this show. You might find the connections interesting.