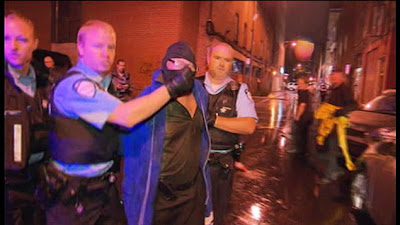 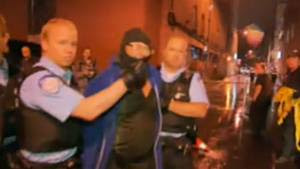 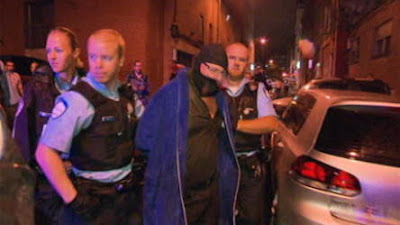 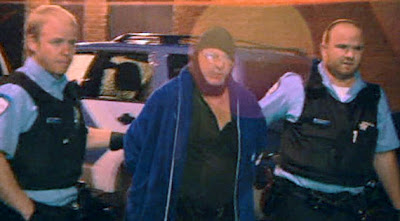 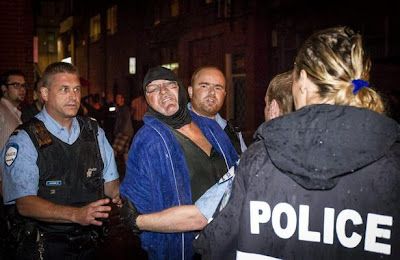 You can't make this up: The shooting suspect has been identified as Richard Henry Bain. Yes, Bain, like in Bain Capital, the company founded by Republican presidential candidate Mitt Romney. Bain, which sounds exactly like Bane, was discussed in depth before the appearance of the villain Bane in The Dark Knight Rises, which was shown at the July 20th midnight showing in the Aurora theater where the shooting occurred.

For my deeper dissection of Bane/Bain, please click here.

Richard Henry Bain now pops up as the suspect in this strange shooting in Quebec. 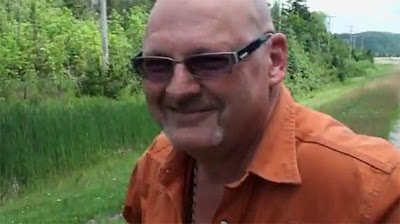 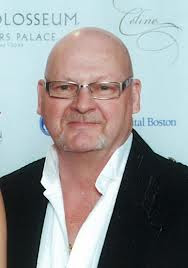 Was there an attempt on the life of the newly elected future premier, Pauline Marois of Quebec, on Tuesday, September 4, 2012? 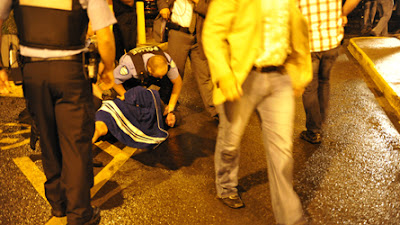 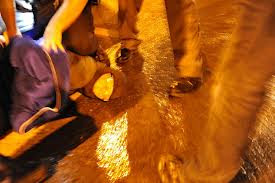 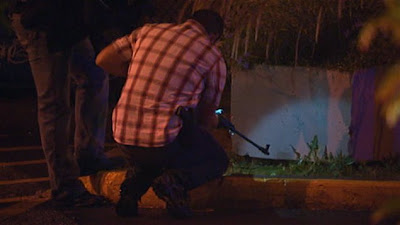 An undercover security unit officer is shown in plaid. For more on how plaid showed up in Aurora, in the guise of the mysterious "second gunman" candidate, click here. 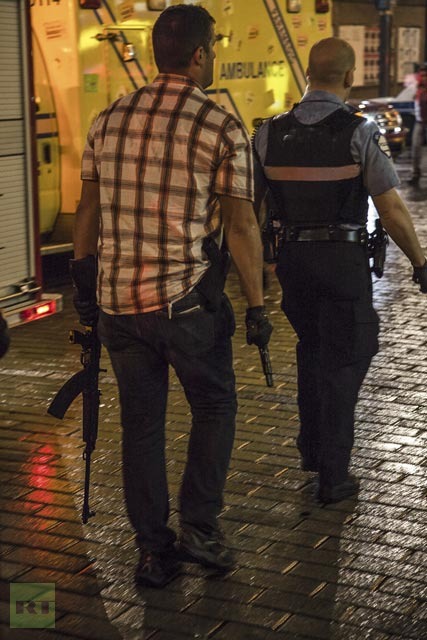 Voting had just returned the Parti Québécois to power Tuesday. A rally celebrating the Marois (Marios = "dweller at or near a marsh") victory in the historic Quebec election ended in tragedy.  Several shoots erupted from a rifle held by a masked gunman, which resulted in one person killed and another wounded. The gunfire began after an apparent diversion fire was set at the back of the crowded Montreal concert hall, where PQ Leader Pauline Marois was celebrating her minority mandate.

The name of the location of the shooting, The Metropolis, reminded me of 1927 German expressionist science-fiction film by the same name, directed by Fritz Lang. 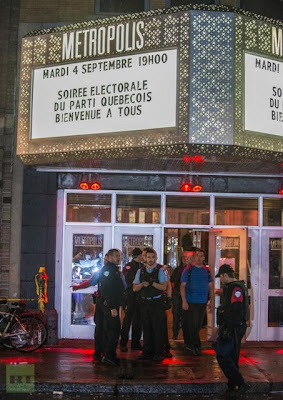 One shooting victim, a 45-year-old man, later died, while another person wounded in the shooting was out of danger. A third person was in hospital, recovering from shock. 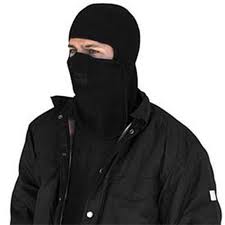 The balaclava is also called a a Templar cap.

A large 62-year-old man (shown at top) wearing a black balaclava, black shirt, glasses, shorts, and what was described as a blue bathrobe or housecoat was arrested. The suspect reportedly spoke French with an accent. His two firearms were seized. (On Tuesday, he was named as Richard Henry Bain.) 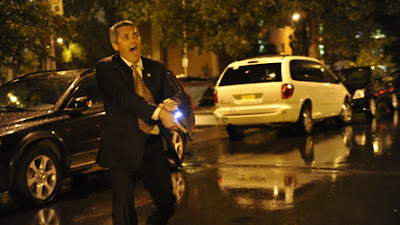 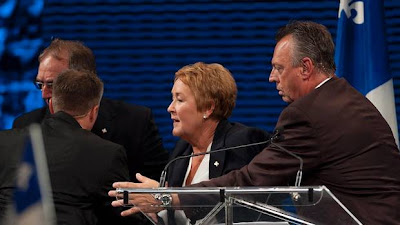 Parti Québécois Leader Pauline Marois is rushed from the stage by her security team as shooting began as she started to speak to supporters in Montreal on September 4, 2012. 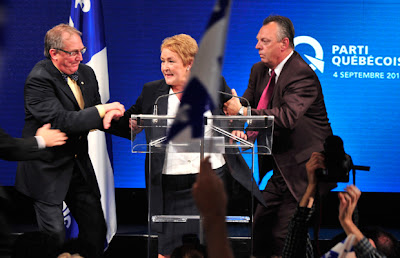 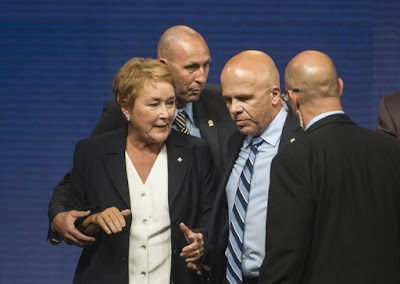 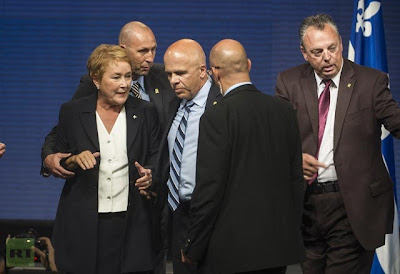 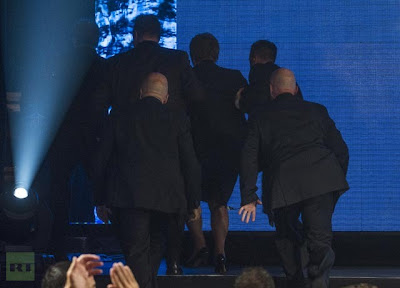 After defeating the Liberals, Marois, 63, who had been severely criticized for campaigning on identity and language themes, had some conciliatory words for Quebec's anglophone and native communities, speaking of their shared history. In a rare move for her, Marois spoke in English to say their rights would be respected.

Nevertheless, she struck a tougher stance towards the rest of Canada, hinting of the future struggle for separation on the horizon.

"As a nation, we want to take ourselves the decisions that affect us. We want a country. And we'll have it."

Marois, however, has said she will only hold a third referendum on independence if a win is assured, which is unlikely, given that barely one in three Quebecers currently support secession.

The party's victory came after allegations of corruption and months of nightly student protests over a planned tuition hike, with polls showing widespread dissatisfaction with nine years of Liberal rule.

The masked Quebec shooting occurred near an anniversary involving other men wearing masks. 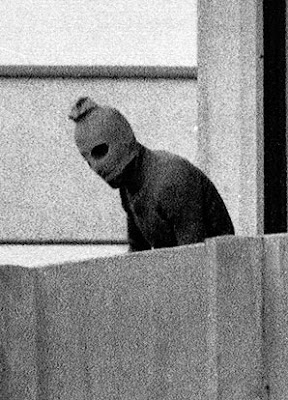 At 4:30 a.m., on September 5, 1972, a dozen masked, armed Palestinians of the group calling itself Black September, with the assistance of German neo-Nazis, stormed the Olympic Village, taking Israeli athletes and coaches hostage. The end of the situation on September 6th resulted in the deaths of 6 Israeli coaches, 5 Israeli athletes, 5 members of Black September, and one West German police officer. Photo: Kurt Strumpf
Posted by Loren Coleman at 7:56 AM

If your titular question gets an affirmative answer, it would seem to represent the inception of an especially dangerous meme, copycat-wise.

"Metropolis" has interesting resonances. There's the old sf film Loren mentions. But in the modern world, Metropolis is from the Superman mythos and was strongly featured in the TV show Smallville. Metropolis was always the big city urban decadance contrasted against the rural small town of Smallville. Crime and corruption was almost always centered in Metropolis. If "Metropolis" tags this as a Superman allusion, now there have been Batman and Superman shootings.

Very true. Metropolis can also be a stand-in for Gotham. Gotham is very corrupt, hence the birth and need of the Batman.
In Batman Begins Al' Gul wanted to wipe out Gotham specifically because of its decadence, as his organization had done to Rome and various other empires to make the world "right" again.
In The Dark Knight Rises, you have Bane (Richard Henry Bain), trying to complete destruction.
So Bane in Canada, and a Joker in the States.

The Joker has green hair, not orange, the mixing of the two joker=orange hair is nothing but MSM deception and confusion, the question remains why?

'Bane' from the old ENGLISH 'bana': a thing that causes death.