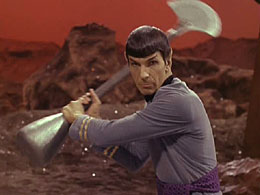 Will this Summer of the Gun 2012 end during this Fall, or will the mass shootings spread to school and related violence in other countries in Europe, Asia, and Australia? Are people "running amok"?

In the wake of the new killings outbreak in Alabama in 2009, I was asked: "When people 'run amok' in Malaysia and Indonesia does it happen in clusters or cyclically?" 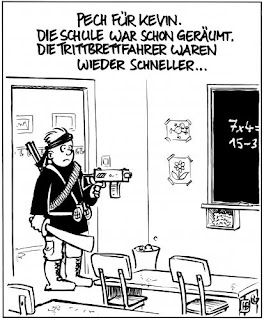 The Amok "cartoon" can be translated as "'Kevin was out of luck: The school was already evacuated. The copycats were faster again…'"
The biting humor in this image illustrates a coincidence of name and reality.

"Running amok" (derived from the Malay word amuk, meaning "mad with rage") is as much a product of the copycat effect, as any other language's similar behaviors. The word was made popular by the colonial tales of Rudyard Kipling (an important Freemason writer whom I discussed once at this blog in conjunction with Slumdog Millionaire).

Star Trek even science-fictionized the concept in the episode "Amok Time" in which Vulcans are said to have periods of irrational behavior. (This episode turned out to be culturally significant, also, for the widely repeated Vulcan hand signal used by Spock, was used for the first time on this episode.)

"Running amok" is merely a culturally-framed phrase to attempt to describe the underlying suicidal behavior that is viewed as a "murder-suicide rampage" today.

For example, here is how Wikipedia approached this topic in 2009:


Behaviour strongly reminiscent of amok is also found in Western societies, and indeed the term is often used to refer to the behaviour of someone who, in the grip of strong emotion, obtains a weapon and begins attacking people indiscriminately, often with multiple fatalities. The slang term going postal is similar in intent and more common today, particularly in North America. Police describe such an event as a killing spree. If the individual is seeking death an alternate method is often suicide by cop.

In contemporary Indonesia, the term amok (amuk) generally refers not to individual violence, but to apparently frenzied violence by mobs. Indonesians now commonly use the term 'mata gelap' (literally 'darkened eyes') to refer to individual amok.

Norse berserkers and the Zulu battle trance are two other examples of the tendency of certain groups to work themselves up into a killing frenzy. 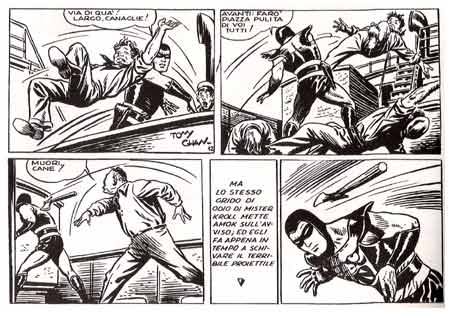 
Though so intimately associated with the Malay there is some ground for believing the word to have an Indian origin, and the act is certainly far from unknown in Indian history. Some notable cases have occurred among the Rajputs. Thus, in 1634, the eldest son of the raja of Jodhpur ran amok at the court of Shah Jahan, failing in his attack on the emperor, but killing five of his officials. During the 18th century, again, at Hyderabad (Sind), two envoys, sent by the Jodhpur chief in regard to a quarrel between the two states, stabbed the prince and twenty-six of his suite before they themselves fell.

All of these behaviors, whether of school shootings, going postal, workplace violence, church/temple shootings, rampage killings, or running amok, have usually been all about suicide.

Even the Wikipedia writer agrees:
"Amok episodes of this kind normally end with the attacker being killed by bystanders, or committing suicide."

"Some observers have related this explanation to Islam's ban on suicide, which, it is suggested, drove Malay men to create circumstances in which others would kill them."

Amok is "in fact, the Malay equivalent of suicide."

To ask for firm answers about "amok" is to try to understand the essence of suicide, which, of course, is one of the most mysterious topics about humans that exists.

Looney Tunes' 'Duck Amuck', directed in 1953 by the legendary Chuck Jones, is arguably one of the top ten animation shorts of all time.

The surreality caused by the explicit breaking of the 4th wall, while we follow Daffy's desperate attempts to 'stay in character' and adapt to the ever-changing background, is a disturbing reminder that often times our lives and behavior are governed by powerful forces that escape our control, and even our understanding.

Sometimes God is a true stinker :3

You know, Loren, as I ponder the Trek episode you mention ( one of my favorites of the original series ) I think your explanation of Amok actually being a suicide attempt is relevant, and even more poignant in the context of the series. During the battle that follows Pon Far ( the blood fever ) two Vulcan males enter their own sort of battle trance, and struggle with all their might to kill the other. It is a battle to the death. The victor takes the wife. The loser forfeits his life. And that seems as it should be. A Vulcan's pride is his Logic - once that is stripped from him, how could he bear to live if he hasn't won a wife? For the Vulcan, death without Logic must seem preferable to a life without either it or a female. Fascinating...