As we travel into the new darkness being revealed in 2012, we should not forget the reality of beheadings in the background of the Batman blackness. 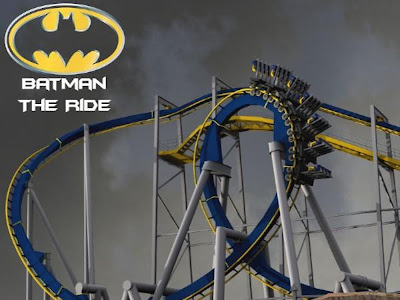 On Saturday, June 28, 2008, at Six Flags Over Georgia, 17-year-old Asia Leeshawn Ferguson of Springfield, South Carolina, scaled two six-foot fences and passed through restricted areas posted as dangerous to visitors. Ferguson jumped the fences and was then decapitated by the Batman roller coaster. 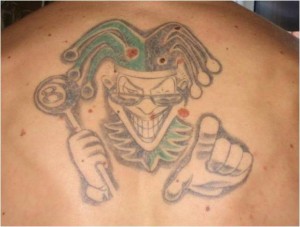 Tim McLean's tatoo.
It should not be lost on people that the victim of the Canadian bus beheading (July 30, 2008) was a young man who told his friends he "loved being a carny," who sported the Joker-like tattoo (above) on his back. Tim McLean was headed to Winnipeg after working with the carnival in Edmonton, Alberta. His links to Joker/clowns/Jokawild and more were discussed, in depth, here.

It was only a matter of time until the mainstream media would catch on to this "curse." People have been mumbling about it since Heath Ledger died. As those watching for the curse of threes have noticed, Ledger died, Christian Bale was arrested and then Morgan Freeman has been in a tragic car crash.

The Dark Knight is dedicated to both the 28-year-old Ledger, who died of an accidental overdose last Jan. 22, and Conway Wickliffe, 41, a stunt supervisor who died in a freak accident in London while setting up a car crash.

Blogger Todd Campbell, after he read an early sharing of these thoughts, forwarded the following photographs to my attention, from the movie. He posted on this, as well, in 2008.

Embedded within the movie was the Heath Ledger character, the Joker, using the Joker/Death card as his "business calling card," as pictured, shown holding a decapitated head.

Schaefer wrote that The Dark Knight joined a grim list of "cursed" films. Most people are familiar with them.

In June 2007, a teenager's legs were severed when cables snapped on the Superman  Tower of Power ride at Six Flags Kentucky Kingdom in Louisville, Kentucky.


The 1982 horror classic Poltergeist was haunted by the premature deaths of two of its female stars. Vanity Fair celebrity scribe Dominick Dunne's daughter Dominique was murdered by her live-in lover soon after the film was finished. Heather O'Rourke, the film's child star, died in 1988 at age 12 of cardiopulmonary arrest prompted by Crohn's disease. For all of its sensationalism, in the end, the Poltergeist curse only documents four deaths.

I have written of the "Mothman Death Curse" online and specifically in the August 2004 issue of Fortean Times, with a list of over 80-related deaths, some of surprisingly young people and others of elder members of the crew, cast, and aligned associates of the film, in West Virginia and elsewhere.

On Wednesday, January 21, 2009, (a year after Heath Ledger's death) police reported a woman was slain on the Virginia Tech campus and decapitated. Xin Yang, 22, was killed after arriving at the campus from Beijing on January 8 to begin studying accounting, Virginia Tech Police Chief Wendell Flinchum said.

The first 911 call came into police around 7:06 p.m., saying a woman was being assaulted inside the Graduate Life Center, just outside the Au Bon Pain cafe.

A police officer who responded to an emergency call has told how she entered the cafe to find the male attacker holding the female victim's head in his hand. Police say the victim was decapitated with a kitchen knife while having coffee at the cafe with the suspect.

Responding officers found the woman had been stabbed to death and beheaded. They arrested the suspect, a 25-year-old Chinese graduate student named Haiyang Zhu. He is a Ph.D. student in agricultural and applied economics. The police also recovered a large kitchen knife they believe was used at the scene.

Haiyang Zhu was charged with first-degree murder and is being held in Montgomery County jail.

The Au Bon Pain decapitation was the first violence on the VA Tech campus since April 16, 2007, when Korean student Seung-Hui Cho killed two students at West Ambler Johnston Hall, and then two hours later, after walking across campus to Norris Hall, killed 30 others and himself.

From Batman to Mothman, whether or not there are curses is not important. As the spectre of decapitations grows in the Mideast, we need to be aware. The fact that they have become part of popular culture and that there is a dark sense that there may be such things in the modern world, in the end, may be what becomes more significant. If they are foreshadowing other storms, dawns, and wicked things coming this way remains to be seen. 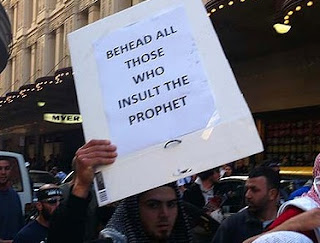 I subscribe to two newsletters about the drug cartels in Mexico. Besides the gruesome pictures, they occasionally include actual videos of beheadings (and the cutting up of bodies). At first they were hard to watch, but I've almost become immune to them, though always stunned at the depravity.

I don't know what humanity is coming to that they take these things in stride in popular culture.

The movie playing on the bus with the McLean killing was eerie too.

This “head” business seems to be a key for some people who look for a guiding order to the seeming chaos of the episodes coming at us nowadays. To the very limited extent that I understand this view of the head as a key, it goes to the whole “alpha” and “omega” thing. At the very start of time—for us, for our cosmos—the Judeo-Christian scripture says there was a prophecy from God Himself, apparently speaking to Satan himself in the guise of the serpent of Eden, “You are cursed more than all cattle/And more than every beast of the field;/On your belly you shall go,/And you shall eat dust/All the days of your life./And I will put enmity/Between you and the woman,/And between your seed and her Seed;/He shall bruise your head,/And you shall bruise His heel.” And at the very end of time for us, for our cosmos, Satan will create a counterfeit or parody of this: “The dragon gave him his power, his throne, and great authority. And I saw one of his heads as if it had been mortally wounded, and his deadly wound was healed. And all the world marveled and followed the beast.”

The theory as I understand it is that nowadays 1) we are in these very end times where these head-related events will be coming true and the events are being foreshadowed; or 2) we are being manipulated by people with vast resources to believe that these events are coming true so they can create political and economic power for themselves; or 3) we are in the end times for real AND people are faking things to maintain their own pretense at control.

The Dark Knight made me think of MacBeth, for the play's bad luck to actors who mention it by name.

"ROSS
Ha, good father,
Thou seest the heavens, as troubled with man’s act,
Threatens his bloody stage. By th' clock ’tis day,
And yet dark night strangles the travelling lamp.
Is ’t night’s predominance or the day’s shame
That darkness does the face of Earth entomb
When living light should kiss it?"

These lines seemed resonant [ though not directly with beheadings ].

Macbeth is without doubt a dark knight.

MacBeth as "son of the house" = Isaac, man of smooth skin, trained at and under his mother's robes. He costumes himself and tricks his Paps into the brithright or the stick/scepter. The text, when aright read, says his father knows = mercury is there as well.

"Iron may melt but it will writhe in itself..."

The broken Spotswood in 5 reveals the game of Samael.

Does anyone remember the curse of Bruce Lee's family?

His son Brandon invoked the same joker/face painted character in The Crow and died tragically.

I wonder what links/syncs the Dark Knight and The Crow share.

It is said that the cryptid known as "Mothman" was given that name by a reporter who was a fan of the old Batman show.