"Assassination" in the Alps: Israeli Hit? 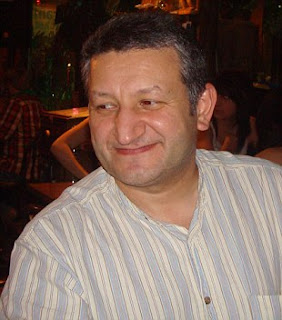 British police were said to have spent several weeks tracking the movements of Saad Al-Hilli at the start of the last Gulf War. Saad Al-Hilli's apparent family links to Saddam Hussein's ruling Ba'ath party in Iraq may be of significance. Daily Mail. 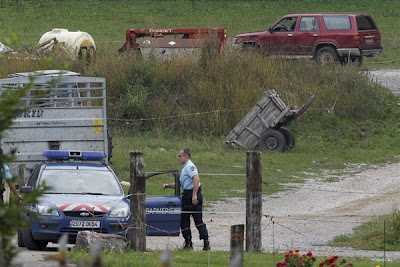 Saad al-Hilli has been identified as one of four victims shot in the Alps. He is a British man, born in Baghdad, Iraq, in 1962. Investigators reported that the man is a resident of the London suburb of Claygate, said Sipa News on Thursday morning.

Several media sources by the end of Thursday are saying Saad al-Hilli was working with the Iranian government on developing the nuclear facilities in Iran, and he and his family were killed by Israelis (Mossad?). The Telegraph noted he worked for a satellite and aerospace tech company attached to Surrey University. Other sources are saying al-Hilli
worked on the Iraqi nuclear program before moving to the UK and was under protection from MI5 against the Israelis.


In a shocking development revealed Wednesday night, a four-year-old girl crawled out from under the dead bodies in the car and walked smiling into the arms of forensic investigators. Immobilized with fear, the young British girl huddled for eight hours beneath the legs of her slain mother in the back of a car filled with corpses on a remote Alpine road. All victims in the car were apparently relatives. 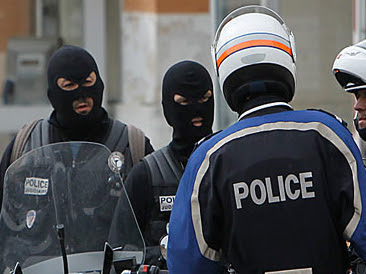 The Annecy Lake investigators shown are French police in balaclavas.

Five people, including a young girl, have been shot in a forest in the Alps, French authorities said. Four are dead.
Reports from the scene said the bodies were riddled with bullets. Police are calling it an "assassination," reported Fox News.
All five were initially reported to be dead, but the girl, believed to be around 7 years old, is now reported to be in critical condition in a hospital, according to a local prosecutor.
An official with the regional administration for the Haute-Savoie region says three of the bodies were found in a BMW with British registration.
Sipa News says the girl was found alive with bullet wounds on a forest road.

It happened in an Alpine forest near Chevaline, close by the Annecy (English: Anne, Annex) Lake, in Haute-Savoie (English: Upper Savoy). 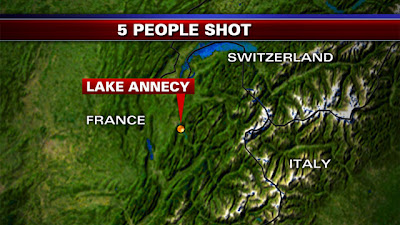 (Chevaline, meaning "of or relating to horses," was the code name for a project to improve the penetrability of the warheads used by the British Polaris nuclear weapons system. Devised as an answer to the improved Soviet defenses around Moscow, the system was intended to increase the probability that at least one warhead would penetrate the city's anti-ballistic missile - ABM - defenses.)

The initial reports said a cyclist discovered the girl, the three bodies in the car and a fourth body, of a cyclist, lying nearby.
The Annecy prosecutor Eric Maillaud said the discovery was like a scene from a film: "We don't know who could have done this. We have no idea."

The Haute-Savoie was one of the filming locations for the 2010 film directed by Clint Eastwood, Hereafter. The 2000 French psychological thriller about a murder investigation, The Crimson Rivers, directed by Mathieu Kassovitz, was also filmed in the area.

Maillaud added that the victims were "found very shortly after the shootings."
No details of the ages or nationality of the victims were released by the French police. Maillaud said: "The car is an English car, we are sure of that, but we don't know their nationality. It is not possible to move the people before tomorrow [Thursday] morning. We don't have access to documents to know who the people are."
A police spokesman told the Mirror: "From the registration we believe this family may have been British."
Sky News reported that another cyclist found the bodies. That cyclist is in shock.
The identity of the victims is unclear. 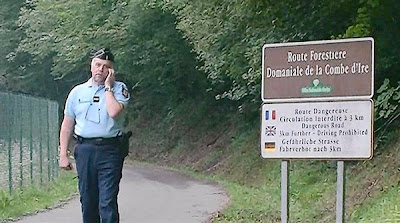 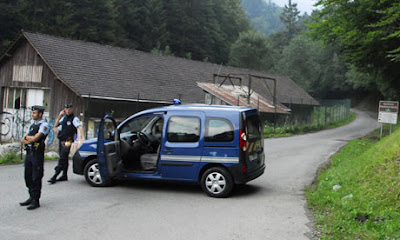 French gendarmes block a road leading to the scene of the shooting near Lake Annecy. Photograph: Jean-Pierre Clatot.

A shooting in Quebec and more shooting in France. Assassination attempts. This has happened before. I have no idea if there are connections or relations here, but check out the Wikipedia page for:

Order of the Solar Temple

In 1952, the Drummond family was killed as they were on holiday in France, in the Basses-Alpes region:
http://en.wikipedia.org/wiki/Jack_Drummond

Hey! Is this like one of those jokes that's funny because you believe it's true even when it's horribly ironically BAD?

Or is there a reason the UN loves actors and visa versa?

Meaningful coincidence?
Perhaps not all by itself.

This French Alps shooting comes on the heels of the shooting in the french Canadian city of Montreal.

Richard Henry BAIN was identified as the shooter at the Pauline Marois victory speech.

Coleman, so impressed with your latest turn in the work I've got to ask that although you've mentioned the copy cat effect as not needing our gov's participation....

Is this not what Kennedy was being asked to implement? Via the UN?

This case reeks of involvement of the intelligence agencies.

And I am never surprised to see the arms of the state linked into ritualistic and symbolic happenings, as well.

Very good detail in this post, and I would add, it is reported that the cyclist who found the bodies and saved the wounded girl is an ex-member of the British RAF. Yes, he just happened along ... by coincidence ...

Also, the French authorities are getting some criticisms for their "bungling" in two aspects. The wounded girl was officially announced to be dead - until journalists found out that she had been rushed to hospital. The other girl was said to have been undetected, hiding in the car, for 8 hours, and only found now.

It is possible that these "mistakes" were a pretence, to try to protect these living witnesses. It is safer for them if they are believed dead. They are now under armed guard, and need to be. They are in great danger.

I wonder if these victims were the inadvertent and unlucky witnesses to a criminal, terrorist, or intelligence activity; killed just because of what they saw.

Since we don't have firsthand information about the facts of the case (everything we "know" is just hearsay), we currently can't characterize the dead as guilty of anything other than being in the wrong place at the wrong time.

Just so you know the media hates Jews and blames us for everything. Dont always believe Europeans because they are most of the anti-Semitic population of this planet.