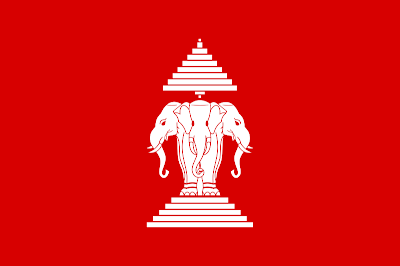 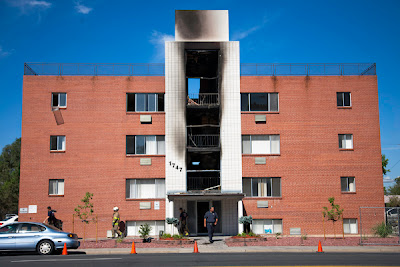 Who mysteriously started Monday's fatal fire at this Aurora complex?

Look similar to the following building? Why? 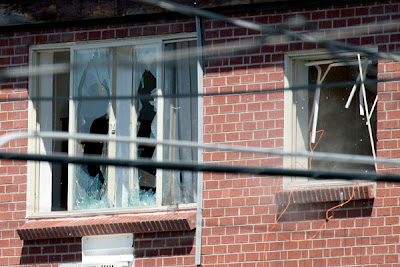 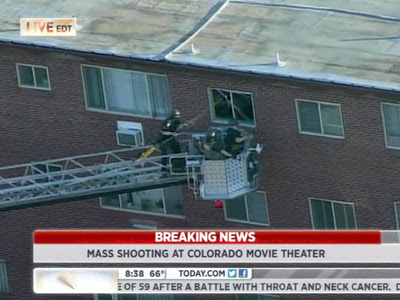 James Eagan Holmes' apartment was located at Paris Street and 17th Avenue in North Aurora, Colorado, next to the Anschutz Medical Campus. Due to the television cameras watching the law enforcement operations dismantling booby-traps in the place after The Dark Knight Rises shooting, we know what it looks like (above).

Now, in a complex that looks quite like it, there was an arson fire that killed two people. Here's the location of the August 6, 2012, intentionally set fire: 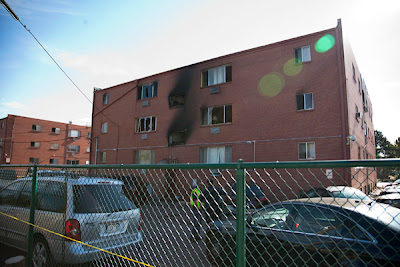 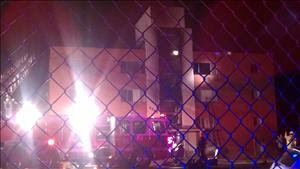 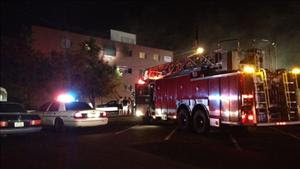 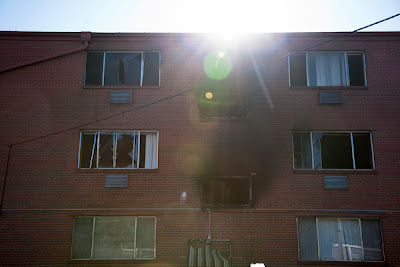 The site is described as a four-story building across Peoria Street from the Anschutz Medical Campus, at the same intersection as the home of suspected killer James Holmes. The building is at East 17th Avenue and Peoria, less than 100 yards from the apartment building where Holmes lived before his arrest for the July 20th movie theater massacre.

Aurora fire officials are investigating the Monday apartment blaze that left two dead and 25 people injured as a possible arson.

When fire crews arrived, they found a building already engulfed in flames with some residents hanging from their windows to escape the flames. Aurora fire Captain Al Robnett said investigators received a report of someone fleeing the scene with a gas can and are investigating. But, Robnett said, investigators have not yet determined how the fire at the Fitz Apartments started or where it started.


Crews immediately started fighting the flames while others used ladders to rescue several people from their windows. In all, 25 people were in hurt, Robnett said, and 14 were rushed to area hospitals. Two people died from their injuries.

Robnett said the two people who died were on the building’s fourth floor. It’s not clear yet whether the victims were adults or children. Those who were injured were being treated for broken bones and smoke inhalation.

Autopsies for the two people who died have not yet been scheduled, according to the Adams County coroner’s office.

No firefighters were injured, Robnett said, and 16 fire department vehicles responded to the blaze.

The Red Cross Mile High Chapter set up a shelter for the building’s residents at nearby Paris Elementary School. The blaze forced the evacuation of not only 24 units in the building that burned, but also 22 in an adjacent building, the Red Cross said.

Despite how close the arson was to Holmes' apartment, Fire Captain Robnett told the media there's nothing to indicate a connection with the shooting.

Updates: Some answers....what do they mean?

A shooting in Aurora Tuesday afternoon left two people wounded. The injuries appear to be non-life threatening, according to police. The shooting occurred near East Colfax Avenue and North Kingston Street a little before 4:15 p.m.

A Laotian couple was killed in the Aurora apartment fire Monday night 9NEWS has noted.

Bo Thammavongsa, 59, and his wife Dom Chanthavongsa, 65, never made out of apartment 404. Bo's stepbrother Kim Apaseuth had dinner with the couple at their apartment and watched the Olympics a few hours before the fire."And [police] come knock on the door," Apaseuth said. "They told me your brother passed away and your sister-in-law. I'm very sad."
Apaseuth was the couple's only family in Aurora, and he saw them almost every day for 15 years."God, I can't believe it," he said. "Yesterday we talked, ate, had fun. We watched the game together."

Apaseuth says Bo was a Laotian veteran, now a custodian for Aurora public schools. He and his wife were married for 30 years. Bo and Dom came to the U.S. from Laos more than three decades ago. (9news.com)

At top is the flag of Laos, which was used from 1952 until the fall of the royal government in 1975. Laos' red flag then showed a white three-headed elephant (the god Erawan) in the middle.

Erawan is the Thai name of the mythological elephant Airavata, a mythological white elephant who carries the Hindu god Indra. It is also called Ardha-Matanga, meaning "elephant of the clouds"; Naga-malla, meaning "the fighting elephant"; and Arkasodara, meaning "brother of the Sun." Erawan/Airavata is depicted as a huge elephant with either three or sometimes thirty-three heads which are often shown with more than two tusks.

Posted by Loren Coleman at 8:27 PM

— n
1.a rare albino or pale grey variety of the Indian elephant, regarded as sacred in parts of S Asia
2.a possession that is unwanted by its owner

4.a rare or valuable possession the upkeep of which is very expensive

You haven't used it in this article but I've noticed you've used the "there's a storm coming" phrase (Catwoman's line?) quite frequently recently.

This has thrown up another one of these 'coincidences' we all like.

Over here in the UK, the BBC is the exclusive channel for the Olympics. They have been frequently running an ad for the east London set soap opera 'Eastenders' in between events. In this ad the phrase "there's one heck of a storm coming" is used. Here's the ad below:

The games are based primarily in east London, just like the soap. The ad shows the streets in which it is set being hit by a storm with a tornado ripping up the streets.

Just thought I'd add this in case anyone is interested.

Meanwhile NYC police tie two homicides to shooter who may be using 'numerology' to pick his victims.

And in Austin,TX 6 homeless people killed by unknown assailant/s...but it 'may just be a coincidence'. (not a serial killer)

I thought detectives weren't supposed to believe in coincidences...

It's now been reported that witnesses also saw a man pouring gasoline in the hallway, and said that he fled the scene. Surveillance video and scanner traffic documented a possible suspect. He is a white male with a shaved head who appears to be in his twenties. He was wearing a black and white checkered shirt, which is a Masonic pattern. The 'shaved head' could indicate a connection to the prison system, the neo-Nazi movement, a gang of some sort, or the U.S. military.

The building owner reported off-camera to Channel 7 that he believed the fire was set by a 'copycat' inspired by Holmes' booby-trapped apartment. However, authorities continue to stress that they see no connection between the fire and the massacre.

"Now, most of the tenants who live in this 23-unit apartment building are students. We are told they go to classes on the Anschutz campus across the street."
http://www.youtube.com/watch?v=SRBPXAHW760

Anschutz Medical Campus was built on the grounds of Fitzsimons Army Hospital and it was paid for with a $91 million donation from Phil Anschutz, a neoconservative, evangelical multi-billionaire. Anschutz has his hands deep in petroleum, sports, railroads, and the media. He is the owner of the Weekly Standard, a neoconservative newspaper edited by Bill Kristol, co-founder of the Project for a New American Century (PNAC) and son of the 'godfather of neoconservatism' (Irving Kristol). Anschutz was a financial backer of George W. Bush.

While attending Anschutz, Holmes was mentally "treated" by Dr. Lynne Fenton, director of student mental health services on campus. From 1990 to 1993, Dr. Fenton was the Chief of Physical Medicine for the U.S. Air Force in San Antonio, Texas, and a staff physiatrist at the Wilford-Hall Air Force Medical Center. She received a Medal of Commendation from the Air Force in 1993. San Antonio has the largest Air Force presence of any city in America, so her position with the military was no obscure one.

This fire was likely a professional hit aimed at students at Anschutz who knew a little too much.