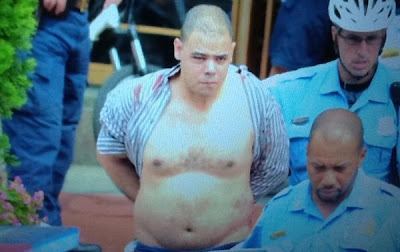 Update: The alleged shooter is arrested. He is identified as Floyd Lee Corkins II, 28.
See the end of this posting for more. 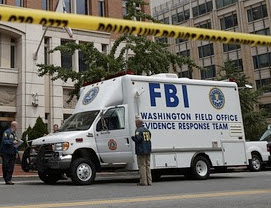 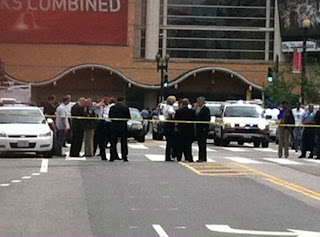 
A security guard at the Family Research Council [FRC] was shot and wounded Wednesday morning after a scuffle in the lobby of the group’s headquarters in downtown Washington, authorities said. D.C. Police Chief Cathy Lanier said the shooter walked into the lobby of the building at about 10:45 and was confronted by the security guard as if the guard were asking him where he was going. The man then took out a gun and opened fire on the guard, Lanier said. The guard and others wrestled the man to the ground, disarmed him and waited for police, she said. The guard was then taken to the hospital and is in stable condition, the chief said. FBI officials said the guard was shot in the arm. The shooter is in FBI custody and has not yet been charged, authorities said.

“The security guard here is a hero, as far as I’m concerned,” Lanier said. ”He did his job. The person never made it past the front.”

The Family Research Council is a conservative organization that deals in issues of faith, family and freedom, according to its Web site. The site says the organization is against abortion and euthanasia and considers homosexuality to be a sin. 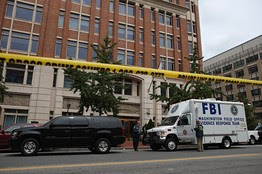 The Wall Street Journal reported, in part, on the reaction of the FRC leadership:

Family Research Council President Tony Perkins said, "Our first concern is with our colleague who was shot today. Our concern is for him and his family."

The council was recently in the news when Mr. Perkins defended the chief executive of restaurant chain Chick-Fil-A, who made comments critical of gay marriage. "All Chick-Fil-A did was refuse to be bullied by the politically correct crowd," Mr. Perkins said in a radio commentary.

The shooter has been identified as Floyd Lee Corkins II, 28.

Legal Insurrection has this info:

It has just been confirmed that Family Research Council shooting suspect Floyd Corkins II had been volunteering at the DC Center for the LGBT Community for the past six months.


David Mariner is executive director of The DC Center for the LGBT Community. He says Corkins had been volunteering at the center for about the past 6 months. Mariner describes Corkins as “kind, gentle and unassuming.”

Corkins, in his late 20s, is the suspect in the shooting that occurred in the lobby of the Family Research Council headquarters in downtown Washington, D.C., Wednesday morning. According to law enforcement officials, Corkins made negative comments about the FRC prior to shooting security guard Leo Johnson in the arm. Corkins also reportedly had a Chick-fil-A bag with him at the time.

Riehl World View points to the Facebook page for a Floyd Corkins II, who claims to have studied at George Mason. On it, he lists only two friends, one being a David Mariner.

Andrew Griffin of Red Dirt Report emails me that Floyd Corkins II has "had some esoteric interests (Bobby Beausoleil, La Jette, etc.) and was at Andrews AFB."

It is almost as if "Soleil" is a "trigger" word, as seen via his electronic footprints, and may have kicked in via external timing events recently. First, there is the death of Chris Marker (the Sans Soleil filmmaker) on July 29, 2012 - Corkins' favorite. Then Cirque de Soleil is to open Totem in DC on August 16th!!


+++
This shooting has become extremely politicized.

The site Queerty notes that...


...a number of LGBT organizations—including GLAAD, GLSEN, the Human Rights Campaign and the National Center for Transgender Equality—released a joint statement regarding the shooting:


We were saddened to hear news of the shooting this morning at the offices of the Family Research Council. Our hearts go out to the shooting victim, his family, and his co-workers.
The motivation and circumstances behind today’s tragedy are still unknown, but regardless of what emerges as the reason for this shooting, we utterly reject and condemn such violence. We wish for a swift and complete recovery for the victim of this terrible incident.

Federal authorities are treating the incident as a case of domestic terrorism. This is the fourth shooting in as many weeks that’s captured the nation’s attention, following the Dark Knight shootings in Aurora, Colorado, on July 20; a mass shooting at Sikh temple in Oak Creek, Wisconsin, on August 5; and 30-minute gunfight at Texas A&M University on Monday.

The LCD [ Lowest Common Denominator , not the LOren Coleman Denominator : ) ] seems to be Young , white males who appear to be the default Lonegunman , as well as default serial-killers.

There'll doubtless be a study by the SPLC [ or other 'paid to be divisive organ] titled ' Are young White Males more prone to random killings - should they be imprisoned from birth?' etc garble garble, paycheck , thanks _ plus a percentage of the follow-up Hollywood films