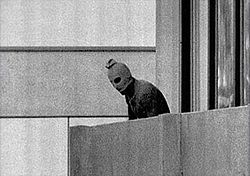 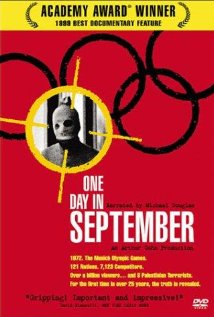 
The Munich massacre is an informal name for an attack that occurred during the 1972 Summer Olympics in Munich, Bavaria, in southern West Germany, when members of the Israeli Olympic team were taken hostage and eventually killed by the Palestinian group Black September. Shortly after the crisis began, they demanded the release of 234 prisoners held in Israeli jails, and the release of the founders (Andreas Baader and Ulrike Meinhof) of the German Red Army Faction, who were held in German prisons. Black September called the operation "Ikrit and Biram," after two Christian Palestinian villages whose inhabitants were expelled by the Haganah in 1948.

The attackers, who were given logistical assistance by German neo-Nazis, killed eleven Israeli athletes and coaches and a West German police officer. Five of the eight members of Black September were killed by police officers during a failed rescue attempt. The three surviving assassins were captured, but later released by West Germany following the hijacking by Black September of a Lufthansa airliner. Israel responded to the killers' release with Operation Spring of Youth and Operation Wrath of God, during which Palestinians suspected of involvement in the massacre were systematically tracked down and killed by Israeli intelligence and special forces. The Israeli operations killed one innocent in Norway and four passersby in Lebanon, with 18 others injured during the killing of Ali Hassan Salameh.

A rescue effort was attempted by the ill-prepared German authorities. It failed miserably.

Initial news reports, published all over the world, indicated that all the hostages were alive, and that all the attackers had been killed. Only later did a representative for the International Olympic Committee (IOC) suggest that "initial reports were overly optimistic." Jim McKay, who was covering the Olympics that year for ABC, had taken on the job of reporting the events as Roone Arledge fed them into his earpiece. At 3:24 a.m., McKay received the official confirmation:


We just got the final word ... you know, when I was a kid, my father used to say "Our greatest hopes and our worst fears are seldom realized." Our worst fears have been realized tonight. They've now said that there were eleven hostages. Two were killed in their rooms yesterday morning, nine were killed at the airport tonight. They're all gone.


Sources as attributed above in embedded links, as well as mixes and various tidbits from Wikipedia.
Posted by Loren Coleman at 6:42 AM