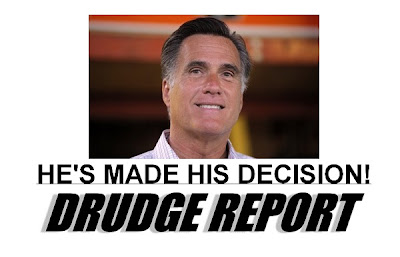 Well, it turns out that all of the noise about this appears to have been Matt Drudge's dreamland scenario. But, as you know now, Mitt Romney has picked Paul Ryan. 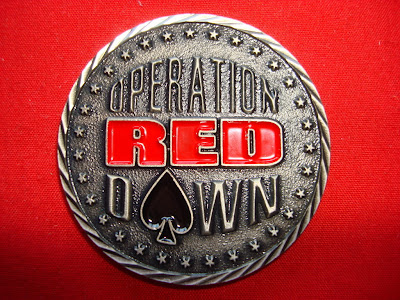 Has Romney pulled a red dawn on us?

Is the man who insisted on changing the name of the Iraqi deployment to "Operation New Dawn" going to be running for a spot in line for the presidency? Is the current head of the CIA about ready to be the vice presidential candidate under Romney? Do you feel like you are in a psy-ops movie? Well, hold on to your hat. 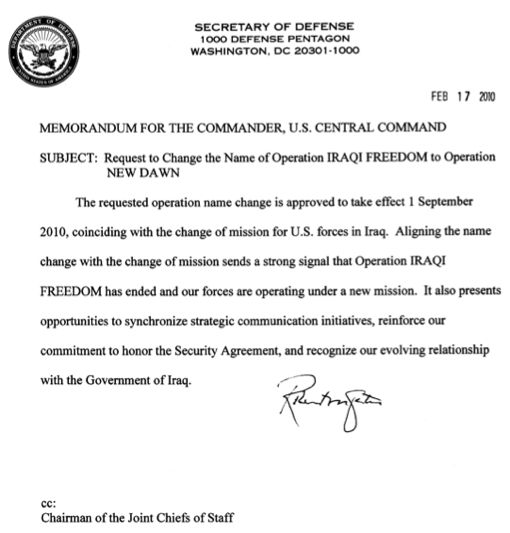 The soldier behind coming up with the name "New Dawn" during the ending phases of the Iraqi War may be helping to move the entire landscape of Campaign 2012 in a new direction.

Do you know that Defense Secretary Robert Gates agreed to General David Petraeus' request to change "Operation Iraqi Freedom" to "Operation New Dawn," a couple years ago? The change went into effect on September 1, 2010. 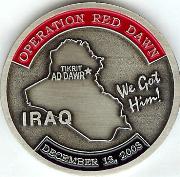 There was also a more focussed "Operation Red Dawn" earlier. Operation Red Dawn was the U.S. military operation conducted on 13 December 2003 in the town of ad-Dawr, Iraq, near Tikrit, that captured Iraq President Saddam Hussein. The operation was named after the 1984 film Red Dawn. The mission was assigned to the 1st Brigade Combat Team of the 4th Infantry Division, commanded by Major. Gen Raymond Odierno and led by Col. James Hickey of the 4th Infantry Division, with joint operations Task Force 121 - an elite and covert joint special operations team. Who do you think came up with that name? 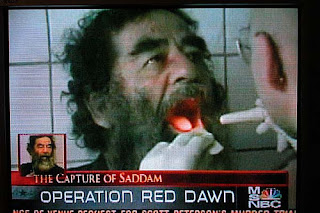 The military operation searched two sites, "Wolverine 1" and "Wolverine 2," outside the town of ad-Dawr, but did not find Saddam Hussein. A continued search between the two sites discovered him in a "spider hole" hide out at 20:30 hrs local Iraqi time. Despite being armed with a pistol and an AK-47 assault rifle, and provisioned with US$750,000 in cash, Saddam did not resist capture. 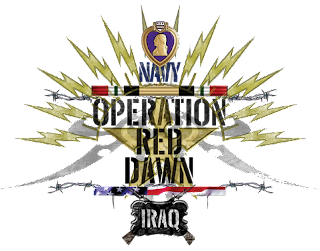 It has been a strange month already, now this. The news has been filled with an alleged former university neuroscience student shooting 70 people in a movie audience in Colorado's Aurora (red dawn) on July 20th. One fourth of the 12 killed in Aurora are said to have been linked to the U.S. Fleet Cyber Command/U.S. Tenth Fleet at Buckley Air Force. According to their Navy site (which they admit is "subject to monitoring"), the "mission of Fleet Cyber Command is to serve as central operational authority for networks, cryptologic/signals intelligence, information operations, cyber, electronic warfare, and space capabilities."

Fast forward to the Sikh Temple shooting of August 4th. The shooter in that incident has been identified as a former psychological operations specialist out of the U.S. Army, at Ft. Bragg, Fayetteville, North Carolina.

Now, the news breaks today that former Governor Willard Mitt Romney may be interested in "New Dawn" General David Howell Petraeus to be his running mate. Who could have seen this new dawn (or is it a storm) coming? 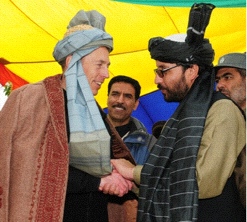 What does Petraeus mean?

Petraeus has its origins in Petreus, which means Πετρεύς (ancient Greek)> πέτρα (both modern and ancient Greek) = stone, rock.

In Greece, the name Petreus in no longer in use, but what is still employed is Petros (which would mean stone if the word petra had a male equivelent, since it is a female word).

To the English-speaking ear, what is most familiar is to think of the origins of the first name Peter.

Peter was derived from the Greek Πετρος (Petros) meaning stone. This is a translation used in most versions of the New Testament of the name Cephas, meaning stone in Aramaic, which was given to the apostle Simon by Jesus.

John 1:42: "And he brought him to Jesus. Jesus looked at him and said, 'You are Simon son of John. You will be called Cephas' (which, when translated, is Peter)."

Simon Peter was the most prominent of the apostles during Jesus' ministry and is often considered the first pope.

Briefly, who is David Petraeus:

General David Howell Petraeus (born November 7, 1952) is the current Director of the Central Intelligence Agency. He was sworn in on September 6, 2011. Prior to his assuming the directorship of the CIA, Petraeus was a four-star general serving over 37 years in the United States Army. His last assignments in the Army were as commander of the International Security Assistance Force (ISAF) and Commander, U.S. Forces Afghanistan (USFOR-A) from July 4, 2010 to July 18, 2011. His other four-star assignments include serving as the 10th Commander, U.S. Central Command (USCENTCOM) from October 13, 2008, to June 30, 2010, and as Commanding General, Multi-National Force - Iraq (MNF-I) from February 10, 2007, to September 16, 2008. As commander of MNF-I, Petraeus oversaw all coalition forces in Iraq. 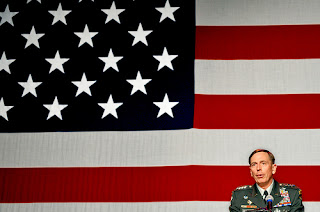 Petraeus has a B.S. degree from the United States Military Academy from which he graduated in 1974 as a distinguished cadet (top 5% of his class). He was the General George C. Marshall Award winner as the top graduate of the U.S. Army Command and General Staff College class of 1983. He subsequently earned an M.P.A. in 1985 and a Ph.D. degree in International Relations in 1987 from the Woodrow Wilson School of Public and International Affairs at Princeton University. He later served as Assistant Professor of International Relations at the United States Military Academy and also completed a fellowship at Georgetown University. 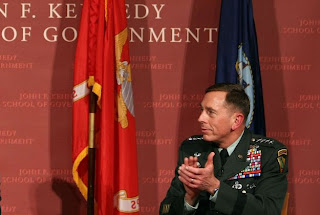 Some news reports have speculated that Petraeus may have interest in running for the presidency, especially after he visited a school known for hosting the presidential debates, New Hampshire's Saint Anselm College. Petraeus lives in New Hampshire. Despite these accounts, Petraeus has categorically asserted that he has no political ambitions. 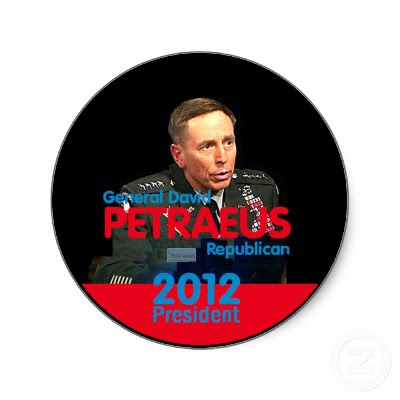 On June 23, 2010, President Barack Obama nominated Petraeus to succeed General Stanley McChrystal as commanding general of the International Security Assistance Force in Afghanistan, technically a step down from his position as Commander of United States Central Command, which oversees the military efforts in Afghanistan, Pakistan, Central Asia, the Arabian Peninsula, and Egypt. 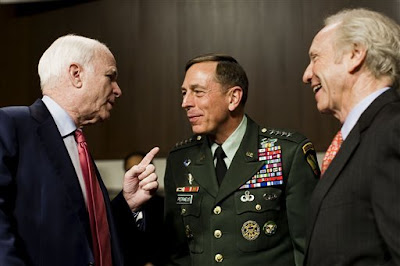 On June 30, 2011, Petraeus was unanimously confirmed as the next Director of the CIA by the US Senate 94-0. Petraeus relinquished command of U.S. and NATO forces in Afghanistan on July 18, and retired from the U.S. Army on August 31.


Petraeus denied any interest in joining the Romney ticket, by day's end.

" Gunmen stormed an evangelical church in central Nigeria, cut the electricity and opened fire once the building was plunged into darkness, killing 19 people, including the pastor, officials said."

What about that Roy Antigua guy from Florida? He had a bunch of government credentials including a full NASA flight suit. A false flag operation by Romney to go to war with Cuba. Antigua is a Cuban native and Romney has said that he would kill Castro if he were elected president.

From March 28 and 30, more military uses of dawn imagery/nomenclature:

The first one mentions Aurora (as Eos). It didn't click until I saw the Petraeus memorandum.

Robert Gates' memo I mean! :) Per the General's request.

As regards the phenomenology of groups (ie, nations & world) morphing into leaders' characteristics & qualities, may I present the following.

As far as his denial, Petraeus first has to be thrown out there to see the initial reaction. That's a no-brainer.

'Behind every great man is a great woman,' with 'great' not to be misinterpreted as solely a positive force. Keep Hitlary in mind here, as she wanted to as long-ago First Lady -- and that's hard to get out in context with her -- 'reform American healthcare.' At the time, considered an inappropriate endeavor for a First Lady, she now has succeeded under Obamacare.

Knowlton = KNOWS a TON = married to now Director of the Central Intelligence Agency. No-brainer, or shall I say all-brainer.

So, that's what is 'behind' David Howell. Let's look at what's before him.

Re the photo above with him in a cloth headdress of some kind, meeting a foreign leader of some kind I shall assume: Looks just like Jean Luc Picard wearing a beaded headdress meeting an alien leader in 'Insurrection.' Unfortunately, even with all the Trekkie stuff out there -- or maybe that has gone out of fashion, all pun intended -- I could not find an online image to link to.

Re Coleman's link to wiki on Petreas:

"During his time at CAC, Petraeus and Marine Lt. Gen. James N. Mattis jointly oversaw the publication of Field Manual 3-24, COUNTERINSURGENCY, the body of which was written by an extraordinarily diverse group of military officers, academics, human rights advocates, and journalists who had been assembled by Petraeus and Mattis." (caps mine)

"Petraeus also stressed the importance of teaching soldiers how to think as well as how to fight and the need to foster flexibility and adaptability in leaders, ... he has been called 'the world's leading expert in COUNTER-INSURGENCY warfare.'" (caps mine)

INSURRECTION: an act or instance of rising in revolt, rebellion, or resistance against civil authority or an established government.

COUNTER-INSURGENCY: a program or an act of combating guerrilla warfare and subversion.

'First Contact' was competing hard here. I do NOT rule that out.

Ignored the Colorado church mass shootings? Not at all.

Besides mentioning it recently, I discussed those incidents in three postings on this blog in December 2007, here:

I always wonder about these events, especially after reading that one fourth of those killed in the Aurora shooting were with US military. IS a staged even masking a sort of 'kill a few birds with one stone' sort of operation?

It's like when a plane goes down, you ask 'who was on board?' and lo and behold the passengers are NOT all just ordinary Joes, there are always a couple of 'persons of interest' on board they get killed... Why is this? Statistically this shouldn't happen, considering just HOW large the population is now!

Thanks for your comments everyone.

This one will be deleted soon, but it's the only way to get a message to those who are not id'ing themselves (you know, "Anonymous").

Listen up!! If you want your comments to be approved, do not put messages in them like "Get God-Centered!" every time. To different folks, do not put down other people and populations for having different points of view.

Vi have here two apostles :Paul and Peter to choose from ?