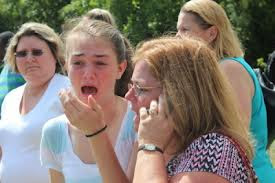 It begins. How will it end? 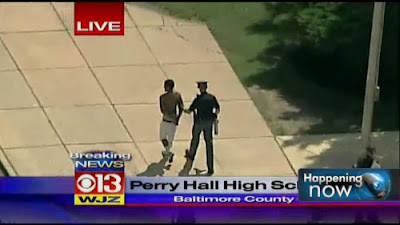 After 2012's Summer of the Gun, no one should express surprise that the first day of the new school year would experience a school shooting. That's how the copycat effect works. 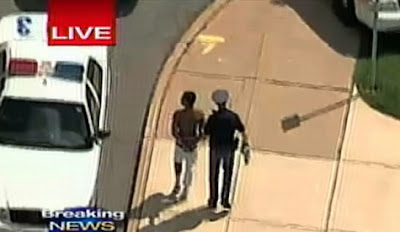 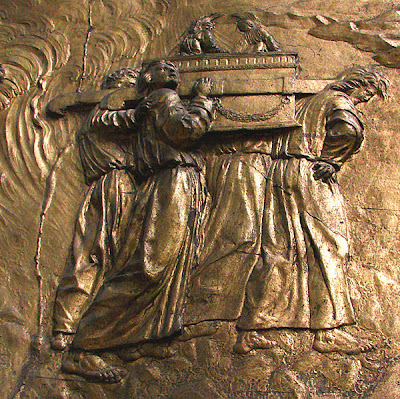 
This was the memorial stone set up by Samuel to commemorate the divine assistance to Israel in their great battle against the Philistines, whom they totally routed (1 Sam. 7:7-12) at Aphek, in the neighborhood of Mizpeh, in Benjamin, near the western entrance of the pass of Beth-horon. Ebenezer is mentioned three times in the Bible.
On this very battlefield, twenty years before, the Philistines routed the Israelites, “and slew of the army in the field about four thousand men” (4:1,2; here, and at 5:1, called “Ebenezer” by anticipation). In this extremity the Israelites fetched the Ark of the Covenant out of Shiloh and carried it into their camp. The Philistines a second time immediately attacked them, and smote them in a great slaughter, “for there fell of Israel thirty thousand footmen. And the Ark of God was taken” (1 Sam. 4:10). And now in the same place the Philistines are vanquished, and the memorial stone is erected by Samuel. 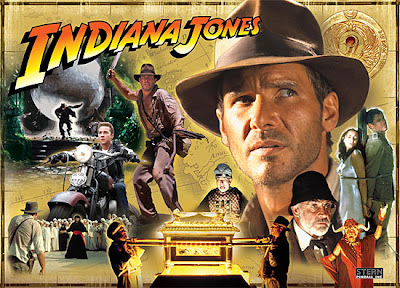 Synchromysticism does happen. Between 9:55 am and 10:17 a.m. EDT this morning, Red Dirt Report editor Andrew Griffin and I were discussing films. He said he had just watched Indiana Jones and the Kingdom of the Crystal Skull. To which I replied,


Synchronicity strikes again: I just read the paper. The one thing that struck me was in the movie section. The only IMAX in Maine, ten miles away, which has been playing Dark Knight Rises since July 20, 2012, is mentioning a [new] choice starting September 7th. Indiana Jones and the Raiders of the Lost Ark, on the IMAX. Interesting you should mention the franchise. 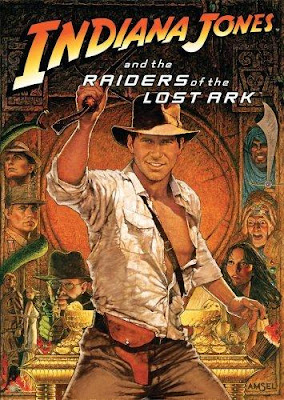 The calls to 911 alerting the police to the school shooting at Perry Hall High School started coming in Monday, shortly before 11 a.m. EDT. 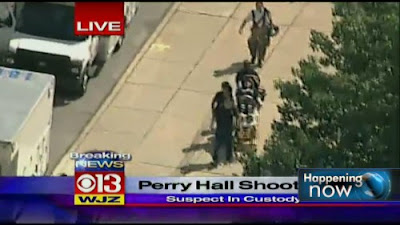 Today was the first day classes for the 2012-13 academic year at Perry Hall High School, located near Baltimore.

Unconfirmed reports published by CBS News indicate the Perry Hall school shooting occurred in the cafeteria and the victim was shot in the back. Parents of Perry Hall High School students also told the local news affiliates that some type of threat about Perry Hall was posted on Facebook, but those claims are also currently unconfirmed. 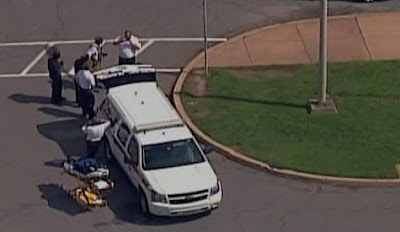 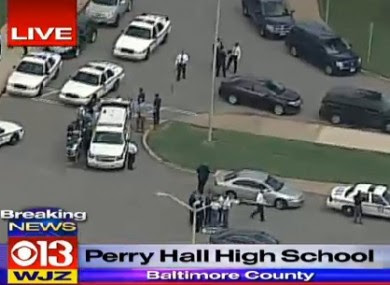 CBS reported the Perry Hall High School shooting victim is 17-years-old and the alleged shooter, 15, was seen being escorted to a waiting police cruiser shirtless and in handcuffs (photos at top). The student shot at the Baltimore high school is reportedly in serious condition. 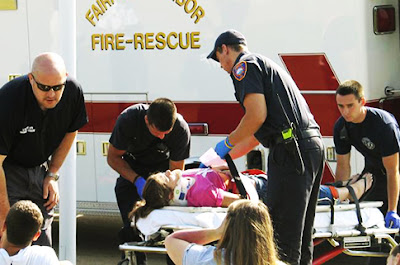 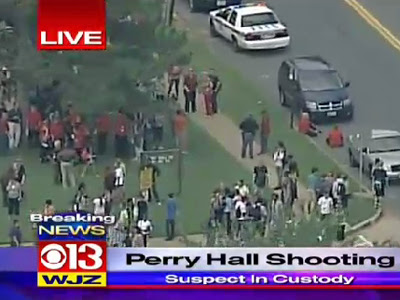 City council member David Marks, who called the shootings "horrific," lives near the Perry Hall High School and told The Baltimore Sun that he is currently hearing “a lot of helicopters” overhead. 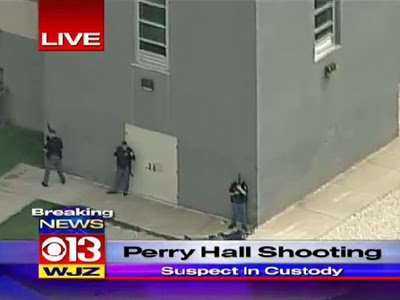 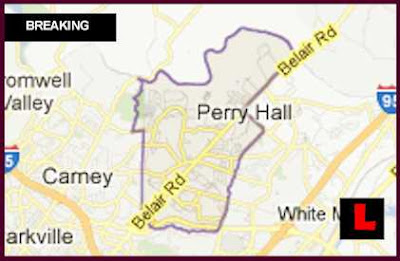 Students are being escorted to the nearby Perry Hall Shopping Center at the corner of Ebenezer Road and Belair Road. "Belair" is from the French, a respelling of French Belleaire, a nickname for someone with a pleasant demeanor, from belle "lovely" + aire "demeanor," "manner." For more about the name "Bell," see here.

Update: The suspected school shooter is 15-year-old Robert Wayne Gladden, Jr., who has been charged as an adult with attempted first degree murder and first degree assault. He is being held without bail at the Baltimore County Detention Center. (For more on the "Wayne" middle name game phenomena, see here, here, and here.)

In 1987, the John Waters movie Hairspray was filmed at Perry Hall High School.
Posted by Loren Coleman at 2:09 PM

While a shooting on the first day of school might not come as a surprise, a shooting at that particular school is a huge, huge shock to those of us in the area.

Loren, and I'm sure John Waters has your book...

My kids started school in Baltimore today. Night before school started I was gripped with an unusual anxiety.. Keep in mind I've done the first day run for ten plus years, and in balto city, you worry less about lone nuts than about, well Baltimore. But I was gripped by this presentment that something was going to happen at a school. Somehow I knew my kids would be ok, and dismissed it as anxiety from the recent violence not only in the us but worldwide.

Again I cannot emphasize enough that I have lived in Baltimore city my whole life and truthfully horrifying things happen here all the time. These things are totally unreported by national media, I guess because it happens so much and black people don't matter as much to the powers that be. Since ok city (and my family is from ok city) it has upset me how much attention is focused on events which happen every day here. What is it, body count? We have that. Relationships mong the people involved? Check. Frankly, they aren't white. Baltimore is thine of the worlds most haunted cities.

In short, Iif you grew up here and have kids in the schools you develop filters, so my presentment felt odd. Then I hear about this from my office mate this morning.

To be clear, perry hall is an old inner ring suburb and while it orients towards Baltimore, it's not Baltimore proper.

Howeve, there have always been a lot of urban legends in this city and on its eastern edges near te port about perry hall particularly about te old estate and hauntings. It's a bit of a liminal space actually, and always seemed like more of a postal addresstan anything else. Perry halls neighboring communities white marsh, Essex, Dundalk, park like are where people actually say tey live or come from. No one comes from perry hall.

Lord I had a lot of typos. If you find it in your heart to correct them I'd be humbled.

Jeezus....John Waters?, why is it he seems like a stooge? The overtly flamboyant films prbably indicted an entire subculture of gay-ness that needn't have been so accepted by types of homosexuals...except it seems to have created a tranny-fied effect in that community.

So it seems when we are honest about the connections and conditions Hollywood creates with our gov.

They have always had specific highschools, towns, and cities "on tap".

Being that it's the FIRST day of school I wonder how many people knew these students at all....

"Claire Carton" and others: No, I cannot correct your spelling. Unlike Wordpress and other blog platforms, blogger.com does not allow for edits or corrections of comment makers' comments. Therefore, while a comment can be approved or rejected, it cannot be modified or edited.

Sometimes comments containing profanity, off-topic subjects, personal advice, incredibly bad spelling, personal attacks, and spam are not posted. But, in general, all others are approved, unchanged, for posting.

My suggestion: Make comments on Twilight Language often, but, especially if you are feeling emotional, proofread them a couple times before clicking "Publish Your Comment."

Thank you for understanding.

WoW! Lots of interesting synchronicity with this event. Really enjoy your blog.