U. S. Marines Shot in Mexico 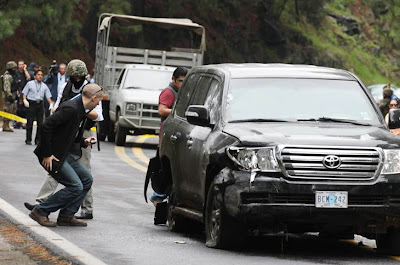 U.S. Marines were injured in a shooting south of Mexico City on Friday morning, August 24, 2012, a Marine official told CNN Mexico. With the news of the shooting at the Empire State Building on this same morning, the U.S. media is not following this story closely. 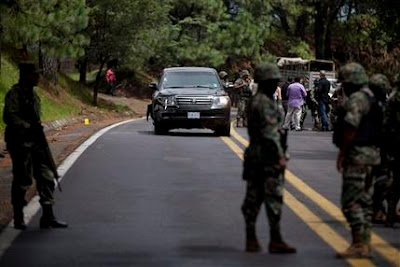 Military personal stand guard around an armored U.S. Embassy vehicle after it was attacked by unknown assailants dressed as Mexican police, on the highway leading to the city of Cuernavaca, near Tres Marias, Mexico, Friday, Aug. 24, 2012. Two U.S. government employees (Jess Hoods Garner & Stan Dove Boss) were shot and wounded in an attack on their armored SUV, south of Mexico City on Friday, a law enforcement official said. (Credit: Alexandre Meneghini)

Red Pill Junkie, our Mexican correspondent, points out that this location, "near Huitzilac, seems to be the same place where a Mexican general was murdered in 1927 on October 3rd (which is RPJ's birthday). The name of the general was Francisco R. Serrano. He wanted to run for president, but formerly the Revolutionary warlords dealt with their enemies in a traditional and customary fashion." 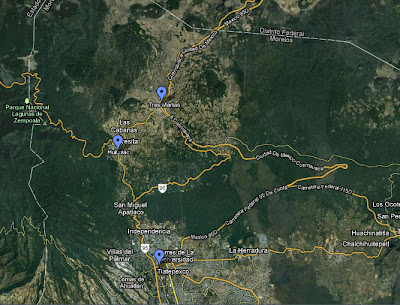 A book La Sombra del Caudillo by Martín Luis Guzmán is based on the incident, as well as an old movie too.

The motive behind the attack on the American servicemen, who were on a diplomatic mission, was not immediately known. 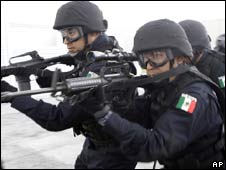 Unknown gunmen inside what was described as a Mexican federal police vehicle fired upon a U.S. Embassy vehicle that carried the U.S. servicemen, said the official, who declined to be named for security reasons.

The injured Marines were transported to a hospital in Cuernavaca, Mexico.

The story is changing. The AP out of Mexico is spreading the following, after 5 PM Friday:


The Mexican Navy says federal police shot at a vehicle carrying two U.S. government employees after the vehicle came under attack from unidentified gunmen.
The shooting appears to have been a case of a confused gunbattle that broke out on a rural road just south of Mexico City.
The Navy said Friday the embassy personnel were heading down a dirt road to a military installation when a carload of gunmen opened fire on them and chased them, along with a Navy officer accompanying them.
Alerted to the gunfire, a federal police patrol vehicle came to the scene and apparently opened fire. The statement does not make clear whose bullets injured the U.S. workers. 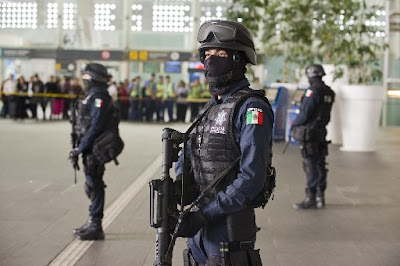 Violence of this kind has occurred before, recently. Gunmen killed three federal police officers on June 24, 2012 outside the arrivals area of Mexico City's international airport. Witnesses told Mexican media that the killers also were dressed in federal police uniforms and ran from the airport’s Terminal 2 following the shootings. After the shooting, the entire security staff at the airport was replaced.

In 2011, one U.S. Immigration and Customs Enforcement agent was killed and one wounded in a drug gang shooting in northern Mexico.

A drug-gang shooting In 2010 in the border city of Ciudad Juarez killed a U.S. consulate employee, her husband and another man.

Recent attacks against U.S. military in Afghanistan have involved shootings by individuals dressed or disguised as law enforcement officers for Afghanistan, supposedly allies.

A NATO soldier was killed on Sunday, August 19, 2012, by an Afghan police officer, raised the coalition death toll from so-called "green on blue" or "insider" shootings during the last 11 days, as the United States urged Kabul to step up screening of recruits.

On Sunday [August 19, 2012]...an Afghan in a police uniform shot dead a Nato soldier.
The victim was the 10th US soldier to die in such an attack in two weeks.'
Two American soldiers were killed in another incident on Friday, a week after six were killed in a single day on 10 August.
Currently, approximately 130,000 ("blue") Nato troops are fighting insurgents in Afghanistan alongside 350,000 ("green") Afghans.
Sunday's shooting brought the total number of International Security Assistance Force (Isaf) personnel killed by members of the Afghan security forces this year to 40, with most of the victims Americans.
There were 35 such deaths in all of 2011.

Posted by Loren Coleman at 2:11 PM

Tres Marias are the 3 Marys.

Mary my mother.
Mary the 7 demon possessed.
Mary the cleansed tower out of the waters.

Mexico and Spain are code for death.

Yes like New Mexico and the Road of the Dead Man .. crossing itself AL-BOO-QUEER-KEY as Galloi.

>"Violence of this kind has occurred before, recently. Gunmen killed three federal police officers on June 24, 2012 outside the arrivals area of Mexico City's international airport. Witnesses told Mexican media that the killers also were dressed in federal police uniforms and ran from the airport’s Terminal 2 following the shootings."

That's because ***THEY WERE*** police officers.