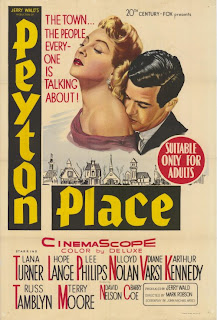 I investigate and try to understand the links between the modeling of suicidal behavior in popular culture and media, such as in movies, and self-deaths that come later. History - in fiction and fact - based on contagion theory - appears to repeat itself.

The suicide cluster of teenagers in the Camden-Rockport-Rockland, Maine, area, during the 1970s and 2000s - often due to death by hanging in their closets - has been of great concern to me for several years. The high suicide rate for Camden's Knox County is likewise troubling.

In 2006, I made a disturbing "coincidental" discovery regarding Peyton Place. The method and location of the suicide depicted in the movie is chilling and significant. The most graphic suicide to be included in a modern American movie up to that time occurred in Peyton Place, a film that changed the subject matter parameters of moviemaking forever. In the plot of the film, the character Nellie hangs herself in her "friend" Connie's teenager daughter Allison's closet.

The motion picture Peyton Place (released December 13, 1957) was filmed in Camden, Maine, and the surrounding New England countryside. References to Maine, such as having the prosecutor (played by Lorne Greene) being sent from Portland, are throughout the film. (Ironically, this is a technical mistake; the prosecutor would have come from Augusta.) 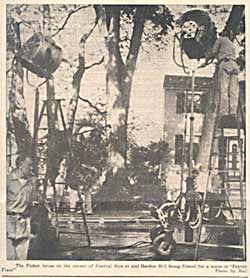 Filming of a scene on Main Street
opposite the Camden Public Library
Photo by E. Hamilton Hall

Peyton Place is a story about the lives and loves of the residents of a small New England town in the years immediately preceding and following World War II. Behind the town's tranquil façade hides scandal, homicide, suicide, sexual deviance, and moral hypocrisy.

Peyton Place specifically follows the story of Allison MacKenzie, a teenager with dreams of becoming a successful novelist, and her mother Constance "Connie" MacKenzie. Connie has been harboring the secret for years that Allison was born illegitimate from an affair Connie had with a married businessman, and her greatest fear is that Allison will find out the truth about her parentage. Allison's best friend is Selena Cross, who was sexually and physically abused by her stepfather Lucas.

Allison is attracted to Rodney Harrington, the only son of the richest man in town. However, Rodney becomes involved with "good-time girl" Betty Anderson, who becomes pregnant by him; Rodney is eventually killed in a car crash. Selena becomes involved with Ted Carter, but tragedy strikes her: she is raped multiple times by her stepfather Lucas and eventually becomes pregnant. Selena's mother, Nellie Cross, dies by suicide in Connie MacKenzie's house, and her body is discovered by Connie's daughter Allison, traumatizing her.

Those are some of the initial events in the story, according to various summaries easily found online.

The "real" Peyton Place is not Camden, Maine (the filmsite) or Gilmanton, New Hampshire, where Grace Metalious lived when she wrote the novel. Peyton Place apparently, instead, is a fictional composite of the nearby towns of Laconia, New Hampshire (where Grace Metalious allegedly did most of her drinking), Belmont, Gilmanton and other nearby villages.

Camden, Maine still celebrates its role as the location for the film. For example, the promotional material for the Blackberry Inn notes it hosted the Peyton Place cast party after the filming ended. Other locations around the town are likewise highlighted in printed and online references.

The firstl Camden Film Festival appears to have developed out of the local Chamber of Commerce's interest in celebrating the links Camden has to the original Peyton Place motion picture, when they invited various stars to town. For example, during a more recent Camden Film Festival, held on May 4-7, 2000, several Peyton Place-related lectures and screenings were presented. Also an informative Peyton Place bus tour to locations used in the film was conducted.

Visiting Camden you will be able to locate helpful people who know about the film sites, as well as local resources to assist you.

Loren, this is a fascinating—and chilling—case history and can of worms you've opened. It adds another wrinkle to the entire PEYTON PLACE legacy; it was curious to me to find that even today, the author of the original novel is shunned as a topic of research and conversation in her home town, even in its Historical Society circles.

I was watching a short doc. from Vice Magazine on youtube called Suicide Forest in Japan. In the documentary, a scientist (who studies volcanoes) explores Aokigahara Forest, a huge forest where people from the city come to commit suicide. The description says that
"After the novel Kuroi Jukai was published, in which a young lover commits suicide in the forest, people started taking their own lives there at a rate of 50 to 100 deaths a year."
According to Wikipedia, the novel "Jukai Black" was a feature length mystery novel. published in 1960 with an accompanying TV series about a young lover who goes to the forest to commit suicide. The narrator in the documentary makes a point that feudal japan suicide was very rare, and was mainly a samurai thing, and that the suicide rate was a modern phenomenon. Kinda makes one wonder about the post WWII Western influence.